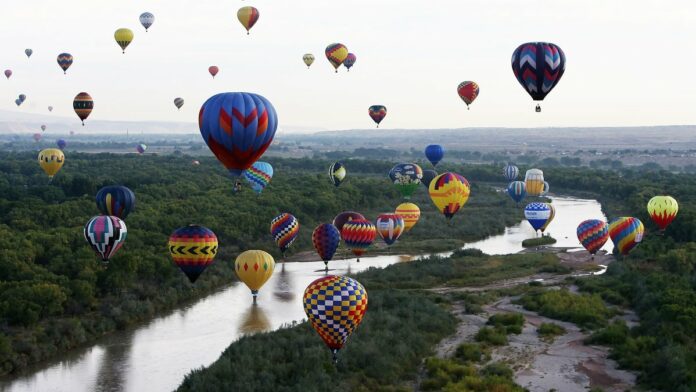 We get it—summer gets all the festival glory. But the celebrations don’t quit just because the temperature drops. Toss on a few extra layers, then head out to stuff your face with tacos and tequila, shred on Sedona’s famed slickrock trails, or relive the ’90s with Eddie Vedder and friends on the California coast. All that matters is that you’re having a good time.

Pack sunscreen and a towel, then head over to SoCal’s Doheny State Beach and let Eddie Vedder be your host for the Ohana Festival (from $159), three days of oceanside music curated and headlined by the Pearl Jam front man. As you might expect, his tastes run a bit guitar-heavy: other performers include Stevie Nicks, P!nk, and Jack White. Between sets, wander over to the Storytellers Stage to hear inspirational talks from conservation-minded adventurers, artists, and athletes. Past speakers have included freediver Kimi Werner and pro surfer Greg Long. Admission is steep, but part of the proceeds benefits park-loving nonprofits, including the Doheny State Beach Foundation and the San Onofre Parks Foundation.

Loosen up those neck and shoulder muscles, because you’re going to spend a lot of time gazing upward during the wondrous Albuquerque International Balloon Fiesta (from $15). Be sure to catch Mass Ascension daily at 7 a.m., when hundreds of colorful hot air balloons fill the morning sky. It’s equally magical when they’re illuminated at dusk. If your neck needs a break, hit the street fair–style concession area in search of green chile delights like chile-topped enchiladas and cheeseburgers, or watch the sawdust fly during daytime chainsaw carving demos.

It’s all in the name, folks. When it launched in 1982, the Great American Beer Festival (from $95) featured two dozen breweries; this year, at the festival’s 40th anniversary, attendees can sample more than 2000 suds. The paradox of choice is a bit head-spinning (or is that the alcohol?), but beerhounds in the know venture to the Heavy Medal booth to swig the festival’s blue ribbon brews. To ensure you remember to eat a little something between sips, take cues from event veterans, who drape pretzels, beef sticks, and even hamburger buns around their necks like so many carb-laden Flavor Flavs.

West Virginia’s New River Gorge is well regarded as one of the premier climbing areas in the country. To some, it’s an even better place to catch some air. For almost 40 years, adventurous types have flocked to its 876-foot-high namesake bridge (the longest of its kind in the Western Hemisphere) for Bridge Day, a celebration of gravity—or the defiance thereof. While the free event is best known for showcasing BASE jumpers, others take the opportunity to rappel or cruise down zip lines. For spectators, the views can’t be beat.

Get ready to kick off the winter season with Warren Miller’s 73rd annual ski and snowboard film Daymaker. Take a journey from British Columbia to Greece’s Olympus Range, Alaska, and beyond. Come for the ski season stoke and leave with swag, signed posters from the athletes, including Marcus Caston, Mckenna Peterson, Cam Fitzpatrick, Lexi duPont, Connery Lundin, and more. Even better, Outside Plus members get early access, first dibs at the best seats, and a custom tour poster. Can’t make it to Salt Lake City? Check out warrenmiller.com to find a screening near you.

On the heels of successful events like Color the Crag, Black Girls Boulder is launching their inaugural BLK Out Boulderfest, which celebrates Black excellence in rock climbing. Admission to the retreat (from $49) includes lodging at the Crash Pad, a welcome night food truck ticket, gift bag, festival weekend pass, raffle ticket, transportation (within Chattanooga) or free parking, and a guided bouldering workshop.

Ladies, non-binary, and genderqueer femme cyclists, this one’s for you. Bring your own wheels or demo some of the raddest mountain bikes on the market during dozens of group rides on Sedona’s iconic sandstone slickrock. When you’re done living out your singletrack dreams, head back to Roam Bike Fest’s event headquarters at the Red Agave Resort for yoga, film screenings, workshops, dance parties, and a SHRED talks panel. Happy hour drinks (boozy and non-alcoholic) are optional; stoke is not.

Taco enthusiasts, rejoice: heaven awaits at the Arizona Taco Festival (from $15), where nearly 50 restaurateurs will vie for your affection by slinging little bundles of tortilla-swaddled joy for three bucks each. You want hot sauce with that? There are 100 varieties on hand. Same goes for tequila. Oh, and there’s a lucha libre wrestling arena, a beauty pageant for chihuahuas, and, obviously, a taco-eating contest. Feeling brave? See if you have what it takes to out-sweat fellow capsaicin lovers in a pepper-eating showdown.

Need to Street Journey Throughout the American Southwest? This Is How...

The Father Of Outside Pursuits In New Zealand, Sir Graeme Dingle,...