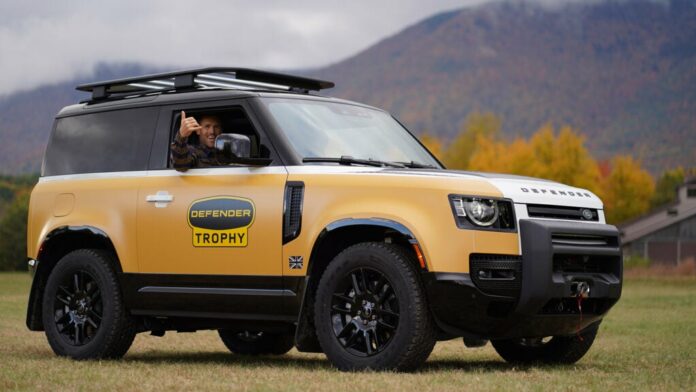 During prime leaf-peeping season in Manchester, Vermont, 15 teams of two walked through the early morning mist. The paired drivers were here for a one-of-a-kind event and gathered around the master of ceremonies, Sean Gorman, the Land Rover experiential director. They had all come to participate in the Land Rover Trophy Competition, an off-roading challenge for Defender Trophy Edition owners and Defender enthusiasts. The event showcases the capabilities of the all-new Defender Trophy Edition, a vehicle that was developed in honor of the iconic 4×4’s long-standing expedition legacy.

The original Trophy competition was held annually between 1980 and 2000 in locations around the world. All of the Land Rover vehicles were used throughout the years, outfitted with expedition, recovery, and safety equipment and a “sandglow” color treatment. That legacy is apparent in every detail of the two-door Defender 90, which includes features like all-terrain progress control, an air suspension pack, advanced off-road capability, and, of course, the distinctive yellow wrap applied just for the present-day event.

Competition might not be quite the right word to describe the event. The skill tests are real, but so is the fun of meeting other Land Rover lovers, driving through hardwood forests at peak fall colors, and spending time at Vermont’s deluxe Equinox Resort. For this year’s Land Rover Trophy Competition, in early October, participants came from all over to compete in five waves of 30. They were a diverse group—friends, family, married couples—with one thing in common: a relationship with their Land Rovers (yes, often more than one) that had become a lifestyle. Many had experienced the Trophy event before and had put it on their must-do vacation calendar. An opening dinner where contestants displayed handmade flags (which they were later tasked with flying at the top of Mount Equinox as part of a challenge) and a closing awards ceremony provided ample opportunities for friendly trash-talking and team bonding.

The contest consisted of 13 tasks and challenges designed by Gorman, an imposing figure with a sense of humor drier than the deserts these vehicles are capable of cutting through. He’s the main designer of the competition and has brought a creative flair to the job. As much as he wants participants to have fun, Gorman also wants to make them sweat. People have different levels of off-road knowledge and fitness, so the competition rewards a variety of strengths—teamwork is just as crucial as being able to run a mile.

First test? Find your keys. At the start, competitors had to navigate local trails, solving riddles along the way for directions until they reached the shore of Equinox Pond. There, an orange foam bridge jutted out into the water. One team member had to cross this bridge to the raft on the other side, where the keys to the Defender Trophy Editions were tied up. “The trick is to send the person who weighs the least,” advised one of the Land Rover guides working this challenge.

Good advice, but not everyone listened. Four men barrelled out of the trail, ran across the bridge, and soaked their jeans before retrieving their keys. Then a slight woman came along and ran light-footed along the bridge, barely getting her feet wet. Upon returning to dry land, she threw her hands up in celebration and got a picture with the women spectators who had been cheering for her. She wasn’t the fastest off the block, but she showed right away that there’s more than one way to win.

Competitors come in with all levels of experience. Some are avid off-roaders; others want to try something new. Some came for nostalgia, as was the case with Andres Berl and Hernan Marambio, teammates who used to off-road in the Brazilian bush 30 years ago, before they became friends after both moved to Westchester, New York. “I love off-road driving and did it a lot when I was younger,” Hernan said. Both Hernan and Andres were impressed with how much off-roading technology had changed, particularly during one of the off-road challenges called the Cone Zone, where drivers had to use the vehicle’s air suspension to precisely hit a target on the right front windshield while dealing with roller-coaster terrain. “I was surprised how effortlessly the Defender managed all the off-road driving and how comfortable we were inside,” Andres said.

At the other end of the spectrum were the off-road novices. “I don’t drive anything off-road. I don’t even drive off-road stuff off-road,” said Stacy Tierney, one half of a husband-and-wife team from Texas. “That all changes today,” she said after proving to be an expert at the Peru Course, which featured twists that were tighter and more technical than they first appeared. Flexible poles lined the course; hitting one earned drivers a time penalty. Stacy didn’t touch a single pole, thanks to her impeccable driving and the Defender’s expert handling.

Like Stacy, other off-road novices loved learning new skills. Nancy Bryan, the woman who scampered across the orange bridge, said her favorite part of the competition was successfully driving up and down hills she didn’t think were possible in a vehicle. “I loved learning how winches work, and the ability of the vehicle made it not only possible but fun!”

Nancy didn’t have decades of Land Rover passion like some of the other participants, but her connection to the brand is powerful. Nancy’s husband died three years ago, and it was always the couple’s dream to buy a Defender. She had a dream one night in which her husband asked why she hadn’t bought the vehicle yet. So she went out and got it. Now, she takes her granddaughter and her friends in the back of her 1989 Defender 110 to get their nails done. She also has a 2022 Defender 110 V8. Nancy did the Trophy competition with her son JT—they were team seven, a random assignment that also happens to remind her of her husband. “I’m living the best life for both of us,” she said.

At the closing event, veterans and first-timers celebrated like old friends, already talking about how they were looking forward to doing the challenge again in the future. Turns out this was a competition with a lot of winners.

Founded in 1948, Land Rover designs and engineers its vehicles in the United Kingdom. For over 70 years the brand has built a reputation for providing its clientele with some of the most luxurious and capable vehicles in the world; whether driving through the heart of the city or traversing the countryside on- and off-road. Today’s Land Rover lineup includes the Defender; Discovery and Discovery Sport; Range Rover, Range Rover Sport, Range Rover Velar and Range Rover Evoque. Land Rover is fully engaged with sustainability initiatives and social concerns with continuous involvement in environmental and community programs. For more information, visit the official Land Rover website at www.landroverusa.com.

Most in B.C. agree out of doors recreation helps psychological well...

Outside Recreation Research | The Nature Conservancy

From Addict to UW graduate, Ginny Burton is on the high...