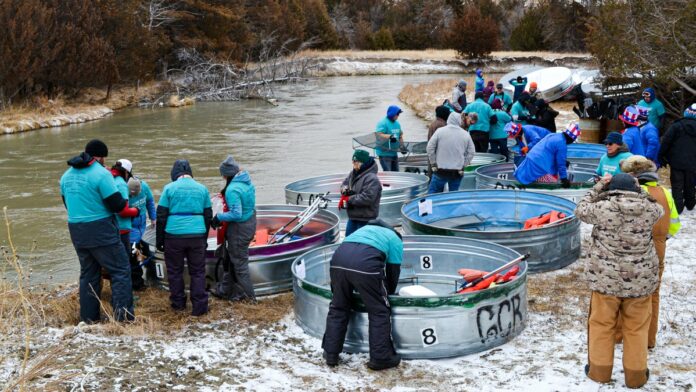 By nine o’clock the next morning, we’re snaking through a mixed-grass prairie in an overheated school bus, knee to knee with our competition, gulping air beneath bib overalls and too much flannel. In true Nebraska fashion, the temperature plunged roughly 30 degrees overnight, and it’s now just below freezing. The Sandhills glitter with snow, and I can picture a finished canvas hanging in the window of CaLinda’s Pot Shop and Art Gallery already: the marble sky, the frosted bunchgrass, the empty road winding through the hills. My brain is throbbing and my stomach uncertain, but for a minute I drift away, lost in a familiar reverie.

More than once, I’ve hiked this baffling landscape and experienced something close to religion. I’ve uncorked its intoxicating silence. I’ve sipped the melancholy. I’ve traced the wind for miles: from the cottonwoods shimmering along the river to the cedars swaying behind the farmhouse to the cattails dancing in the pond beside me. It never grows old. This land may be private, I thought during a brief moment of clarity, but the wonder is mine to keep.

Five miles later, we stagger from the bus into a valley cluttered with cedar trees. A dozen shining stock tanks crowd the banks, equipped with aluminum paddles and custom seating. We find one labeled Creek Boys, toss our coolers in the middle, and huddle around it like the simpleminded bovines for which these troughs were originally intended. As Glidden promised, there’s plenty of water in the river. It flows swift and steady behind us, the epochs laid bare in the muddy cliffs above. The Creek Boys self-medicate with a little hair of the dog, and because one of them is a pharmacist, I relent.

Our starting times are staggered by three-minute intervals, and as we watch the first few teams push off, barking commands and churning water and finally vanishing around the bend, we briefly contemplate trying to win. All of us were athletic enough in high school to feel the old spark of competition, and I can see it now in Jared’s eyes especially—he’s watching the other teams, studying their technique. He stands a little taller, grips the paddle tighter. Beside him, Scott cracks another beer. He watches it foam over the lip and drip into the grass.

We shove our tank into the water and scramble aboard. We sound like a garbage truck, empty cans rattling across the steel floor, boots hitting bodies, the pathetic grunts and groans of 34-year-old men whose experience with the gym is mostly historical. Squatting onshore, a teenage volunteer grips the steel rim, waiting for the signal.

“Is this thing watertight?” Bill asks.

An SUV parked on the road above honks twice, and suddenly our tank is spinning and the shore is receding and the Creek Boys are dragging their asses from one side to the other, vainly searching for equilibrium. We crash into the muddy cliffs once, twice, three times before we round the first bend and drop our paddles altogether. Grassy islands braid the river ahead. Ruddy cedars jut out from the banks. The sky is flat and gray; Bill ups the volume on Boston’s “Let Me Take You Home Tonight” without cracking a smile. For a minute, we fall silent.

“Can we do our best to not just spin this thing in circles?” Scott finally asks. He sounds like middle management, careful with his pronouns. “Because I will throw up.”

Control is largely theoretical in this sport, the hulking tanks far less cooperative than a canoe or kayak. Still, most teams intuit the process: how to coordinate their paddling to minimize the spins; how to spur the tank forward or rein it back, however briefly, to avoid collision; how to read their teammates; how to follow the deepest channels; how to anticipate the obstacles ahead. Our team, however, does not.

We spin. We glide. I throw up (just a little). Jared unzips the cooler.

Out of doors actions are centerpiece of inauguration of St. Paul...

The deadline for the @UIAAmountains Safety Award is ticking nearer! ...