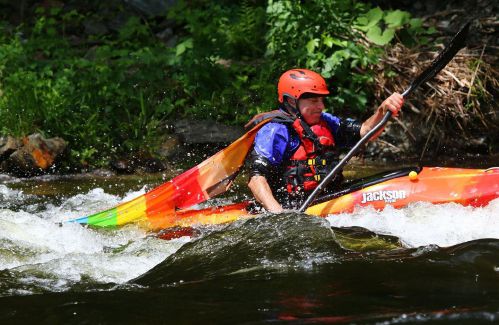 CHARLEMONT – Deerfield Fest, a 28 year old festival and fundraiser to celebrate the agreement between the Deerfield River recreational companies and the energy companies that operate dams on the river, will take place on Saturday 6th August.

In 1994, a settlement agreement was reached that fixed the number of days during the warmer months that dams on the Deerfield River release water, allowing residents and tourists to flock to the banks of the river for a variety of recreational activities.

The festival is hosted by American Whitewater, a non-profit organization founded in 1954 to conserve rivers for recreational purposes. According to Bob Nasdor, Northeast Stewardship Director for American Whitewater, the group played a key role in finalizing the agreement in 1994 and continues to push for other conservation work across the county, including the dam at Turners Falls.

“If we didn’t have access to the river on a set schedule, Berkshire East and Zoar would not be able to operate,” said Nathan Marr, director of marketing for Berkshire East Mountain Resort. “It’s critical that American Whitewater is with us to ensure these releases continue to happen, and that’s why the event is so important to us.”

People are expected to be boating, swimming and rafting on the Deerfield River all day, after which they are invited to stop by Berkshire East from 5pm to 10pm for the festival

Marr said attendance varies wildly depending on weather conditions, but in previous years there have been between 200 and 500 participants.

This year’s Deerfield Fest features 20 vendors, food, drinks, two bands and a silent auction. Admission is $10, which supports American Whitewater. In recent years, Nasdor said, $20,000 has been raised for the organization.

“The primary focus is not fundraising,” Nasdor said. “It aims to build a community and educate about river restoration. Above all, this is meant to be a celebration of outdoor recreation.”

According to Nasdor, about 50,000 people use the section of the Deerfield River where Zoar Outdoor is located for kayaking, rafting and tubing.

“There’s an expression in conservation, you have to love it to protect it,” he said. “Part of this event is to give people a chance to love being on the river.”

From conducting analysis to purchasing on-line, from counterfeit merchandise to manufact…

These adidas Males’s Swift Run X footwear are on sale for...

What It’s Wish to Via-Hike the Appalachian Path as a Transgender...

Transoceanic Rowing Is the Craziest Endurance Sport You’ve By no means...

Useful 3D Printed Carabiners For Outside Use (Tenting & Backpacking)

Aurora Ohio gives indoor and out of doors enjoyable, meals and...