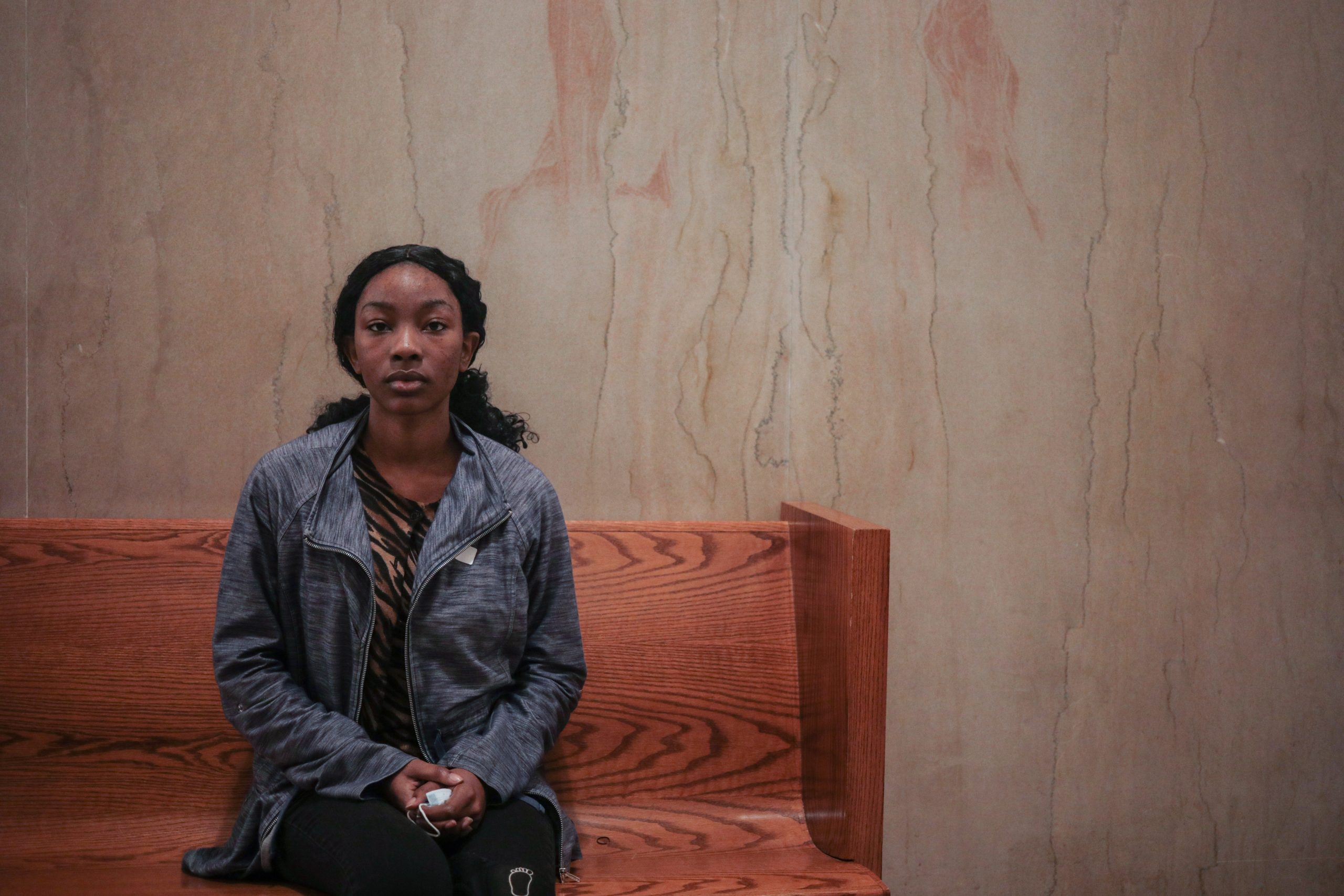 The slim 22-year-old with shoulder-length locks hobbled down the courthouse hallway wearing a large knee brace.

Alynnei Neal, a cleaner, had injured her knee sweeping the floor, but that was the least of her worries on this March day. Her California-based landlord had filed an eviction lawsuit against her, and she was trying to avoid losing her home.

Neal fell into arrears on her rent after her car died and she began paying coworkers to ride to work.

She attempted to apply for emergency rent assistance through home901.org — the $46.5 billion federal program that allows people to withhold rent on their homes — and called every number she had related to the local portion of the program could find. But she had had no luck.

So Neal came to court to attend one of the hundreds of eviction cases that took place that day.

In Shelby County, eviction requests have risen steadily over the past year and have recently reached pre-pandemic levels. Both here and across the country, eviction requests had dropped significantly during the pandemic thanks to moratoriums on evictions, the ERA program, and other pandemic-inspired government assistance programs like expanded unemployment insurance.

As evictions now accelerate, Memphis and Shelby County have approximately $80 million in ERA funding available. They spent more than $50 million last year to help over 15,000 homes. But they recently received an additional $72.5 million that the federal government originally sent to the state of Tennessee because the state was too slow to give it away.

In August, MLK50: Justice Through Journalism examined shortcomings in local fund-disbursement efforts — including a complicated application system and a lack of outreach, staff, attorneys and judge approval.

In the months since, the application process has been simplified, word of the help has spread, and the local program has hired more full-time staff.

But as more evictions are filed, MLK50 has still found tenants, like Neal, struggling to complete the application, attorneys still overwhelmed, and judges not recommending the program to tenants.

With so much money left on their hands, local program leaders are scrambling to figure out what’s next. Do they focus on the immediate, urgent work, or do they look long-term?

The Shelby County General Sessions Civil Court has six judges. Half of them regularly ask tenants facing eviction whether they have applied for the ERA program.

Luckily for Neal, the judge in their courtroom was one of them. He delayed her case so she could speak to the ERA representatives, who manned the legal office down the hall.

A sign directs tenants of the Shelby County General Sessions Civil Court to the office where district officials can assist them with the emergency rent assistance program.

Unlike during most of the pandemic, the space is now manned on Mondays, Wednesdays and Fridays by “screeners” — Shelby County employees trained to help people apply for the funds — as opposed to attorneys. The move, which Shelby County promised months before it was completed in March, frees up the program’s attorneys to attend hearings and employment contracts with landlords, according to Webb Brewer, an attorney who helps guide the local program’s legal side .

Brewer, who worked with Neighborhood Preservation Inc., had stopped his small team of attorneys from helping tenants in the courthouse before reinforcements from the county arrived. After a few attorneys left, Brewer left the legal duty room empty so the remaining attorneys could focus on resolving cases.

But Brewer knows that decision had consequences. The judges who referred tenants to lawyers couldn’t send them to a physical location during those months, and tenants who were having trouble applying online couldn’t come by to ask questions. Brewer said he knows applying online can be difficult for older Memphis and residents who can only access the internet through their phones, calling it a “glove.”

“I worry about … people’s experience and whether they can pull through,” Brewer said. “It’s a system that relies heavily on technology.”

After speaking with the screeners, Neal was impressed by how helpful they were with the application process.

As she limped toward the courthouse exit, she hoped everything would be fine.

Since August, Memphis and Shelby County have steadily improved to bring renters money.

During January and February, the joint local effort distributed nearly $10 million of the funds, bringing the total allocated to approximately $50 million. That puts the city and county in the top 20% nationwide for the speed with which money is initially distributed.

When asked how the program has helped so many renters as we enter 2022, Shelby County director of community services Dorcas Young Griffin acknowledged her team’s fine work but primarily spoke about the unfortunate realities facing many people in Memphis are facing.

Her team hasn’t bothered to find people who want the funds, she said, because rent rates are rising fast and many of the other federal responses to the pandemic are waning.

With such a constant barrage of applications, the program continues to only accept new applications for the first two weeks of almost every month unless applicants are facing imminent threat of eviction.

This red-light, green-light approach has been frustrating and confusing for some renters and landlords. A landlord told MLK50 the program has not accepted new applicants who are not at risk of eviction since Jan. 1, which is not true.

One way the program has changed since early April is that renters are now eligible for funds a second time, as long as there’s no more than 18 months’ rent between either time.

Young Griffin said her team decided to make the change after receiving the additional $72.5 million that the federal government originally sent to the state of Tennessee. She had known for months that local efforts were willing to receive some of the government funding, but she had not expected such a large sum.

The new funding brings approximately $10 million for the city and county to spend administering the program.

With all the money on hand, Young Griffin said her team is trying to figure out “ERA 2.0.”

They could hire more people to process applications to make the program faster and more efficient. After all, the federal government has been pushing for speed since the program was launched.

But Young Griffin thinks the better way is probably to hire social workers to help people bidding for the funds with the things that caused them to fall behind on rent in the first place.

“Eventually this money will be gone. Something that keeps me up at night… (is the) concern we have: How are we really creating stability for people?” Young Griffin told attendees at the recent West Tennessee Fair Housing Summit.

Though she knows she won’t have enough money to provide a case worker for each applicant, she thinks it would be a huge achievement if the program could bring together 100 applicants “in a very different place in five years.”

Slipping through the cracks

One morning last week, Judge Lynn Cobb processed nearly 100 cases in less than 45 minutes. Many of the cases had been settled before the hearing, and almost none of the tenants of the remaining cases had appeared.

In one instance, however, a short young woman with glittering eyelashes emerged from her seat in the far corner of the courtroom after hearing her name.

Cobb did not ask if she had applied for rent assistance or clarify that eviction was involved. He simply asked if she owed the rent, which her landlord’s attorney said.

She said she did. He upheld the verdict and told her to try to work out a payment plan with her housing manager.

As for the rent subsidy, the woman said she heard about the program but knew nothing about it.

With $80 million waiting to help people like her, a judge had just ordered her eviction for $5,000.

Jacob Steimer is a Corps member with Report for America, a national service program that places journalists in local newsrooms. Email him at [email protected]

This story is brought to you by MLK50: Justice Through Journalism, a nonprofit newsroom focused on poverty, power and politics in Memphis. Support independent journalism by making a tax-deductible donation today. MLK50 is also supported by these generous donors.

Have a story idea, tip, or feedback? Send an email to [email protected]

Carabiner Multi Instrument Can Be Used As a Survival Fireplace Starter!

The Greatest Street Working Sneakers of 2021