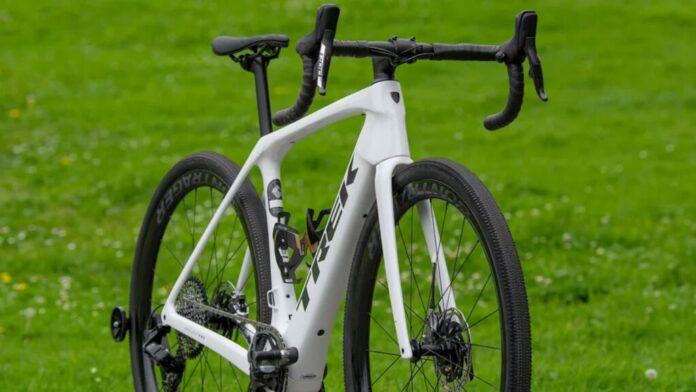 Trek is giving anyone in search of a high-end, mid-drive e-road bike another competitive option to consider with the new Domane+ SLR.

The Wisconsin-based brand had already made electric versions of the Domane, the Domane+ LT and HP, but those models were limited either in their top speed to 20 miles per hour, or were heavy and somewhat bulky.

The Domane+ SLR takes the form factor of the latest Trek Domane endurance bike and neatly integrates a mid-drive motor capable of class-3 assist speeds up to 28 miles per hour, in a package weighing under 30 pounds, effectively taking the best features of the brand’s previous two electric Domane models and packaging it into one.

The heart of any e-bike is its motor—because it powers the bike, but also because it has a high level of control over what the bike feels like. For the new Domane+ SLR, Trek has turned to the TQ harmonic pin ring e-system, a Class-3 (in the United States) mid-drive motor that helps bring the weight of the bike down while offering a ride feel more similar to a standard road bike thanks to a narrow 163 millimeter Q factor.

The TQ HPR50 model used in the Domane+ SLR provides up to 300 watts of power with 50Nm of torque.

To help with ride feel, TQ also worked to remove resistance from the bottom bracket found in many mid-drive e-bike systems.

All information about the bike can be found on a display Trek has integrated into the top tube that allows riders to toggle between data pages of current wattage output from both the rider and the bike, speed, distance, and remaining range.

Riders toggle between the three assist levels with buttons integrated at the hoods, somewhat like satellite sprint shifters in a Di2 or eTap system.

A 360 watt/hour battery in the downtube powers the motor, providing a claimed range of 60 miles in eco mode, the lightest assist level available. An optional 160 watt/hour range extender battery, which mounts externally where a water bottle would go, adds another 50 percent to that range, bringing it to a claimed 90 miles.

Trek allows you to customize the assist levels through the Trek Central app, giving you more control over the ride including maximum power, assist percentage, and quickness of the pedal response.

The app also has a ride planning feature to help you determine what’s possible with the bike’s battery range.

Using the TQ motor has helped Trek make the Madone+ SLR one of the sleekest e-road options available. This one passes the “at-a-glance” test: most people looking at it from a slight distance, or even up close, probably wouldn’t know this is an e-bike until looking closely and seeing the display screen on the top tube, and a slightly modified bottom bracket to house the motor.

Neither the motor nor the battery are so large that they make the bottom bracket or downtube bulbous. Trek has done an impressive job in this regard, as most mid-drive, Class-3 e-road bikes are pretty obviously e-bikes.

One thing missing, out of necessity, is the hidden downtube storage accessed beneath the water bottle cage. That space is occupied by a battery in this bike, but it still is a cool feature of the Domane we wish was on the e-version.

How one can Choose a Carabiner

13 Out of doors Locations Value Bundling Up For This Winter

Nomad | Carabiner for iPhone and Android