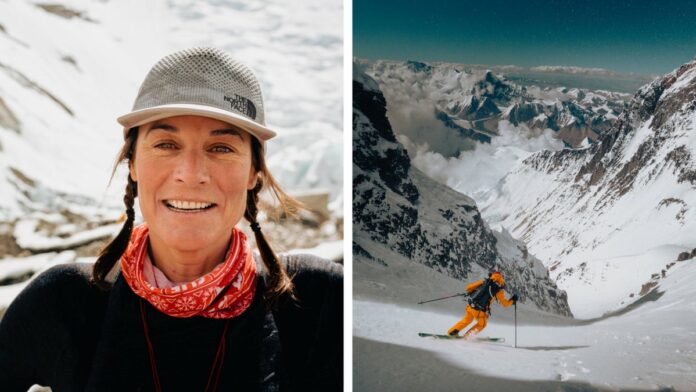 At 10:40 A.M. on Monday, September 26, renowned ski mountaineer Hilaree Nelson summited 26,781-foot Manaslu with her climbing—and life—partner Jim Morrison. They stepped into their skis and began their descent, and shortly after, Nelson was knocked off her feet by a small avalanche. She fell 5,000 feet down the south slope of the Nepalese mountain, according to an Instagram post from Morrison. After determining there was nothing he could do to help her, he descended, making it to base camp safely. After two days of searching in a helicopter, Morrison and a rescue crew located and retrieved her body, which was then flown to Kathmandu.

Nelson, 49, was a giant in her field: one of the most accomplished ski mountaineers in the world, a mother of two boys, a mentor to many, and an inspiration to more. The environments she thrived in, remote high alpine regions that she explored on foot and by ski, are inherently inhospitable to human life. Her discipline has claimed the lives of many of its most dedicated acolytes, but something about Nelson—her formidable physical strength, her calm, resonant demeanor, and the many years that she has safely traveled through treacherous terrain—seemed to give her an air of invincibility.

“I and every mountain person alive today [feel] the roar of a big spirit passing,” wrote climber Will Gadd in a tribute.

Nelson grew up in Seattle and learned to ski in the Cascades, but her career as a skier took off when she moved to Chamonix, France, after graduating from Colorado College in the 1990s. There, she developed her technical climbing skills and began pursuing bigger and more complicated objectives on her skis. In 1996, she won the European extreme ski competition in Chamonix. By 1999, she had landed a sponsorship with The North Face, which offered her the opportunity to go on expeditions to the world’s biggest and most remote mountains.

To excel in expedition-style climbing and skiing, an athlete needs to be meticulous, organized, and committed, with ample ambition balanced with enough humility to stay alive. “Hillaree was stubborn as hell,” says climber Emily Harrington. “She fought so hard for everything and she desperately wanted to be strong and be successful. She was so passionate.”

Harrington and Nelson met through their mutual sponsor, The North Face, and formed a close bond when they were the only women on a three-month Everest expedition in 2012. On that trip, Nelson summited Everest and Lhotse in a 24-hour window, making her the first woman to climb two 8,000-meter peaks in a day. The feat earned her international recognition.

“Her accomplishments made her a larger-than-life character, but she never bought into the hype,” wrote climber Mark Synnot in a tribute. “She wore the mantle of being one of the world’s preeminent ski mountaineers (male or female) with a grace and genuine humility.”

In 2015, she completed the first female descent of Makalu La Couloir on 27,766-foot Makalu. In 2017, she completed an impressive double-summit on Denali, climbing Cassin Ridge and skiing the Messner Couloir, and in the same year she notched a first descent on 21,298-foot Papsura Peak in the Indian Himalaya, alongside Morrison and photographer Chris Figenshau. The next year, she and Morrison made the first ski descent of Lhotse, leading National Geographic to name her one of their Adventurers of the Year. That year she was named captain of The North Face global athlete team, a role held by climber Conrad Anker for three decades. Dozens of other expeditions—to uncharted peaks in Myanmar, to Baffin Island, to the Andes—filled her calendar in-between those highlights.

“I don’t think she could really handle normal life without having that other side, being on the edge. And you could tell that she just loved it,” says Harrington. “That’s where she was at peace: when we were out on an expedition doing something really complicated and dangerous that required a lot of mountain experience. That was where she thrived.”

For her athleticism, skill, and drive alone, Nelson would have been a leader in her sport. But what set her apart was how she showed up in her relationships, as both superhero and relatable friend. She was also an activist, campaigning for strong environmental policy with the nonprofit Protect Our Winters and serving on the board of the American Alpine Club.

“She was a force, strong and powerful, but she also was not afraid to be vulnerable, express her fears, and be honest. There was this tenderness and rawness about her that she was willing to share with us, especially younger women.” says Harrington. Professional skier Ingrid Backstrom echoed that sentiment in an Instagram post: “She showed me that you don’t need to be only tough and badass to succeed in the mountains, you can be kind and nurturing, hard as nails and still soft and caring.”

Mountaineers with children are frequently met with disapproval for taking on risk with families at home, and, predictably, women face greater vitriol than men. Nelson was not insulated from criticism for undertaking serious expeditions while raising her now-teenage sons, Graydon and Quinn—Harrington remembers one article that came out during their 2012 Everest expedition that questioned Nelson’s choices as a mother and left her in tears.

Still, Nelson was “unapologetic about the life she chose,” Harrington says. “She knew that she was taking a different path than most women. She chose to become a mother at a time when you had to choose between your athletic career and being a mother, and she refused to choose.”

Nelson was open about her own struggles with the balance—how hard it was to leave her kids, and the way their presence influenced how she moved through the mountains. But the high alpine was where she came alive, and instead of compromising in either arena—the mountains or at home—she passionately pursued what she wanted in both.

“There are no words to describe the love for this woman, my life partner, my lover, my best friend, and my mountain partner,” wrote Morrison in an Instagram tribute. “My loss is indescribable and I am focused on her children and their steps forward. [Hilaree] was the most inspiring person in life and now her energy will guide our collective souls. Peace be with us all. Pray for her family and community which is broadly stretched across our planet. I’m devastated by the loss of her.”

Stunning Hike Turns Creepy! That is the gear I carry to...

The Greatest Nationwide-Park Badges, Maps, and Souvenirs You Can Solely Get...