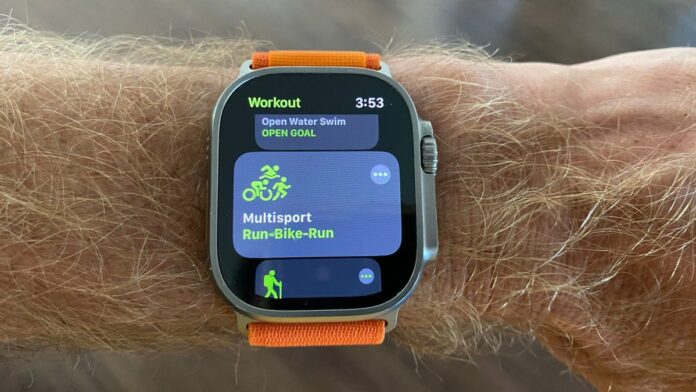 We’ve reviewed Apple watches before, and, in the past, have always told endurance athletes, “It’s a nice watch, but it’s not really for what you do.” That’s especially true for those, like triathletes, who train every day, usually twice per day, and have a particular affinity for data, accuracy, and workout organization. Apple watches have great apps, beautiful screens, and the best touchscreens in the game, but their built-in workout profiles and post-data analysis have left something to be desired. And the battery life—oh the battery life!

But now, with the release of their “adventure-focused” Apple Watch Ultra, Apple has—for better or for worse—thrown its hat in the endurance sport’s ring with the big boys. I wore the watch for a week of workouts—running, cycling, and swimming once or twice a day—plus during a mini-triathlon to see how it holds up to real-world endurance use. Here’s what’s new, what I liked as I spent hours using it, what I didn’t like, and my conclusions.

Before I get into the specifics that make the Apple Watch Ultra an endurance/outdoor contender, let’s quickly take a look at what’s new:

As noted before, the Apple Watch series was always a bit frustrating for athletes—the super limiting battery life meant you had to charge it pretty much every night, and you couldn’t go on super long rides, or adventures, or race long-course tri or ultraruns with it. Even if you loved everything else about the Apple Watch, that was always a deal breaker. The good news is that with the increased battery life and low-power options, you’re looking at a smartwatch that can effectively handle nearly any workout, event, or outdoor adventure that you could throw at it. Apple also teased a low-power workout mode that would give additional battery life, but with reduced resolution of GPS and heart-rate readings coming soon.

Battery life aside, the more robust build of the Apple Watch Ultra makes it feel less like a piece of fine art and more like a tool for training. And it’s not just looks—the raised lip of the case protects the precious screen better than previous models by a ton. It’s also safe to say that the “Precision Start” function and “Action” buttons are both things that pretty much every other smartwatch ever made already has, but both were gaps missing in Apple’s exhaustive function quiver.

With all of this combined, the Apple Watch Ultra is a solid watch for anyone training for a triathlon or a marathon or really any other endurance sports activity—regardless of distance. Outside of training, Apple’s “lifestyle functions”—things like text messaging, weather, music, third-party apps, contactless payment, and (way, way) more—are basically unparalleled. Yes, Fitbit has some fun stuff and a nice screen, but Apple is still lightyears ahead of any competitor when it comes to smartwatch power and integrations. As an example: The three-mic setup is nothing short of magic when making calls on the watch—no one is even remotely trying to do this stuff, except for Apple. It’s also a decent (yes, just decent, more on that below) outdoor adventure watch.

Also, let’s not forget that since the untimely demise of the Forerunner 945 LTE, this is one of the only full-function workout watches with legit battery and LTE connectivity. So if you like to go training (or racing!) untethered to your phone, like so many of us do, this is still one of the only ways to stay in touch via LTE. That’s not nothing.

Apple Watch Ultra: What Could Be Better

Many of the “outdoor” functions like navigation and mapping are still on-grid. If the Apple Watch Ultra is supposed to speak to the hardcore adventure set, the lack of offline mapping and navigation seems like nothing more than an oversight (or lack of a mapping partner, maybe), and the compass waypoints and retroactive backtracking—while cool—aren’t exactly going to save your life in the backcountry. The battery is better, for sure, but to consider this a multi-day hiking and backpacking watch over something more expedition-worthy is reckless at best. If you’re with a group of friends backpacking for a week, it’s probably not a bad choice, but if you’re doing a solo multi-day adventure or tackling an unsupported fastest known time (FKT), I wouldn’t count on the Ultra as your only navigational tool, like you could for other upper-end adventure watches like the Coros Vertix 2 or the Garmin Fenix 7/Enduro line.

In terms of more workout-specific capabilities, the battery life (finally) brings the Apple Watch into the realm of long endurance athletes like triathletes and ultra runners, but it still lacks some of the data power that both groups might really need. Triathletes should be encouraged that this is a watch they can finally do a full Ironman with (and all of the related Ironman training), but many serious long-course triathletes might be frustrated by the lack of native cycling power connectivity. The multisport crew might also complain about a lack of open-water swimming distance alerts that pretty much all open-water ready smartwatches have right now. And while native running with power is a total game changer for the ultra/trail running set, given that currently only Polar and Coros have that built-in, serious runners might take issue with how inflexible the power metrics are in the workout screens. Yes, having average power and average three-second power is great (and the ability to move those metrics around), but lap power is sometimes just as important, if not more.

Finally, there’s the Gucci-patterned elephant in the room: The price. Sometimes it feels like Apple gets a bit of a pass on pricepoint because it has so many great lifestyle integrations and really cutting-edge hardware, but because Apple wants to play with the long-distance training/adventure crowd now, they need to stand and be compared to other smartwatches in that world (see our competitive comparison below). Eight-hundred dollars gets you a lot of smartwatch in the endurance/adventure realm—for instance, the Garmin Fenix 7 or Forerunner 955 series or the Coros Vertix 2. All of those watches have some very very robust training modes, loads of customizable sport functions, navigation, and insane battery life. No, none have a beautiful screen, smartphone integrations, or LTE like the Apple Watch Ultra, but in terms of working out/navigating the outdoors, they’re still on another level.

The best part of the Apple Watch Ultra? That triathletes, especially long-course triathletes, finally have a valid choice in the Apple lineup. Assuming you’re not interested in cycling power connectivity (most triathletes probably use a cycling computer for that), and the fact that there are no open-water distance alerts (bummer), this new watch not only goes the distance in battery life, but it has something special, just for us: Automatic triathlon transitions.

Yes, Wahoo already scooped Apple with their own automatic transition function that can tell you’re going from swim to transition to bike to transition to run—and mark each one—but Apple’s new Ultra Watch actually does it better. In our tests against the Wahoo Rival, the Ultra outperformed the Rival in accuracy between transitions every time. (Note: The Ultra also does manual transitions with the action button, as well.) Though you can’t go back and edit your transitions like you can in the Wahoo app and “fix” any mistakes in marking transitions, the Ultra did a fantastic job of knowing when I went from sport to sport to sport.

The addition of a “room” with various multisport configurations—things like run-bike-run, swim-run-swim, etc.—is also a great addition to the Apple Watch OS ecosystem, as you can finally do bricks or nonstandard multisport events, with just a little bit of preplanning.

On the note of workouts, the Apple Watch Ultra does have some cool built-in workouts that you can select when you’re feeling uninspired by your training program, and of course you can create and edit your own workouts on watch—without the need for an app. Apple also says there will be a “track detection” feature coming soon that will actually recognize—via Apple Maps data—that you’re in proximity to a track (U.S. only), and prompt you if you’re going to be running on it. If so, you’ll choose a lane, and it’ll snap the GPS tracking and distances to that track. While other brands like Garmin and Coros have something similar, no one can automatically detect that you’re near a track. For better or for worse, it’s a reminder that the Apple Watch Ultra is paying (very close) attention to you.

In the past, Apple watches have been a great lifestyle smartwatch that integrates incredibly with the Apple ecosystem. They play music send and receive texts, check emails—basically most things a smartphone can do now. They also let you go for casual workouts and track your “fitness” (lowercase) as you went. The Ultra still has all of that. Now, with the Ultra, Apple wants to be considered an endurance sports/adventure outdoors player up against the watches we used to buy to supplement our Apple Watch purchases—from brands like Coros and Garmin and Polar.

Now, instead of having your Apple Watch for going to the office or going out at night, and your “workout watch” for serious swims, rides, runs, hiking, and backpacking, Apple wants to be all of these things: Leave your Garmin at home, let it die. Does Apple fully pull this off? Not quite, but they’re dangerously close. For $800, you’re still not playing in the same sandbox as an $800 Garmin or Coros watch, but if this watch was $500 (with LTE), those brands would be sweating big time. Even so, the issues we have with the Apple Watch Ultra aren’t core issues—I can’t imagine it’d be a tough lift to get offline mapping, especially given that the storage is already there (32 gigabytes). It also doesn’t seem incomprehensible that Apple could somehow get cycling power in the workout app via Bluetooth or add an average lap running power data field.

Apple has proven that they do understand the multisport athlete with the Ultra. They nailed something really complex (the auto transition mode), corrected something basic (“precision timing”), and spent real money and time on something tough (the battery) that signals that endurance athletes are important to them. Having the exhaustive multisport “room” goes a long way as well.

Is this the watch that replaces all of your watches? It very well could be.

For a competitive comparison with the Garmin Fenix 7, Coros Vertix 2, Suunto 9 Peak, Garmin Forerunner 955 Solar and Wahoo Rival, see the bottom of the review on Triathlete.

All photos taken by the author

Tying a Bull Hitch Know to a Carabiner utilizing Paracord

fall is an ideal time to go tenting