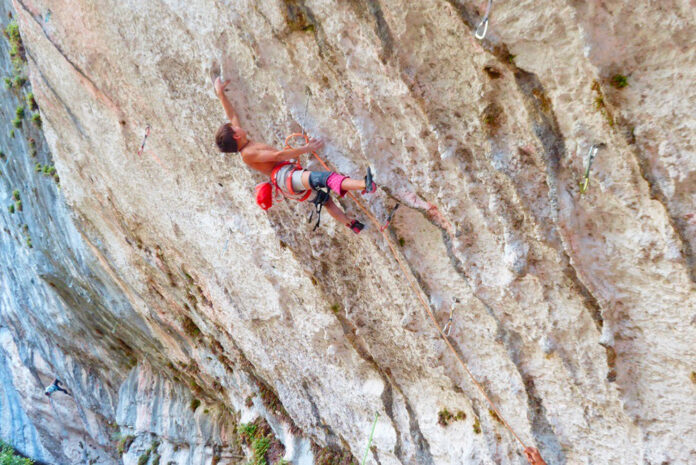 French climber Théo Blass has climbed his first 9a, TTT at the Gorges du Loup in France aged a mere 12 years and 9 months.

Théo Blass from France has generated headline news for his repeat of Trip Tik Tonik, the classic 9a located at the Déversé sector of the Gorges du Loup, aged a mere 12 years and 9 months.

Blass started climbing aged 7 and made a name for himself just two years later when he climbed his first 8b. His progression since then has been awesome: in 2020 he became the youngest climber in the world to send 8c aged 10, he redpointed his first 8c+ just a couple of months after turning 12 and now, at a mere 12 years and 9 months, he has sent his first 9a.

Success on the steep and powerful TTT didn’t come easy. In an interview on Fanatic Climbing his father Vladimir Arnaoudov explains that Théo, 1.46m tall, first attempted the route last summer and managed to do all the moves except for one, a long reach at the 3rd quickdraw. He liked the route so much though that he returned this summer and, realising he had grown enough in the meantime, started working the sequences. A fortnight later he “got ridiculously close to sending this magnificent and powerful line” after falling off the easy top section 4 times due to silly mistakes and foot slips. A further trip was necessary for the redpoint.

As sport climbing has progressed throughout the last decade, the age of climbing performances has dropped rapidly. While it is obviously impossible to objectively measure Blass’ accomplishment with those of his peers, it is nevertheless interesting to put it into perspective and compare it with an unequivocal reference point, namely Adam Ondra. As a child prodigy the Czech sent his first 9a aged 13, Martin Krpan at Misja Pec in Slovenia, and his first 9a+ aged 15, La Rambla at Siurana in Spain.

During the last 15 years Ondra has set new standards and taken climbing into a completely different dimension, while maintaining unaltered his drive and above all the fun he derives from this game of climbing. It would be nice to think the same for Blass.

It is Time to Plan a Mountain Biking Journey to Carrabassett...

Three native entities get funding from state Outside Recreation Division |...

A Look Again at Mountaineering the Appalachian Path Alone as a...

Dwelling costs anticipated to proceed climbing in Kalamazoo in 2022

10 Adventures Between the Black Hills and Yellowstone