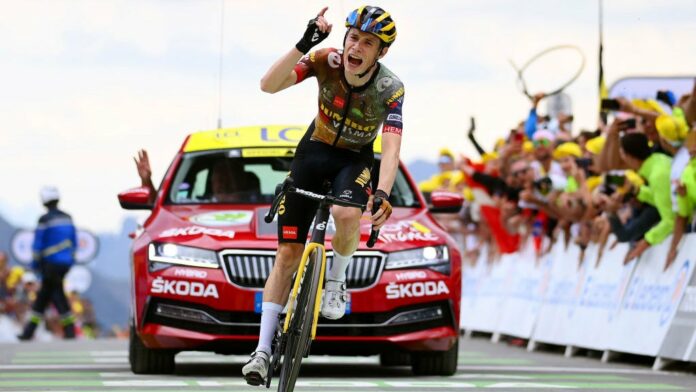 This story originally ran on VeloNews.com.

Jonas Vingegaard pulled off a stunning stage win at the Tour de France on Wednesday after dropping race leader Tadej Pogačar on the slopes of the Col du Granon ascent. In doing so, the Danish leader seized the yellow race leader’s jersey from Pogačar, who finished almost three minutes in arrears.

Pogačar trailed in a staggering 2 minutes, 52 seconds behind in seventh position. He slumped over his handlebars, exhausted, after crossing the line. With time bonuses factored in, Pogačar slipped to third overall 2:22 back, with Bardet now six seconds ahead of him in the general classification.

Vingegaard is now the first rider to have dropped Pogačar in a grand tour since the Slovenian wunderkind began racking up victories three years ago. Pogačar is the two-time Tour de France champion, and prior to Wednesday, had never been put under serious pressure at the world’s biggest bike race.

“I think it is really incredible. It is hard for me to put words on it,” Vingegaard said at the finish. “This is what I dreamt of always, a stage in the Tour and now the yellow jersey … incredible.”

His Jumbo-Visma team was aggressive early on, putting Wout van Aert up the road in the opening miles of the race, and then attacking Pogačar repeatedly during the stage. Vingegaard and co-leader Primož Roglič launched several one-two surges at the base of the Col du Telegraphe, forcing the Slovenian to chase both, and while Roglic subsequently cracked, Vingegaard ended the day with the benefits of that strategy.

“We made a plan from the start of the day. I guess obviously you could see what the plan was,” he explained. “We wanted to make a super-hard race. We thought it was in my favor and in the favor of Primož.

“I took a lot of time today, but I never would have done that without my teammates. I really have to thank all of them. They were all incredibly strong today and I would never have done this without them.”

The decisive move came three miles from the finish line. Vingegaard admitted that his move was more in hope than expectation, a surge borne out of a determination to try rather than any perceived signs that Pogačar was about to crack.

“On the Galibier, over the top, he was really strong and he dropped everybody else. I was a bit insecure if he was going full or not,” he said. “Then on the last climb I was thinking if I don’t try I am not going to win.

“Of course a second place is a nice result in the GC, but I tried this last year. Now at least I want to try to go for the victory. And that’s what I did today. Luckily it succeeded today and now I have the yellow jersey.

“I will just keep on fighting for yellow to Paris.”

Heading into the high mountains

Stage 11 of the Tour de France was the first really big mountain stage of the race, a daunting 94-mile epic taking the riders from the town of Albertville to the summit finish of the Col du Granon and scaling two beyond-category ascents along the way.

After an early intermediate sprint, the riders faced the second category Lacets de Montvernier, the first category Col du Télégraphe, the hors categorie Col du Galibier which, at 8,660 feet above sea level is the highest point of this year’s Tour, and then the final climb.

The Col du Granon was used only once before as a stage finish in the Tour, back in 1986 when Bernard Hinault had his last-ever day in the yellow jersey.

With that portent in mind, it was a day which promised a general classification shakeup. That is exactly how it would turn out.

Green jersey Wout van Aert (Jumbo-Visma) and longtime rival Mathieu Van der Poel (Alpecin-Decuninck) were the first aggressors, clipping away immediately after the drop of the flag and holding a lead of 42 seconds by the intermediate sprint.

Van Aert took first there to boost his lead in the green jersey contest, while behind six chasers mopped up the points from third through to eighth, putting Van Aert’s closest rival Fabio Jakobsen further on the back foot. He was only tenth there, taking a mere six points to Van Aert’s 20.

Those chasers were reeled in soon afterwards but Mattia Cattaneo (Quick-Step Alpha Vinyl) was able to bridge to Van Aert and Van der Poel at mile 18, with 17 others joining two miles later.

Barguil was best-placed of those in the general classification but was little threat to Pogačar’s yellow jersey, having started the day 26th overall, 13 minutes and 33 seconds back. Yet he had another goal in mind.

Starting the foothills of the Lacets de Montvernier after 27 miles kiloeters of racing, the leaders were 3:10 ahead of the bunch. Van der Poel was dropped soon after the start of the climb and would retire from the race an hour later.

Latour led Geschke, Barguil and Van Aert across the top, a result that saw Geschke extend his lead in the King of the Mountains classification. The group was 7:20 ahead of the peloton with 48 miles remaining.

Bodnar and others were dropped on the Col du Télégraphe as Barguil began the process of thinning things down. He reduced the group to 11 riders while helping to boost their lead over the peloton to nine minutes with two miles to the summit.

He rolled over the top second there behind Latour and just ahead of Geschke and Chérel.

Behind, Roglic showed the aggressive intentions of the Jumbo-Visma team by attacking hard. He drove the pace down the descent of the Télégraphe and this created a selection, with Pogačar, Vingegaard, Pierre Laporte and Geraint Thomas (Ineos Grenadiers) going clear with him.

Jumbo-Visma continued firing on the Galiber, with Vinegaard and Roglic taking it in turns to attack the race leader. Pogačar covered each move and put in some digs of his own, with a temporary stalemate then breaking out.

Up front, Chérel played his hand 40 miles from the finish but didn’t get far. Van Aert, Geschke, Barguil and Latour then pushed ahead and were joined by Teuns, with Barguil then making his big move three miles from the top.

More attacks on the race leader

The general classification contenders had regrouped behind but Roglic threw down the gauntlet again and made another probing surge, which was counted by Pogačar. Vingegaard marked him and further attacks followed before Roglic was dropped.

Bardet and Thomas also went south, with Pogačar and Vingegaard continuing together before yet another regrouping.

Barguil didn’t have to worry about any stop/start racing and continued a high tempo out front, netting the Souvenir Henri Desgrange prize by crossing the Col du Galibier first. He was 50 seconds clear of closest-chaser Geschke, with Latour at 1:25 and Van Aert close by but deciding to wait for his teammates.

Roglic had been dropped and was in a group with David Gaudu and other Groupama-FDJ riders, but Van Aert went back to those and helped them to return.

The yellow jersey group was 5:15 behind Barguil at that point but reduced its deficit on the final climb to 3:35 with six miles remaining.

The day’s big drama was about to play out.

Quintana was feeling good and kicked clear from the yellow jersey group on the concluding climb of the Col du Granon. He caught and passed Geschke, and was 1 minute 52 seconds behind teammate Barguil with just under four miles to the top.

Rafal Majka (UAE Team Emirates) had been in trouble on the Galibier, but had rallied and was leading the Pogačar group with three miles left.

Bardet then kicked things off with a big attack. Vingegaard surged several minutes later, with Majka trying to lead Pogačar up to him but easing back when he realized his team leader was being dropped. Barguil was caught and left by Quintana with two miles remaining; Vingegaard then caught and dropped Bardet, and opened an ever-increasing gap over Pogačar and Thomas.

The yellow jersey had completely exploded and was soon on his own, following a lonely, losing path to the summit. Vingegaard was on a charge and sped past Quintana with two miles left, becoming the leading rider on the road. He had also just become the virtual yellow jersey, with Pogačar 40 seconds back at that point and slipping to 1:29 in arrears a few miles later.

The young Slovenian continued to fade from there, being passed by Gaudu and Yates, and eventually crossed the line a distant seventh, 2:51 behind the new race leader.

It was a huge blow and while the Tour isn’t over, it’s been shaken up in a way very few expected.

The Superior Information to Colorado

Some Buyers Could Be Apprehensive About Tenting World Holdings’ (NYSE:CWH) Returns...