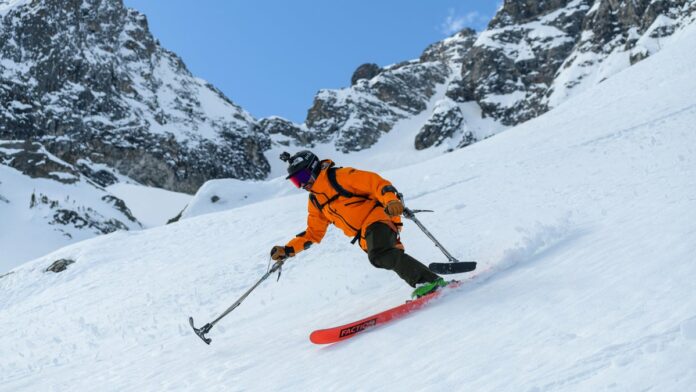 Vasu Sojitra and Patrick Halgren are professional skiers. They are also sole mates. Sojitra lost his right leg to a blood infection at nine months old, and Halgren lost his left leg at age 23 in a motorcycle accident. In 2013, the two met in Breckenridge, Colorado, and realized their feet were the same size; they’ve been sole mates ever since.

Professional comedian Josh Sundquist first used the term “sole mate” when he found a fellow amputee, Stephen, who wore the same shoe size and was missing the opposite leg. In 2011, Sundquist made a YouTube video about their meetup and decision to begin exchanging shoes. A number of organizations exist for amputees to trade single shoes, but finding a sole mate is a much rarer occurrence, especially for two distinguished skiers.

Since 2013, Sojitra and Halgren have shared 18 pairs of various kicks, including boots, sandals, cleats, and clipless shoes for cycling. As Sundquist says in his viral video, “What are the chances that someone would be missing the other leg, wear the same shoe size, and most importantly, like the same kinds of shoes that I do?”

Despite different career paths, goals, and passions, skiing ultimately brought the two together. Sojitra lost his leg earlier than he can remember, and while growing up in Connecticut and India, his brother was instrumental in pushing him to take up skiing and skateboarding, which ultimately led to several firsts in the adaptive-athlete community: Sojitra became the first adaptive athlete to complete the Rut, a 17-mile trail race in Montana with 7,800 feet of elevation gain; ascend the Grand Teton, in Wyoming; summit and descend Denali, in Alaska, on skis; and land the first 720—all without the use of a prosthetic. In October, the North Face, which sponsors Sojitra, released Ascend, a film that explains what it’s like to be a minority in the mountains and aims to reshape the conversation about disability in the outdoors.

Sojitra now lives in Bozeman, Montana, and uses his platform to highlight what adaptive athletes can do. Through ski films, diversity panels, and cross-brand partnerships, he’s determined to further the conversation of including marginalized and adaptive athletes in the industry. Recently, he joined pro snowboarder Jeremy Jones and Teton Gravity Research to be part of the first adaptive descent of Skillet Glacier on Wyoming’s Mount Moran. And he continues to focus on big-mountain skiing and pushing the boundaries of adaptive athletes.

Halgren took a more indirect approach to professional skiing. From before he could walk until he was a teenager in Tolland, Connecticut, he was an avid skier. But the sport soon became too expensive for his family, and in his twenties, he found his attention had wandered in other directions.

On June 15, 2013, Halgren woke up early to make it to his job as a sports-radio commentator, but his motorcycle wouldn’t start. It took a downhill push to give the bike enough momentum to pop into second gear, when he jumped on. Already late for work, Halgren took off and sped faster and faster, veering dangerously close to the edge of the road as he rounded each turn. Then he felt his control of the bike slipping away. In a split-second decision, he veered off into a farmer’s field. The front wheel of the bike hit a rock, and Halgren slammed into a telephone pole. A month later, he woke up in a hospital bed with most of his left leg missing. The path to recovery was a long one, but an opportunity to ski again soon presented itself.

Halgren and Sojitra met in Breckenridge, Colorado, that same year at the Hartford Ski Spectacular. The event was created to encourage adaptive skiers ages 24 and under to come out for an all-inclusive, weeklong racing clinic. “What a pleasure it was to meet [Sojitra],” says Halgren. “I had been watching his ski edits and videos for a long time at that point and was a little starstruck. It was a very surreal moment.”

Their relationship took off. They realized they wore the same shoe size, began corresponding, and even sent footwear back and forth, just like Sundquist and his friend Stephen.

Halgren, who is now settled in Colorado, frequently travels to Europe for multiple races on the World Para Alpine Skiing circuit. He’s gunning to stand atop the podium at the Beijing Paralympics in March. For years, Halgren worked at ski resorts in New Zealand and Vermont to get in two winters each year and to spend as much time skiing as possible.

The pair share a love of skiing, the outdoors, and shoes. But they also find prosthetics foreign and uncomfortable and opt for crutches. One shoe is all that’s required.

Although they initially met over a ski boot, Halgren finds Sojitra’s boots too small for his preference. However, they have since shared just about every other type of footwear. Even while Halgren is chasing medals and Sojitra is chasing first descents, the two premier adaptive athletes will always be linked as sole mates.

Inside Out | An ideal day spent having fun with The...

Do FKTs Miss the Level?

How Alex Honnold Climbed El Capitan With No Rope

All the pieces You Have to Know Concerning the America the...