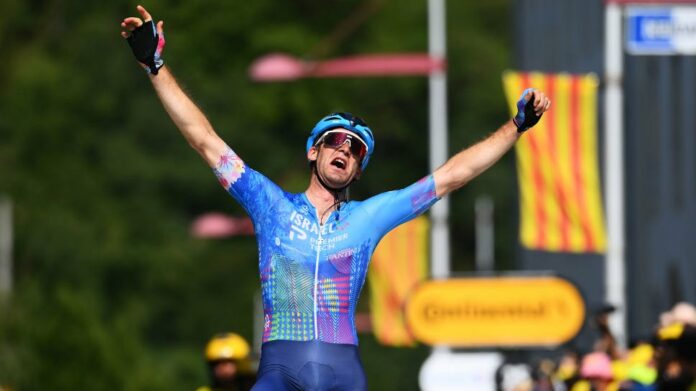 Hugo Houle delivered big for Canada and for his family on stage 16 of the Tour de France on Tuesday.

Houle, 31 claimed Canada its first Tour stage win since 1988, when Steve Bauer won the opening road stage of the race.

The victory on Tuesday also marked a career milestone for Houle, who rides for the Israel Premier Tech squad.

“I never won a race, so I guess it’s the right place to win my first race,” Houle said shortly after the finish.

The team branched from its Israeli roots earlier this year when Canadian company Premier Tech joined the team as co-sponsor. The move added Canadian riders and staff to the squad, among them Bauer himself, who joined as a sport director. Houle was another new face on the team, having joined from Astana in the offseason.

“It’s quite crazy. We have more and more Canadians on the WorldTour thanks to our team and Premier Tech and Premier Tech development team. We’re working to have the next generation,” Houle said.

“I think what I achieved today can be an inspiration of what is possible.”

Hoods scored the dramatic victory after attacking into the early breakaway during the 110-mile stage from Carcassonne to Foix. He was joined by his teammate and compatriot Michael Woods, who looked to be the team’s ace for the mountainous stage. The route finished with two brutal ascents: the Port de Lers and Mur de Péguère at the foot of the Pyrenees.

“The plan was to have me and Woods in the breakaway if we could,” Houle said. “In theory, Michael should be the guy who is the strongest in that climb.”

Houle appeared to be the decoy rider for Woods, whose strength on climbs made him a danger man in the breakaway. So, on the final climb, Houle bolted off the front in an attempt to force other riders to chase. When those other riders allowed Houle to ride away, victory became a reality for the Canadian.

“At the end, we played the strategy I had in going ahead just to take off some pressure on Mike so he can sit on and follow,” Houle said. “In the end it turned out I stayed away, so Mike was just surfing behind.”

Houle crested the final climb with a 25-second advantage on four chasers: American Matteo Jorgenson, Vanlentin Madouas of France, Michael Storer of Australia, and Woods. After Jorgenson crashed on the descent, the gap only grew on the downhill. Houle crossed the line in downtown Foix with his hands in the air, and a look of extreme emotion on his face.

“This Is For My Brother”

It was perhaps fitting Houle had the winning legs—the win and saw him come good on his vow to win a Tour stage for his brother, Pierre, who was killed by a drunk driver in 2012. Last year, reporter Sadhbh O’Shea of VeloNews spoke to Houle at length about his family tragedy, and how the loss of Pierre had fueled his ambitions in pro cycling.

In that interview, Houle spoke of the Tour’s connection to his family and to Pierre. As boys growing up in rural Quebec, they watched the race on television every summer.

“So, in July we watched the Tour de France and we had that entire morning looking at the race and he never had the chance to come to Europe,” Houle said. “And to me, that is quite bad that he could not see this and everything.”

Houle told VeloNews in 2021 that his lifelong dream would be to win a Tour de France stage and dedicate it to Pierre. He did just that after crossing the line on Tuesday.

“This is for my brother, who died when I turned professional,” Houle told reporters, choking back tears. “I worked ten to 12 years to get the win for him. I do not know what to say. I am so happy.”

Houle crossed the line with his finger pointed direct to the sky in a striking visual scene.

“Of course when things like this happen in life, it takes a few months to move on, move forward,” he said. “That was my motivation, to win for my little brother. Today I did it. I never won anything in my life as a professional and today I won in the Tour in a crazy way.”

Stage victory for Houle and Simon Clarke, and third place finishes for Houle, Woods, and Chris Froome gives the team a WorldTour points prize pot that will prove crucial as it fights for survival in the 2022 relegation season.

“It’s not every day you can have the chance to win. When it comes you have to go all in. That’s what I did,” Houle said Tuesday afternoon.

Oliver Parks and Recreation so as to add 4 new pickleball...