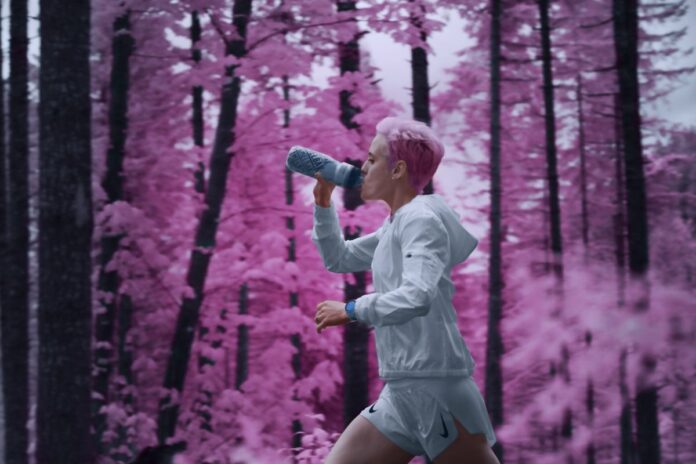 Yes, there are the good days—days when being a pro runner feels like pure glory. There’s the fog of your breath on a cold morning and the drumbeat of your footsteps. There’s the taste of salt and the thirst for speed. There’s the burn of lactic acid and the roar of the crowd. There are days when you’re laser-focused on running fast, and nothing else in the world seems to matter. But running fast has never been DeBues-Stafford’s only mission.

If you’ve already heard of DeBues-Stafford, a professional middle- and long-distance runner, it might be from her 2021 Olympic showing: she was the only athlete on the track sporting a rainbow-dyed pixie cut. It was a sly way of circumventing the Olympic ban on symbols of personal or political protest—and to show off who she really is.

“I’d dyed my hair rainbow for Pride, and I decided to keep it that way for the Olympics because I thought it was cool, and because there was a piece of me that wanted to be that representation and to be queer visibly,” she explains. If she was going to put in a good performance and leave it all on the track, she was damn well going to put her full self out there.

Ever since DeBues-Stafford came out as bisexual in 2017—about a year after her first Olympics—that’s the approach she’s taken. She’s dedicated herself to being a role model for queer athletes. That’s something she never had, she says.

The issue, DeBues-Stafford explains, is that many queer athletes are “straight-passing,” especially viewed at a distance and dressed up in regulation uniforms. That can lead young queer observers to believe that there aren’t queer athletes in sport, or that sport isn’t a safe place for people who identify as LGBTQIA+.

DeBues-Stafford felt the same way when she was young: caught between trying to fit into the mold of a sport she loved and being true to herself.

“For a long time in my life, I was really struggling,” she says. “I felt like I had to either be gay or straight. I felt so much pressure to choose.”

Of course, the reality is that she’s neither. She is bisexual. That’s something she’s learned to embrace thanks to the help of her aunt, who’s a gay woman, and other loving friends, family, and teammates. Since then, she’s only grown stronger—both as a confident queer woman and as an athlete. She started partnering with brands that aligned with her mission to diversify the outdoors. CamelBak is one prominent example.

“I love the community-based organizations that [CamelBak] has partnered with, such as Unlikely Hikers, Melanin Base Camp, and Diversify Outdoors,” she explains. “Those organizations all strive to make the outdoors a safer, more diverse, and more inclusive space for everyone.”

Her race results also seemed to benefit from her newfound alignment between identity and career. In 2019, DeBues-Stafford became the first Canadian woman to break four minutes in the 1,500-meter run. That same year, she set a new Canadian record for the distance.

Before long, it was time for Tokyo.

There, toeing the line at her second Olympics, DeBues-Stafford felt a sense of calm wash over her. She was quiet in her mind, more focused and confident than she’d ever been. (Sometimes that, too, is what being a pro runner feels like.) She took a deep breath in the silence as the runners around her shifted, tensed. Then, with a sharp pop, the starting gun went off, and she launched into flight.

That first day, DeBues-Stafford put down a blisteringly fast heat for the 1,500 meters, just a few seconds over the coveted four-minute mark. Over the next two races, she broke four minutes—twice.

Ultimately, she came in fifth in the 1,500 in the Tokyo Olympics. To an onlooker, it might seem that everything had come together and that DeBues-Stafford was totally crushing. Of course, in a lot of ways she was. But that’s not how it felt on the ground.

“I didn’t come here for fifth,” she said after the event. She was swept with conflicting emotions. On the one hand, she felt an overwhelming gratitude. After all, she was able to stay present and leave it all on the track. At just under three seconds slower than her personal best, she ran a race she was proud of. But on the other hand, she’d come to do so much more. She felt gutted to have come so close to the podium only to fall short. She’d arrived in Tokyo with a thirst to do more. She wanted to see how far she could push herself. Deep down, she knew she’d had it in her to win.

Since then, there have been other lows. In June, she learned she had an overuse injury, a stress reaction in her sacrum that’s forced her to take a break from hard training. A few weeks later, a beloved grandmother passed away. That’s on top of other stressors from the past few years: race cancellations and postponements due to COVID-19, chronic health issues, and internet trolls trying to cut DeBues-Stafford down when they disagree with her about sexism, equity, inclusion, and other matters. All those things can really wear on you if you let them, she says.

Sometimes they do. Sometimes being a professional athlete feels like forcing yourself to go on—digging deep, even with losses fresh on your record. But at the end of the day, DeBues-Stafford says, it’s all part of the job. And without a doubt, it’s all completely worth it.

“I don’t just want to run fast,” DeBues-Stafford says. “I want to leave the sport better than I found it.”

Gabriela’s Favorite Gear for Performing Her Best on the Go
Between international competitions, advocacy events, and training camps, Gabriela DeBues Stafford is constantly on the go. Here’s what she uses to maintain a solid hydration routine throughout.

Founded in 1989, CamelBak invented hands-free hydration and is the global leader in personal hydration gear. CamelBak is fulfilling its mission to continually reinvent and forever change the way people stay hydrated and perform by offering a combination of award-winning products that include everything from technical hydration packs to reusable bottles.

A information to spring tenting

Be on the alert for noticed lanternfly | Outside

25% Off On Tenting Necessities – SheKnows