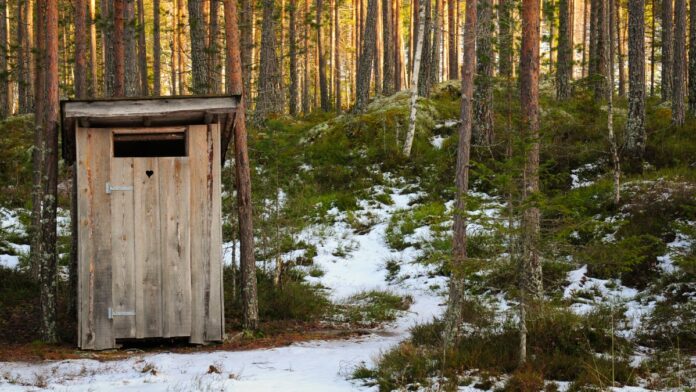 Brian Garner started a new job the very day I first emailed him. Garner, a 19-year-old thru-hiker, was training to spend his first season cooking and cleaning in the iconic alpine huts of New Hampshire’s White Mountains, so he didn’t yet understand his schedule. That afternoon, when he asked his boss for some free time to do an interview, she understandably balked—why was her new employee already doing another job interview? No, he assured her, he was only talking to a journalist about how and why, under the name brianfromshitboro, he’d recently mapped, reviewed, and numerically rated every bowel movement he’d had along the 2,194-mile Appalachian Trail using the social media app Poop Map. He’d even analyzed his efforts for hiking website The Trek. He watched as regret flooded her face.

“She told me, when guests in the huts were eating dinner, not to tell them about the app, which I think is valid for dinner but not in general,” Garner said, laughing during a 30-minute work break. “She was just confused. She didn’t get the whole joy of Poop Map.”

Garner’s transgression of enthusiasm can be forgiven: only a month before he arrived in New Hampshire, he was surrounded by fellow thru-hikers, an audience that already spends a sizable chunks of its days thinking about food and bathroom breaks in tandem. Indeed, as silly as it seems, Garner’s 134-day curvilinear path of mapped poops from Georgia’s Gooch Mountain Shelter (“very small pebble, three stars”) to the Katahdin Stream Privy (“last poop of the AT in the last privy of the AT, four stars”) represents perhaps the most honest index of the trail I’ve ever seen.

“Knowing I was going to get a lot of poops up and down the East Coast was just so exciting.”

Not only does it reveal the intense intimacy that thru-hikers—many of whom were recently strangers—develop in a matter of days, but also how a hiker’s bodily movements impact their body’s actual movement. To scroll through Garner’s Poop Map is to see the gastrointestinal distress and concomitant sluggishness that comes with an indulgent stop in a town or the measly rations of a walk in someplace as desolate as Maine’s 100-Mile Wilderness, where he only registered two entries. Looking at Garner’s diary of defecation immediately reminds me of the physical lows (an uninterrupted month of upset stomachs) and emotional highs (lifelong best friends made in less than a week) of my own time on the AT, the surreal wonder and pain of it all.

“On trail, the app would come up relatively quickly, because there’s so much talk about poop,” said Garner. “But in regular life, I can’t bring this up or just go up to random people and start telling them about Poop Map.”

Garner joined the scatological-media network in early 2020, when he was a junior in a Massachusetts high school. It was a lark shared among friends who used it for a month of cheap chuckles, then abandoned it. But Garner—who told me, repeatedly, and without irony, “this is the best app I have ever seen”—stuck with it, even chronicling all of his poops during a hike of Vermont’s Long Trail after graduating in 2021. His devotion to Poop Map—which boasts 4.25 million registered users and 60,000 daily, uh, “loggers” even steered his college plans. After spending a semester at the University of Vermont, he decided to take a gap year and hike the Appalachian Trail. “Knowing I was going to get a lot of poops up and down the East Coast was just so exciting,” he said. “It’s just so funny to me.”

This is all incredibly silly, I know, and Garner is a willing joke on behalf of Poop Map. He points out scatological puns where they barely exist (“duty” always gets a laugh), and he once sent me an Instagram message just to say, “Everything is about shitting.” But I do think he has tapped into something crucial about thru-hikers. Whether out of boredom, or the need to constantly reassess our physical and mental states, hikers spend a lot of time contemplating the waste we create—what it says about our body, where it’s going, how far away it is from the water source someone will soon use.

We carry multi-colored trowels for digging “cat holes.” We carry days of extra toilet paper. (But never too much, because who needs all that triple-ply weight?) We attach portable ultralight bidets to water bottles. And then we talk about it all with new friends, devoid of shame or social inhibition.

“Normally you just go to the bathroom and then flush the toilet and then leave and go eat some cookies,” said Garner, chuckling so little at that last bit I forgot to ask if that’s what he actually does. “But what is normally a basic thing that nobody really thinks about becomes something you think about a lot on trail. Do I want to hang out in this cabin for ten more minutes so I can use a privy or dig a cat hole later? Digging a hole is hard work.”

This acknowledgement of our most basic shared biology humanizes us.

Anastasia Allison laughed the first time I told her about Garner’s map, allowing the kind of “Oh, wow” with which a guy who tracks his scat is likely familiar. But she instantly got it, too. In the four years since Allison launched Kula Cloth, she has sold over 200,000 pee clothes, many of which can be seen dangling from backpacks now bouncing down trail. Those imaginatively illustrated rags have curbed the stigma of using the bathroom in the outdoors, especially for women, trans men, and nonbinary folks. It’s a small but profound transformation.

During her first backpacking trip in 2005, Allison—who went on to become a backpacking instructor herself—was so intimated to ask her guide, an older man, about bathroom etiquette outdoors that she snuck into her tentmate’s bag to steal toilet paper. “I felt shame about talking to him about how to use the bathroom because of my upbringing, because of beliefs about the human body,” she said. “Bodily functions were this thing we needed to hide, that we didn’t talk about.”

Not long after Kula Cloth began, for instance, Allison received an email from an early customer who said the company had changed her outdoors life, because she no longer dehydrated herself before hiking for fear of peeing in public. That may sound absurd, Allison admitted, but these are the kinds of puritanical limits we sometimes put around our bodies, around each other. Visible pee rags, public poop maps, and sharing the outdoors together cut against those barriers. “We’re all people, and we all pee,” said Allison. “We can make that normal in the process.”

This acknowledgement of our most basic shared biology humanizes us. And I think it has the power to start making us think about our role in the world a bit differently, too. This summer, I have been living above a cave in South Dakota, laughing whenever I hear a park ranger tell a shocked tourist that, if you use the bathroom in the cave, you must carry it to the surface yourself. Toilets, trashcans, and recycling bins—we think so rarely about the messes we make that there’s an explosively viral kids’ song where pigs, sharks, and even elephants all shit in a toilet they then flush. But it’s hard to abdicate responsibility for your waste when you’re in the woods or underground for days at the time, when nothing makes it magically disappear. Only you are responsible for your waste.

There is, of course, a decent chance I am making much ado about, well, you know. Maybe Garner’s 2,194-mile pilgrimage of poop is just hilarious and not actually or telling or potentially transformative. If so, that’s OK, too. After all, in reporting this story, I downloaded Poop Map just to follow Garner—or, sorry, brianfromshitboro—and read his on-trail reviews: “Last pennsylshit!” “This poop was green. I’ve also been walking through superfund sites. Coincidence?” “Regretting that pizza.”

But now that I’ve reached the last paragraph, I don’t think I’ll delete the app or unfollow him. Every morning when I wake up, I learn that, somewhere in the White Mountains, brianfromshitboro has, as the app puts it, “dropped a new poop.” I think about him laughing as he calculates an arbitrary score, and I smile in spite of myself, even if his new boss doesn’t.