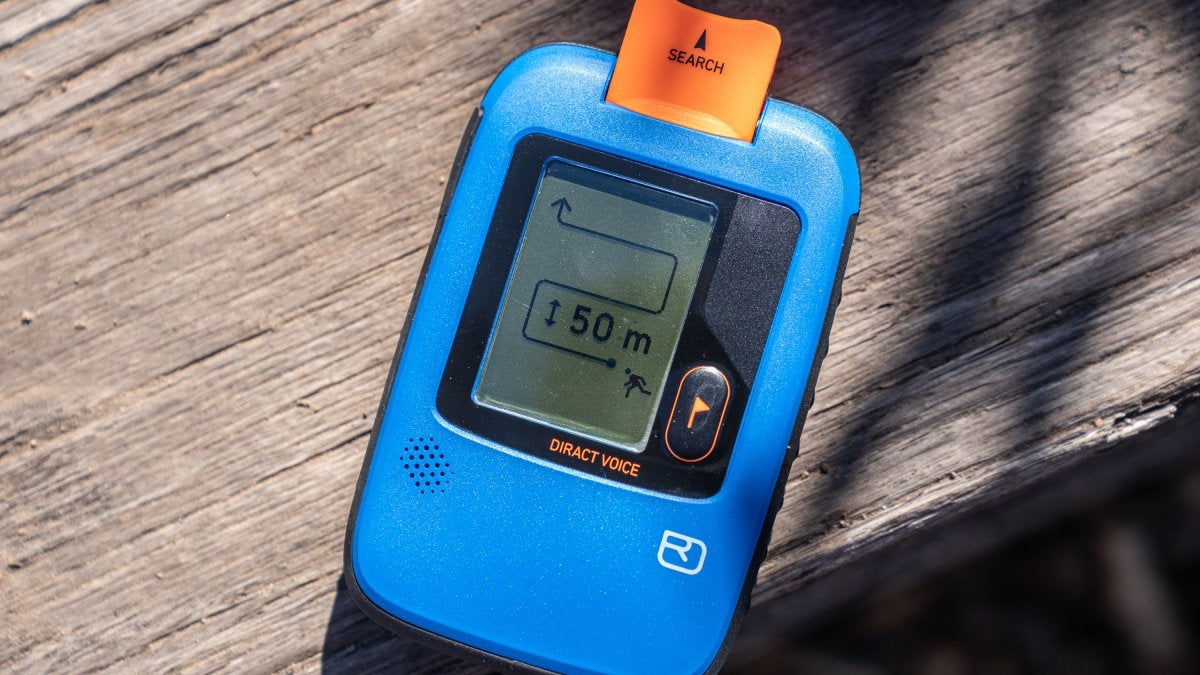 The first week of February was tragic. Fourteen people—ten backcountry skiers, one snowmobiler, and three climbers—were killed in avalanches across the country, breaking a 1910 record for the most avalanche deaths in one week. In at least two of the incidents, the skiers’ beacons malfunctioned—one was outdated, and another had a corroded battery compartment. Both conditions inhibited the devices’ ability to accurately send or receive a signal.

These malfunctions were not responsible for the victims’ deaths, but this sudden spotlight reinforces the importance of carrying a functional, efficient transceiver. Beacons are inherently simple devices, and while the technology has improved over the past ten years, major innovations in the field are rare. That’s why a new offering from Ortovox, the Diract Voice ($380), which launches in September, is exciting.

The Diract Voice is the first beacon to use verbal directions. When you switch the device from “send” to “search” mode, it shouts out audible commands to help guide your beacon search—similar to GPS directions on a smartphone. (There will also be a version without voice commands, for $320.)

I tested the Diract Voice in January and found its directions to be straightforward. Before I acquired the signal of the transceiver I was looking for, the device told me to “run in 50-meter search strips and look out.” Once I acquired a signal, it instructed me to run straight toward it and guided me left or right if I veered off course. As I moved within ten meters of the signal, the beacon stopped telling me to “run” right or left if I needed course correction and instead said “walk” straight, right, or left. Tom Mason, brand manager at Ortovox USA, says the use of the word “run,” even after you’ve acquired a signal, is intentional.

“We’ve seen that people move quickly during a signal search, but once they acquire a signal, they slow down and start making too many microadjustments,” Mason says. “But if you’re still 40 or 50 meters out, you don’t want to slow down. You still want to be moving quickly and making macroadjustments.”

Ortovox says the beacon will not bark commands if you’ve acquired a signal and are heading in the exact right direction. In my test, the voice commands were always being issued, because heading along the direct path takes a few pointers. I tried to fool the Diract Voice by heading the wrong way and was immediately told to turn around. Once I got within six meters of the buried beacon, my device said to “go down to the snow surface” and start my fine search. (Ortovox says the six-meter figure might change slightly before the final version is released.) At this point, the arrow on the digital screen went away, the numbers got bigger to help with the fine search, and the beacon told me to “search the smallest value.” If I started to move away from the signal, the device said, “You were closer.”

The Diract Voice also allows you to flag the position of different victims if you’re dealing with multiple burials. In between commands, it lets out beeps that become more frequent as you get closer to the signal. A digital display on the front screen—about 1.5 inches by two inches—shows an arrow and numbers. The arrow points you in the general direction of the signal once it’s acquired, and the distance counts down as you get closer to the transceiver you’re searching for.

In a press release explaining why the company decided to include voice commands in the Diract Voice, Ortovox quotes Sirgun Holzer, a German psychologist who specializes in neuropsychology. “The voice navigation alone is a great help because you can keep your eyes focused on the situation and not on the device,” Holzer says. “Visual information needs to be processed first and then translated into an action. When this is done for us by a voice and the instructions are direct, we save ourselves one step in the processing sequence. Thus, clear instructions mean we need less cognitive capacity, which is already limited in such a situation.”

Speaking on the same subject, Mason compared the Diract Voice to a medical device like a defibrillator—many of which provide audible instructions to aid the rescuer. He says that during the development phase, Ortovox product developers speed-tested the commands, landing on a rate of speech that suggested urgency but didn’t add stress.

The Diract Voice uses a rechargeable battery that, according to Ortovox, lasts longer than the standard AA or AAA batteries in other beacons. (The brand won’t give an exact number; it’s important to regularly check the battery life on any transceiver you use.) It does say that the Diract Voice easily meets and surpasses the industry standard of 200 hours in transmit mode at 10 degrees Celsius (50 degrees Fahrenheit) and one hour in search mode at -10 degrees Celsius (14 degrees Fahrenheit).

Ortovox claims this battery will not leak, which would resolve the issue of a corroded battery compartment. You can’t replace the rechargeable battery like you can with a set of AAAs, but if you’re on a long backcountry trip and worried about the battery running out, the Diract Voice can be recharged with a power bank and USB-C cord.

After witnessing an avalanche several years ago in Colorado, my brain’s first response was to fog over with stress. I saw my guide disappear, with table-size chunks of snow chasing him down the hill. They managed to outrun the avalanche, but before I knew everything was okay, I immediately worried I was going to mess up the search process. I know the correct procedure to follow but still get a tinge of fear every time I strap on a beacon and wonder if I’ll be able to find someone quickly in the event of a burial. Knowing that the Diract Voice can help guide me in a similar scenario gives me a little peace of mind. I’ll be adding this device to my quiver, but I’ll still regularly practice with a normal beacon or with the voice commands turned off, because they can’t and shouldn’t replace standard search procedures.

I suspect some veteran backcountry skiers and guides won’t want to use the Diract Voice, because they’re accustomed to standard beacons and might be annoyed by a device chirping out commands. But for plenty of backcountry skiers, myself included, voice directions have the potential to help us conduct a more efficient search.

Who will really construct the Greylock Glen out of doors middle?...

The outside are so white. This is how Lena Waithe and...

Glad #EarthDay! Get entangled in #GenerationRestoration by means of our information with...