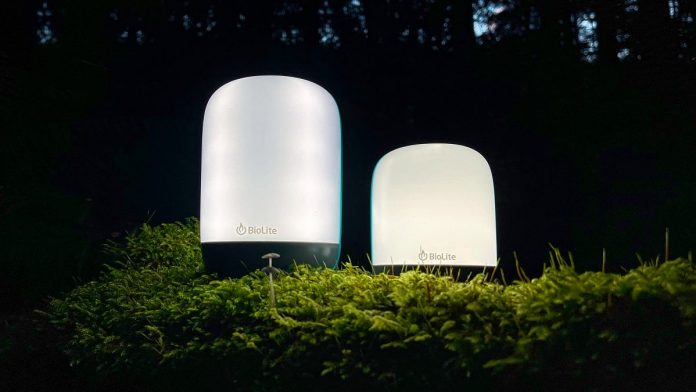 When I wrote about outdoor gear that makes camping with kids more fun, I hadn’t yet tried BioLite’s AlpenGlow rechargeable lantern. After a few months of use, I’d now put it at the top of that list. With a bunch of different color modes and settings, the AlpenGlow has proved a useful light for camping, backyard barbecues, evening hangouts, the occasional dance party, and a ton of other activities. It’s not going to revolutionize your outdoor setup, and there are better activity-specific lights, but the AlpenGlow is a practical do-it-all gadget that also creates a chill vibe—that’s why it’s my favorite family road-trip item.

There are two sizes of BioLite AlpenGlow lanterns: the AlpenGlow 250 ($60) and the AlpenGlow 500 ($80). The smaller lantern is about the size of an apple; the bigger one is closer to a grapefruit. Since the beginning of June, my family has used the larger, 500-lumen light every single day. (I’m not kidding; it’s that multifunctional.) My partner and I found the lantern useful for our son’s bedtime routine, so we added the smaller, palm-sized 250-lumen unit to the mix. After reading a couple stories, we dim the latter to the lowest warm setting and leave it on for an ambient glow.

Both lanterns have four color modes—cool, warm, single color, and multicolor—and a dimming feature. One big button on the top toggles between everything, which makes it easy for kids to operate. With the built-in accelerometer, shaking the lantern activates features like the single side-light, warm flickering candlelight, and single and multicolor cycling modes.

The mini version replicates everything that the larger one does, except the multicolor modes aren’t as advanced. The smaller unit splits the color between two panels, with a single color lighting up each side. On the AlpenGlow 500, three colors blend into each other in nature-mimicking shades across the entire lantern, with hues reminiscent of pink and yellow sunsets, northern lights, and foggy early morning paddles on a lake. Shake once and the lantern cycles through the different color palettes. Shaking twice activates a color-burst mode that creates a firework-like effect—the coolest feature, if you ask my kid (and what he refers to as “dance party mode”). I think the advanced multicolor modes on the 500 are a worthwhile upgrade.

The bright-white setting helps get tasks done. We use it for everything from cooking outdoors in low light to vehicle repairs. The built-in hook, dimming feature, and option to illuminate only one side of the lantern mean you can direct light where you need without it shining directly in your face. The candlelight setting creates an inviting, warm atmosphere during outdoor dinners or when playing evening card games at the campsite.

The AlpenGlow doubles as a power bank with a standard USB output, which is great because my cellphone battery is almost always in the red zone. The lantern saved my ass a few times road-tripping when I had no other power source options. Indicator lights on the front let you know how much juice you’ve got left, and when the lamp is low on power, only the most basic modes work.

My toddler has dropped the AlpenGlow a few times, and even after all this abuse, it still doesn’t have a scratch or dent on it. It’s portable and fairly lightweight (the 500 weighs 13.4 ounces, the 250 is 7.4 ounces), making it versatile enough for backcountry trips if you don’t mind a little added bulk. It won’t replace the need for a headlamp, but if you have the backpack space, it makes for a nice ambiance around camp.

The 500 emits 500 lumens of light on high and five lumens on low; the 250 delivers 250 lumens on high and 2.5 lumens on low. Both last for five hours on high and 200 hours on low and take around three hours to charge. Rated IPX4, the AlpenGlow isn’t waterproof, but it is protected from splashing water—rubber seals cover the charging ports—so a bit of rain won’t harm it. All in all, the AlpenGlow has been a valuable addition to our car-camping kit and also works well in our home life. For nice-to-have items that are both functional and fun, this is a front-runner for me.

TPGY Inventory Will Preserve Climbing Forward of Its Blockbuster Merger

Veterans be taught bodily, psychological abilities at out of doors camp