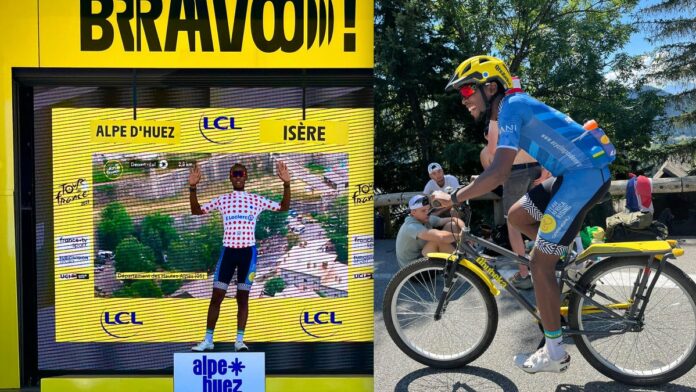 This article was first published by CyclingTips.com.

Even when you’re driving Alpe d’Huez, it’s steep—a brutal opening ramp, 21 switchbacks, and the July sun beating down on your back. Now imagine doing that with a single-speed bike that weighs 40 pounds.

Niyonshuti’s ride was uncomfortable, but he’s overcome much more in his life. After he survived the horrors of the 1994 Rwandan genocide—six of his brothers were not so fortunate—Niyonshuti discovered cycling at the age of 16. He was one of the original members of Team Rwanda, the cycling project launched in 2007 by Americans Tom Ritchey and Jonathan “Jock” Boyer, which aimed to create a national racing team to inspire more Rwandans to ride.

By 2009, Niyonshuti’s talent had attracted the attention of the MTN Cycling team, with which he became the first Rwandan professional cyclist. In 2012, he was the flag bearer for Rwanda at the London Olympics, riding in the mountain bike event, and returned to the Olympics four years later in Rio, this time on the road. After retiring at the end of the 2017 season, Niyonshuti has transitioned gracefully into a career as an ambassador for cycling in Africa, founding the Adrien Niyonshuti Cycling Academy in his hometown of Rwamagana and establishing the Continental level Skol Adrien Cycling Academy team.

He never achieved his dream of riding at the Tour de France, though, so today was an emotional one. On the steep slopes of Alpe d’Huez, thronged with fans at each of the iconic hairpins, Niyonshuti slowly ground his way upward on the heavy bike with one speed. By contrast, most top-end racing bicycles weigh a paltry 15 pounds, and have 22 or so gears to choose from for the gradient.

“Some people were wondering who this guy was, where I came from,” Niyonshuti told me at the summit with a wide smile on his face. “I explained to them I was a two-time Olympian riding to support Qhubeka, and they were very happy about it. Each kid that grows up in Africa and knows cycling wants to go to the Tour. Everyone growing up is thinking about the Tour.”

The ride is a fundraiser for the South African cycling charity, which provides bikes for people in Africa to improve access to educational and business opportunities. The Qhubeka bike is a toughly built single-speed with a steel frame and a big yellow rack at the back to carry goods—“15, 16 kilograms [35 pounds],” Niyonshuti said, assessing it with his hands.

Niyonshuti understands from experience the impact that access to a bike can have for someone trying to get ahead in Africa—he’s been there before. “I have seen for myself how they [Qhubeka] use bicycles to change lives.”

With the sun beating down on us, Niyonshuti looked amazingly fresh as he told me about his cousin and nephew, who in 2012 had received a Qhubeka bike. That helped them complete their education: “They went to school, finished primary school and high school, and in the end they got encouragement to continue their cycling, and now they’re in France [ed. racing for a French team].

“The Qhubeka charity is something that can change education in Africa, and help African kids for their education. That’s the most important thing,” Niyonshuti told me. “But maybe it can also change their dream to become a cyclist.”

And so, today on Alpe d’Huez one dream was realized and the seeds were planted for many more.

To find out more about the fundraising initiative, or to donate, visit letour.fr.

Editorial Roundup: Climbing charge of hate crimes impacts all of us...