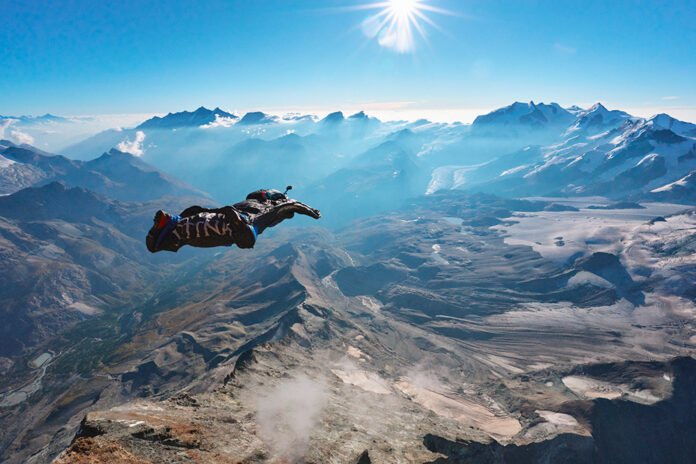 British mountaineer Tim Howell has completed his ambitious North Base Project which aimed to climb and fly the six great North Faces of the Alps. Depending on the mountain, the 33-year-old Brit either made a wingsuit flight or BASE jump. The Eiger, Cima Grande di Lavaredo, Pizzo Badile, Petit Dru, the Matterhorn and the Grandes Jorasses, inspired by Gaston Rébuffat and his book ‘Starlight and Storm’, but with ‘my own unique and niche twist on the goal.’

British mountaineer Tim Howell has completed his ambitious North Base Project. Seven years in the making, this involved climbing the six great north faces of the Alps and then flying from the highest exit point on each mountain. Howell climbed the Eiger, Cima Grande di Lavaredo, Pizzo Badile, Petit Dru, the Matterhorn and the Grandes Jorasses and either made a wingsuit flight or BASE jump, depending on what the mountain offered, and some flights were carried out not on the same day as the ascent but at a later stage when conditions were favourable. The 33-year-old, who has become the first person to climb & fly the six great North Faces of the Alps, told planetmountain.com “Gaston Rebuffet described these north faces and the routes in his book “Starlight and Storm” and I wanted to put my own unique and niche twist on the goal.”

Tim first off, how did you get into Base Jumping?
Climbing was my first passion. My first experience of BASE jumping was in Tonsai, Thailand. A paradise for sport climbing as well as BASE. I helped a friend reach the exit point as it required some climbing and they weren’t too confident on lead. At that point I had 50 skydives and was hoping for an opportunity to BASE jump on that trip. Nevertheless it would take me another 150 skydives to gain the experiences to start BASE. The first time I saw wingsuit BASE was halfway up a big wall on Monte Brento, Italy. We were awoken at 5am by wingsuits flying past us with the noise of a fighter jet. To me, BASE jumping and wingsuiting became a logical step from climbing and mountaineering.

Where did the idea of climbing and jumping the 6 North Faces come from?
When I climbed the North Face of the Eiger, throughout most of the climb I could see the famous “Mushroom” rock feature which is very popular for wingsuiters. I had just started BASE jumping and knew I had to return to this exit and jump it. Then I realised that the other 5 summits probably had exit points on them, so I could set my sights on a unique goal: to climb the 6 great North Faces of the Alps as well as BASE jump from the highest exit points on each summit.

What was harder, the actual climbing or the jumping?
It’s really hard to compare all the North faces because of the different styles and conditions, and my ability as I climbed them grew each year. I climbed the North Face of the Eiger when I was very naive and had little mixed climb experience, but the normal “Mushroom exit” is a very easy jump, with a large amount of freefall before impact. I found the Walker Spur on the Grandes Jorasses very demanding, the flight was amazing, long and varied but it was more of a survival flight just to get down to the valley quickly after such a long day.

What did each mountain give you? Can you talk us through them?
I climbed the Eiger via the classic 1938 route, with James Hoar on the 19th of April 2015, and made a wingsuit flight via the South face exit, 14th Aug, 2021 at 3802m. The South face exit is the highest exit on the mountain and is the most technical; the North facing exits are from the Mushroom, while higher up is the “Ecstasy board” which Dean Potter opened. The Eiger was the first of the North faces for me, I climbed it with an old school friend. I was pretty naive about the climb having only climbed one grade 5 Scottish winter climb beforehand. A few days later I jumped from the Mushroom with a wingsuit, but it took a few years extra to get enough experience to jump the south face, a long and committing flight over the glacier.

Next up the Cima Grande di Lavaredo in the Dolomites.
On the 12th of August 2015 with Charley Radcliffe. After the climb I made a North Face Wingsuit exit, on the same day. I was confident about this route, seeing as it’s quality rock and a relatively short route. Charlie and I swung leads, on the summit I had stashed my wingsuit the day before, so I flew down after a few moments relaxing on the summit.

What next?
Pizzo Badile, Cassin Route with Nick Boreham on the 27th July 2017. BASE jump on the 16th September 2018 down the South face, via a Static line base jump from a new exit, without wingsuit. A small scramble down from the summit we found a very short but vertical cliff. Very low altitude to impact so we had to use a static line for quick deployment of the parachute. Nick was a military colleague who had recently recovered from a broken back, and after rehabilitation and getting back into climbing it was an awesome experience to climb this route with him. Piz Badile was the missing part of the North BASE project because no-one had ever jumped from the mountain before. Its slabby faces make it hard to find an exit, so I came back the next year with Ryan Walters and without the wingsuit to find a static line BASE jump. This method deploys the parachute very quickly and allows us to jump very short cliffs. In this case the vertical part of the cliff was 34m before a large ledge that we could outfly. We fly for maybe 10 minutes or more before landing in the alpine meadows.

Next up?
Les Dru, Piere – Allain route with Dave Coates on 24th July 2020. I took the North Face summit exit on the 18th of August 2021. After two failed attempts – one due to rockfall and a cut rope on the first pitch, the other due to an unpredicted storm – I finally climbed the Dru with my good mate Dave. We got caught in a storm and bivied early which set us back. We got caught again in a storm the following day. Our hardwear was buzzing on the summit and we quickly abseiled off in the rain, absolutely drenched by the time we got down. Obviously a storm isn’t the best conditions to fly in, so I came back with two friends via the normal route to wingsuit from the summit. A rock diving board makes a perfect exit point as the Virgin Mary watches you jump. I flew through the clouds that were starting to form and landed back down in the valley shortly afterwards.

Matterhorn or Grandes Jorasses next?
Matterhorn, Schmid route, on the 17th Oct 2021 with Irish climber Naoise Ó Muircheartaigh. I returned with Hamish Frost on the 11th of August 2022; we abseiled from the statue to about 70m below the summit and then I jumped the East Face in a wingsuit, solo. Another few failed attempts for this North face, the first was due to conditions. Powdery snow and no ice made the mixed sections complicated and time consuming so we backed off. The next attempt my partner had an unfortunate accident and got helicoptered back down to the hospital, during his two hours of surgery I rung up some other mates to see who would be free for another attempt in the following days. Naoise answered the call and we climbed the route in perfect conditions. It was the final jump for me to make, the Hörnli ridge was very dry enabling a quick solo to the summit. The air was a little turbulent, but I flew to the North side then back over the Hörnli hut before pulling my parachute and landing in the dry river bed.

Grand finale on the Grandes Jorasses…
On the 18th of August 2022 I completed the project by climbing the Walker Spur with Joe Heeley. This was the last climb I did, having not spent too much time climbing this year and not having been in the mountains I wasn’t feeling the strongest, but Joe was an excellent partner to climb with. I probably found it the hardest of the 6 just because I had been away from the sharp end for so long. I had done the jump 2 years before with Marco Milanese, having reached the summit via the normal South Face route. We exited about 70m below the summit, having made a few sketchy abseils to reach a very small section of rock to jump from. We turned right from the exit flying over the col and back to the Italian side, flying past the ridges and towers and landing in the fields below.

The project most certainly evolved over time. What are you you most proud of? And perhaps least proud of?
Finally finishing my goal after 7 years! There have been plenty of occasions I have also turned around on certain jumps or climbs. The ability to say no after a lot of hard work reaching the summit is important. If the conditions aren’t right, live to fly or climb another day. As to what I’m not proud of, well I would have liked to have completed the routes in a quicker time, but life gets in the way.

Talking about life, that leads to a tough last question Tim: BASE jumping has a frighteningly high casualty rate. It’s almost as if you guys are jumping yourselves into extinction. You all are aware of this, nevertheless you keep on doing it. The highs it gives you must be really high…
I can’t deny that and it does show how incredible the experience is, when there is a fatality on the mountain and the next hour you’re jumping again. We never really think it will happen to ourselves but some years have a large fatality rate. Some types of flying just aren’t sustainable and you play a numbers game, (more so than other types of flying.) Of course things change, such as the mindset, goals etc, but I want to be jumping for my whole life and I don’t plan on ending it prematurely. It all comes down to decision making, mitigating risk and knowing when to say no. With 1000+ jumps and no injuries so far I’m happy with my decision making process.

Participation in Outside Actions could be a Nice Supply of Recreation...

Small beer: Calm Down Karen, climbing and a style of Belgium...

New ‘glamping’ websites on the horizon as SA pitches for larger...

ORR releases report on out of doors recreation profession alternatives