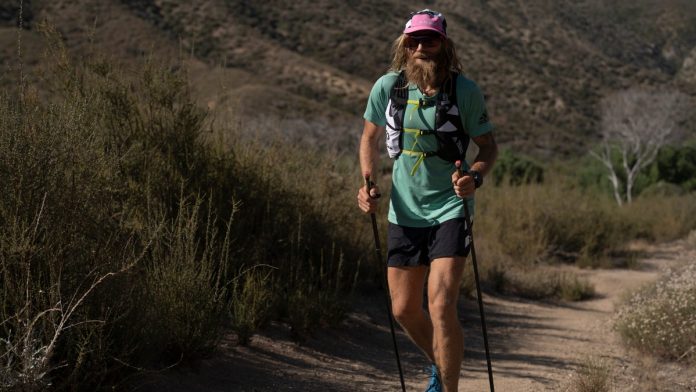 Fifty-two days, eight hours, and twenty-five minutes. As of Thursday evening, that’s the record Timothy Olson appears to have beat running from border to border, Mexico to Canada, on the Pacific Crest Trail. Once Olson’s own time is confirmed, he will have completed the PCT faster than anyone ever before.

When Olson arrived at the northern terminus of the PCT at 10:48 P.M.on Thursday, he seemingly surpassed the record held by Karel Sabbe from Belgium since 2016. An FKT on the PCT, which winds through 2,652 miles of rugged mountain terrain in California, Oregon, and Washington, is one of the most prized speed records in thru-hiking and ultra-running. And for good reason: Olson averaged more than 50 miles a day for seven weeks straight for this record, often at alpine altitudes, gaining more than 400,000 feet in elevation. Not to mention another 400,000 feet of elevation loss.

Olson wore a GPS tracker for the length of his run, and once the data is confirmed, the official time will be released. (The complete tracker data has yet to be made public.) He started his journey in Campo, California, on June 1, which suggests he beat Sabbe’s time by less than 24 hours. The record comparison is complicated by the fact that trail adjustments, closures, and above all, seasonal wildfires, mean that the Pacific Crest Trail varies in route and length every year. This means that Olson, along with every thru-hiker, had to improvise: at least once, Olson ran up to a trail closure, turned around, ran back to a trailhead, and was driven to the other side of the closure. The extra added miles approximately equaled the distance of the closure, so even if Olson could not run every mile of the trail, he likely ran as many miles, if not slightly more.

Olson is not an amateur athlete, and this isn’t his first ultrarunning record. He once held the record for the Western States 100-Mile Endurance Run, which he won in 2012 and 2013. But running the PCT is a fundamentally different challenge, physically and logistically.

Many FKT attempts on the country’s “triple crown” of thru-hikes, which also includes the Appalachian Trail and the Continental Divide Trail, end in failure, often due to injury, inclement weather, or sheer exhaustion. Olson was supported by a team of seven following along in two RVs, rendezvousing with Olson as he passed through trailheads, and handling logistics like food and laundry. Most nights, Olson slept in an RV. But in several especially isolated sections, such as the Sierra Nevada, Olson spent the night alone, sleeping on the ground along the trail.

“To travel the entire trail in a single season is remarkable. To do it faster than anyone ever has? It’s mind-boggling.”

Sweetening the moment of victory for Olson is that his wife and fellow ultrarunner, Krista Olson, is eight months pregnant with their first daughter. “Each step of the journey, I am connected to my family,” Olson wrote on his Instagram as he ran through Snoqualmie Pass in Washington. Krista and both of his sons, Tristan, 8, and Kai, 5, were active members of his support team, meeting him at trailheads and assisting with logistics. Sometimes, his sons even joined him for brief sections of trail.

In addition to record-chasing, trail running has helped the Olsons cope with loss—in particular, two miscarriages they experienced before their current pregnancy. As part of the FKT attempt, they’ve been raising money for Return to Zero: H.O.P.E., a non-profit that supports families going through pregnancy loss or baby loss.

Thru-hiking the Pacific Crest Trail is an elite physical challenge, even at a normal pace. In 2019, the Pacific Crest Trail Association issued 5,441 thru-hike permits, and another 2,437 permits for section hikes. Of those, only 1,181 people self-reported as having completed the entire PCT. Typically, thru-hikers finish in five to six months, carrying their own food and gear, and sleeping in tents each night. Completing the trail in less than two months, and the logistics needed to make an FKT attempt possible, registers on an altogether different scale of magnitude.

“In a normal year, only around one-fifth of the people who set out to hike the entire PCT actually succeed,” says Scott Wilkinson of the Pacific Crest Trail Association. “To travel the entire trail in a single season is remarkable. To do it faster than anyone ever has? It’s mind-boggling.”

The number of thru-hikers grows each year, as does the number of competitive ultrarunners. For those reasons, Olson’s FKT attempt certainly won’t be the last. But for now, he can rest easy knowing that he is very likely the fastest known PCT thru-hiker of all-time.

Blunt calls on Senate to undertake invoice supported by Missouri’s $12...

Which Carabiner is finest?| Choosing the proper one for each state...

the 5 greatest crags for Dolorock 2021