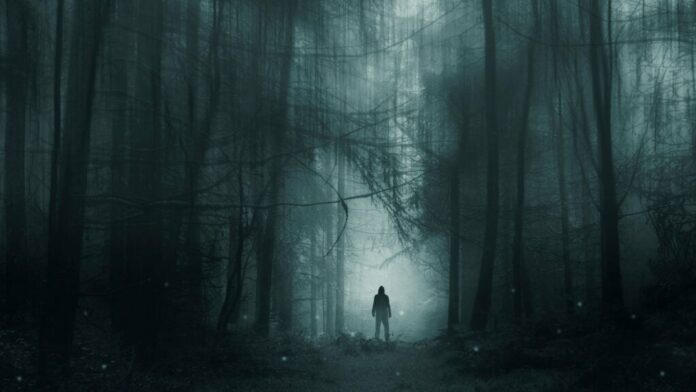 I am not a horror fan. When I’m settled around a campfire and someone asks, “Do you want to hear a ghost story?” I respond with a hearty, “Nope!” I am, however, a fan of audio—I work as a podcast producer—and I’m a sucker for a good gimmick. So when I learned about a horror story that can only be heard in Sweden’s forests, I was immediately smitten. I hopped a plane to Stockholm shortly after and headed to the woods to scare myself silly.

The mysterious piece of fiction, called Kiln, is written by John Ajvide Lindqvist, Sweden’s answer to Stephen King. He’s written over 20 books, including Let the Right One In, a vampire novel and his best known work in the U.S. You can’t pick Kiln up at a bookstore or even a library, however. Instead, it’s an audio story you stream on your phone that has been geo-locked within Sweden’s borders, forcing fans to quite literally follow him into the darkness of his country’s forests. For Halloween weekend, however, it’s been unlocked and is available on Spotify for anyone who wants a taste.

After arriving in Stockholm, I headed to the woods of Västmanland, a region about a two hour drive from Stockholm. While you can technically listen to Kiln anywhere in Sweden, you could also watch The Shining on your phone in the yogurt aisle of the grocery store, but you wouldn’t, would you? So I opted to follow recommended listening practices and found a good forest to walk through. Thanks to Sweden’s freedom-to-roam laws, you can walk in any woods in the country. I opted for one near the Fallängetorp farm, a bed and breakfast in Västmanland. I was alone when I walked into the quiet woods, armed with headphones and a link to Lindqvist’s story. I have been in the woods many times, but it’s never felt quite so lonely.

Creeping myself out in the forest was exactly what Lindqvist was hoping his story would facilitate. The project began when Visit Sweden, the country’s tourism board, asked Lindqvist to write a story that would help encourage visitors to leave the urban centers and go into the woods. They created a web page to access the geo-restricted story, as well as recommendations for national parks to visit throughout the country to listen to it.

Tourists in Sweden tend to crowd Stockholm’s coffee shops or or head to Malmö to explore its eclectic restaurants, but the country is covered in trees, and its forests are very much part of Sweden’s national ethos.

“You haven’t really visited Sweden if you don’t see our forests,” says Lindqvist. “They are a part of the Swedish identity.” Tree-filled stretches like Västmanland lie right outside of Stockholm, and the lake-filled district of Värmlandand Lapland spreads to the northernmost reaches of the continent, waiting for outdoor enthusiasts to explore.

It’s not only the woods that Swedes love—the paranormal is built into their lives as well. Fairy tale creatures like trolls, elves, huldra, and Näcken are as much woodland creatures as moose and bears. “The supernatural has always played an active role in Swedish culture,” Lindqvist says. “It is more than just a backdrop to the crime stories and Nordic noir movies that have made the country famous.”

When Lindqvist was a child, he had a healthy fear of the woods and those that live in it. “The creatures that scared me as a child were big locusts, especially the kind that have a sort of neck. They can slowly tilt their heads and look at you. What are they thinking?” he asks. The forest was a sinister place to him, the perfect setting not for kidnapping or physical harm, but something worse—“ceasing to exist.”

“The supernatural has always played an active role in Swedish culture,” Lindqvist says.

As I walked through the forest, I began to see why Lindqvist found the woods to be such an unsettling place. The forest in Sweden is not like the wet, piney forests I know in the Pacific Northwest or the crisp deciduous woods of the Northeast. The woods in Vastmanland are moss lined. Every step you take your foot sinks down a few inches like the ground is preparing to envelop you. Worse, each step disappears, the moss springing back up to leave no trace of the path you took. As I trek through the woods, I note the lingonberry and blueberry bushes, taking a rough inventory of foraging options, you know, just in case my trip goes longer than expected.

Before it gets too dark—I’m truly not brave enough to listen to a ghost story in the dark in unknown woods)—I find a misplaced boulder to use as a back rest, and settle onto the soft mossy ground. Then I put on my headphones and brace myself.

No spoilers, naturally, but the experience terrifying and wonderful and worth the trip. Kiln follows an unnamed visitor to Sweden (a tourist just like you!) who enters an unidentified patch of woods and emerges haunted by his experiences.

“Nature seems to come alive and lures you to come after it,” Lindqvist told Visit Sweden after being tasked with the story. It’s a tale that travels with you, or to crib the title of a horror movie I didn’t watch, it follows. You leave the woods, but the story stays in the back of your mind, even as you follow a path out of the trees, head back to the warmth of a bonfire, and travel home on the plane. The story wants you to come back to the woods. If you dare.

Vista Outside Expands its Board of Administrators with Two New Members