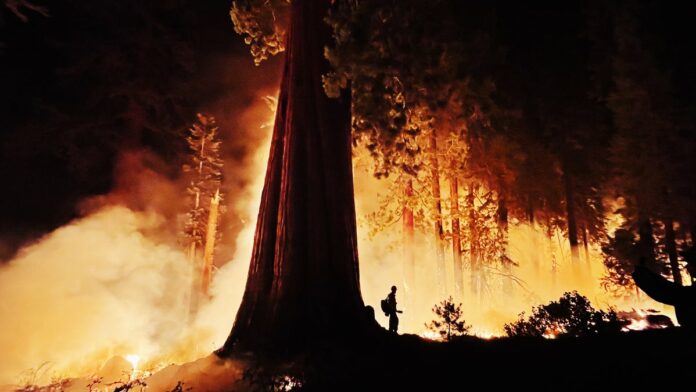 It’s near midnight in October 2021, and I’m watching flames pull themselves up the folded bark of a giant sequoia thicker than most bridge pylons. I’m walking down a fire line the width of a sidewalk, a few miles south of the entrance to Sequoia and Kings Canyon National Parks, that runs down a ridge on the northern edge of the KNP Complex, a surly 88,307-acre blaze spreading toward the highest concentration of giant sequoias anywhere on the planet, a grove dubbed Redwood Canyon. Complex is the term used when two or more fires merge, and this one had already burned near the Giant Forest and Muir Grove, the centerpieces of Sequoia and Kings Canyon National Parks. The KNP Complex was threatening to repeat the destruction caused by the Castle Fire, this time in the world’s best-known groves.

Joe Suarez, the superintendent of the Arrowhead Hotshots, a crew based in Sequoia and Kings Canyon National Parks, invited me and two cameramen to shoot tonight’s operation, because nobody had ever filmed sequoias torching before—burning from the ground up. Like the famous Robert Capa photo of a loyalist soldier being shot through the heart during the Spanish Civil War, perhaps the sight of 200-foot flames engulfing a majestic giant will prompt the public and politicians to make the changes necessary to save the park’s oldest trees.

All around me, hotshots hold drip torches and lean on hand tools, standing with their backs to the flames and daydreaming aloud about the trips they’ll take when fire season ends. This is a backburn, a controlled blaze set to reduce the amount of fuel in the path of an advancing wildfire. At the moment, that wildfire is in the canyon below. Watching fire run through sequoias is like watching water return to a desert arroyo that hasn’t been wet in a hundred years. After a century of aggressive fire suppression, the groves are parched.

The biggest sequoias are more than 300 feet tall and 100 feet around at the base. Their bark is two feet thick. The oldest have been alive more than 3,000 years and look like it, with gnarled limbs the size of mature sugar pines.

Sequoia cones look like bonbons. They hold 200 seeds each. When a fire burns at the tree’s base, the waxy sap that holds the cones tight melts, and the seeds slip out, floating down through the smoke in the tens of thousands. Sometimes every seed lands in the flames and all that genetic material cooks. Every once in a while, a few or even a great many seeds land where the fire has cleared the ground to expose bare mineral soil. When the heat has cooled and the winter rains have returned, sequoia seedlings push out through the ash and grow faster than almost all their competitors. They’re like weeds. After some fires, they grow thick like carpets. You can’t fit a boot between the stalks. Yet most little trees die sooner rather than later, because for the decade or two after the fire, the climate is too hot, or too dry, or too cold, or there’s not enough light, or another fire passes through and torches the babies before any individual sapling has grown tall enough to escape low flames or developed bark thick enough to withstand a fire’s heat. But for an individual monarch to fulfill its obligation to the species, it only requires that in its 2,000- or 3,000-year life, just one of the many millions of seeds it produces reaches maturity, which takes about 300 years. Sequoias’ survival strategy is a low-odds proposition, one that relies on realities that are changing faster than the species can adapt.

Scientists recently observed that, intentional or not, sequoias regulate fire intensity by raising the humidity in the grove. They dump some of the 500 gallons of water they slurp up daily through their roots back into the atmosphere through their stomata, the cells in the foliage that trees use to trade water for carbon dioxide. It used to be that a fire would burn hot beneath some trees and cooler beneath others.  It used to be that the odds were good that on that special day when a fire finally came, at least one monarch in a grove was going to get lucky.

The seeds are falling from the giant now. Some may very well sprout in the spring (and then die because of the drought), but they may be sprouting beneath dead monarchs that produced them. If the humidity is higher in the grove tonight, it may not matter. Suddenly there’s a roar, like the sound of a jet taking off. The world pulses orange, and a young sequoia disappears behind a curtain of 150-foot flames. The hotshot nearest me cranes his neck, tracking the confetti of sparks as they drift upward. Embers mingle briefly with the stars before wafting into the canyon below.

Garrett wasn’t with me on the KNP Complex. He was working the Windy Fire, a 97,000-acre blaze burning at the southern end of the sequoias’ range. He was assessing whether firefighters had a chance of saving any of the 11 groves the Windy threatened. At one point, he and his crew drove ahead of the fire to Starvation Creek Grove, where they cut smaller sugar pines and white firs out from under the giants. They had cleared just four sequoias when a fire chief radioed Garrett and told him to “get out now.” The fire had jumped its containment lines; the crew drove back to camp with a wall of flames flanking the truck.

When Garrett returned to Starvation Creek a week later, the fire’s head had moved on. Wind twisted dust devils of ash through smoldering oaks. Using a chainsaw, he cut and moved the trees that had fallen across the road. Long before he reached the grove, he saw black sequoias silhouetted against the blue skyline, smoke corkscrewing off their tops. Of the 160 trees in the grove, only the four his team cleared had survived. The others were like police chalk outlines, Garrett said. “No needles. No cones. Branches gone.”

Tips on how to Construct a Inexperienced Van

Out of doors teams are for brand spanking new dad and...