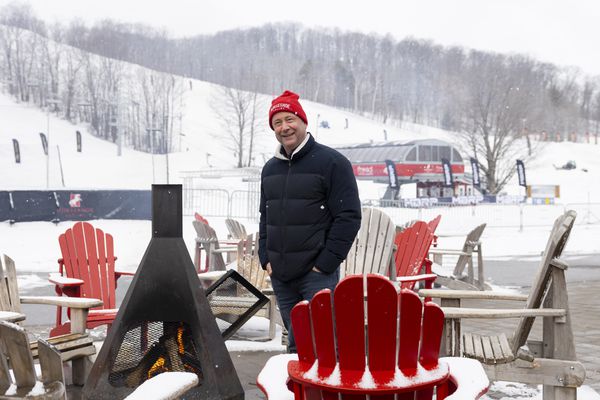 Peter Freed, founder of Freed Developments, is paying more than $330 million to take control of a handful of Ontario’s most prominent resorts.Ryan Carter/The Globe and Mail

Peter Freed has built his fortune over the past 25 years as a condominium tower developer, primarily in downtown Toronto.

Then, in late 2021, the founder of Freed Developments announced that he would pay more than $330 million to take control of a handful of Ontario’s most well-known resorts. Mr. Freed has ambitious ideas to expand Freed Hotels & Resorts and his main strategy is to build 5,000 to 7,000 condos designed for leisure use over the next decade.

It’s a bold move. It’s not just the hospitality industry that has taken a hit during the COVID-19 pandemic, the sheer size and scale of this real estate business could be the biggest swing yet in a career full of huge swings. So why, at the age of 53, did a man known for building big in Toronto’s King West neighborhood decide to shift his focus to Muskoka and Huntsville?

Mr. Freed has some experience in space. He founded Muskoka Bay Resort in 2002, carving a golf course into a rocky forest valley and filling the grounds with high-design clubhouses and luxury condominium villas. But the timeline for this 20-year project didn’t whet an appetite to repeat the process. Then the pandemic hit, and Mr Freed said his view of the abundance of Ontario’s outdoor offerings began to change.

“I used to spend a night or two in Muskoka Bay. I don’t think I ever stayed here for more than two or three nights in a row before COVID,” he said. “And then I was here 80 days out of 90 in January, February, March, [2021]and I’ve never been happier.

“When I leave town and come here, I actually relax. You know, my shoulders are two inches down, my neck is loosening up a bit, it’s a different headspace,” Mr. Freed said.

The deal included the 125-year-old Deerhurst Resort, the 60-year-old Horseshoe Ski Resort and a development land package at the Blue Mountain Resort. In addition to Muskoka Bay Resort in Gravenhurst, Mr. Freed has built one of the largest outdoor recreation businesses in Canada, with four golf courses, half a dozen restaurants and a range of facilities employing more than 2,000 people.

“I grew up visiting some of these properties as a kid, I went to Deerhurst as a teenager, I skied at Horseshoe as a teenager. … I’ve always left with the feeling that these are large open lots. I always felt like they were a little tired, that they needed a little love,” he said.

Raised in Toronto’s Forest Hill neighborhood, Mr. Freed began building custom suburban homes in the 1990s, which he funded with partners including the Goldhar family of the billion-dollar SmartCentres properties. He actually bought the land for Muskoka Bay before he even built his first condo (a nine-story building on Portland Street off King Street in downtown Toronto that was completed in 2006). He has since built a dozen other condominium towers, with more in development.

So when he heard a few years ago that Skyline Investments Inc. was looking to liquidate part of its hotel portfolio in Ontario, he was interested. “We were a natural potential buyer of these assets because most people who are in the development business are not also in the golf or hotel business,” he said.

In 2010, when Skyline was run by Canadian-Israeli businessman Gil Blutrich, the company went on a post-financial crisis buying spree, including the King Edward Hotel in Toronto for a reported $48 million and later Deerhurst for $26 million bought. Million. To expand his portfolio, Mr. Blutrich partnered with the Serruya family (whose frozen dessert empire CoolBrands International included chains like Yogen Fruz, Menchie’s and Pinkberry, and brands like Chipwich and Breyers before it imploded in the early 2000s) and The Russian- Canadian businessman Alex Shnaider.

At the time, Mr. Shnaider was a little-known operator who appeared to have made some of his money in the post-Soviet privatization frenzy.

Shnaider’s ties to Kremlin-backed business entities in Russia and Ukraine (he had dealings with now-sanctioned Vnesheconombank or VEB) would face further scrutiny in Canada for his role in financing the Trump International Hotel & Tower in Toronto, notably as Donald Trump’s foreign business ties have been highlighted during his 2016 presidential campaign and subsequent tenure. The hotel condominium tower was later pushed into bankruptcy, sold and renamed the St. Regis after Mr. Shnaider’s real estate company Talon International Development Inc. defaulted on a loan for the $500 million project in 2016.

Mr. Blutrich left Skyline in 2020 and pursued lawsuits against Mr. Shnaider in Israel, but the Skyline deal with Freed leaves Mr. Shnaider with a 29 percent stake in Mr. Freed’s new hospitality company.

Mr. Freed is reluctant to discuss partnering with Mr. Shnaider, who is not on any public sanctions list.

“I don’t like talking about politics,” said Mr. Freed. “I honestly met him once.”

Mr Freed said Skyline’s involvement is primarily to help with the purchase and he noted that he has the option to buy it out in late 2022, although that has not happened and Mr Freed remains a partner with Skyline in the resorts .

Skyline did not make Mr. Shnaider available for comment, but said in a statement that it intends to remain a partner in Mr. Freed’s company through 2023. “The resorts are developing well and we look forward to continuing,” said Neha Kapelus. Vice President of Finance at Skyline.

After his first summer as new owner, Mr Freed also has new proof that one of his bets – that booming interest in the outdoor lifestyle won’t wane as the pandemic subsides – is paying off.

Horseshoe, near Barrie, Ontario, is primarily known for its downhill and cross-country skiing, but according to general manager Jonathan Reid, the crowds that turned up in the summer when international travel was extremely limited have not gone away as outside destinations country have opened up.

“Four, five years ago we sold $200,000 worth of lift tickets one summer,” Mr. Reid said last summer, mostly for mountain biking. “We were static there for probably 10 or 11 years. Last year we jumped to $850,000 and have maintained that pace this summer.” Mr. Reid said that Horseshoe’s annual revenue exceeded expectations and is on track to reach $25.5 million, which is well above the budgeted estimate of $20 million.

Having the resorts act as destinations supports the hospitality side of Mr. Freed’s business, but it also sets the table for what is ultimately the more lucrative game: selling more land as recreational properties.

“Someone like Mr. Freed knows that. He’s not just investing in these properties for operational reasons,” said William Murray, associate professor in the University of Guelph’s School of Hospitality, Food and Tourism Management. dr Murray notes that while tourist and investor demand for Ontario’s resorts will come from North America rather than overseas, the surge in travel “closer to home” in recent years has exceeded expectations.

Even after high interest rates hit property sales in late 2022, Cottage Country prices are still close to historic highs. “I think you’re going to see a lot of real estate movement in the lodging sector, values ​​have gone up and operations are coming back,” said Dr. murray

Mr. Freed’s recovery plan is beginning to bear fruit. Last summer, the company opened a sales office for a 183-unit condominium development in Horseshoe. “We sold $60 million worth of units in the first three weeks,” Mr. Freed said, with prices starting in the mid-$400,000 range. Even if the demand for new condominiums in the metropolitan areas has decreased, his company’s offer is not aimed at people who can hardly afford to buy a property.

“Less than 1 percent of people can afford a multi-million dollar home, but many people want a recreational property,” said Mr. Freed.

His manner is reassuring, even soothing, when he talks about his passions and projects, but there’s a lot of nervous energy simmering beneath the surface. Mr. Freed keeps a leather folio bursting with scrawled notes, sketches, and ideas. He often speaks of legacy, of wanting to reach some of his milestones before he turns 60.

For someone who’s built thousands of condos and managed hundreds of millions of dollars in budgets, he’s refreshingly candid about the thousands of details he has to manage for his resort vision can sometimes make him a little nervous.

“When you stop getting nervous in this business, maybe it’s time to step back and let another nervous Nelly take over,” he said with his trademark unassuming grin. “I think a lot of what we learned in the first 25 years – good and bad – we use that knowledge and that experience now in this chapter.”

Poudre Studying Middle turns into the lesson for out of doors...