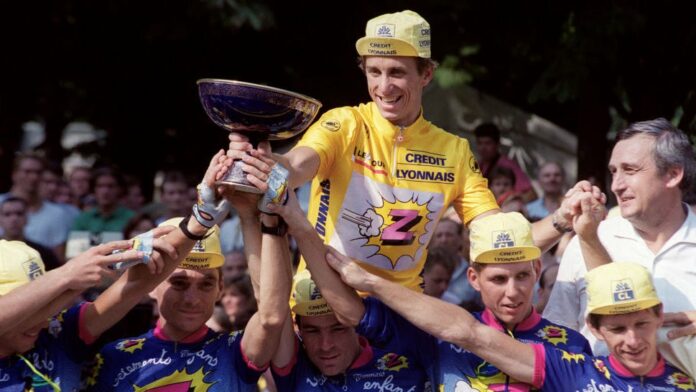 Greg LeMond, the only American man to have won the Tour de France, has been diagnosed with chronic myelogenous leukemia. The news was announced by LeMond, who is 60, on his personal website on June 2.

LeMond said the form of leukemia is treatable and not life-threatening. He will begin treatment later this week in the U.S.

“I had been experiencing a few weeks of fatigue, which prompted me to go in for a checkup, which included some blood work,” he said in a statement. “Following a series of tests and a bone marrow biopsy, which was completed last week, I received my formal diagnosis last Friday. My doctors at the University of Tennessee, with consultation from a team at the Mayo Clinic, have outlined a chemotherapy protocol, which will begin this week.”

LeMond shared his feelings around the diagnosis, explaining that along with a sense of understandable shock, there was a sense of relief coming from the fact that doctors had been able to make a quick diagnosis. He also said that if treatment goes as planned, he should be in remission within a few months.

LeMond won the Tour de France three times, first in 1986 and then in 1989 and 1990. He also won the rainbow jersey twice, in 1983 and again in 1989. He remains the most decorated male cyclist in American history and the country’s only men’s Tour champion. Lance Armstrong and Floyd Landis both won the Tour but were stripped of their titles for cheating.

Since retiring from the professional scene in 1994, LeMond has become a strong anti-doping advocate and worked for several media outlets at the Tour de France. His successful bike brand has gone from strength to strength in recent years, and in 2019, he was awarded the Congressional Gold Medal, honoring those who have performed an achievement that has an impact on American history and culture that is likely to be recognized as a major achievement in the recipient’s field long after the fact. Other notable winners include Jesse Owens and Jackie Robinson.

“No one ever wants to hear the word cancer but, admittedly, there is great relief now to know why I was feeling poorly. My doctors and I have decided on a treatment, which will begin this week,” he added.

“I should be feeling better in a few weeks, and for the near future, my daily schedule will be altered only a little, and I have been told that in a few months I should be in remission. The long-term prognosis is very favorable. I am fortunate to have a great team of doctors and the full support of my family, friends, and colleagues at LeMond Bicycles.”

In the short term, LeMond has decided to pause his plans to be at the Tour de France in July. He will instead follow the race from his home and continue to work on his LeMond Bicycles brand. The company has several projects in the mix at present, and while LeMond receives treatment, he will also support his colleagues.

“We have a great team at LeMond Bicycles who are being updated about my medical condition as we prepare this statement, and I am confident our work and plans for the near future will not be disrupted in any way,” he said.

“I will continue to participate in and support our plans for the summer months ahead. I had hoped to be in France in July for the Tour, but we are now working on an alternate plan so I can follow the Tour and engage with friends and teammates from our offices and farm in Tennessee. I will look forward to returning to the Tour next summer.

“I will keep everyone updated about my health and treatments in the months ahead, but for now, I believe I couldn’t be in better hands. I am excited about our plans ahead, and I look forward to updating you all along the way.”

This Is the Greatest Youngsters’ Water Bottle

The actual significance of Outside Adventures | Sports activities

The Harmful Himalayan Kanchenjunga Is Now Open For Climbing