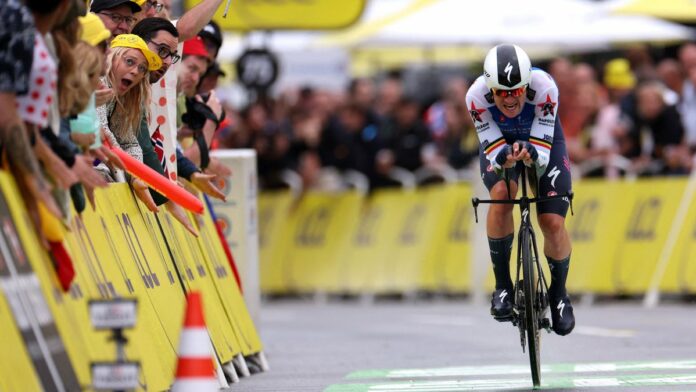 This article was originally published on Velonews.com, where you can find daily results, insights, and analysis from the 2022 Tour de France.

Yves Lampaert (Quick-Step Alpha Vinyl) overturned the applecart by going faster than the favorites and securing stage victory and the first yellow jersey of the Tour de France.

Lampaert started the day off-radar but rode the time trial of his life to go five seconds faster than countryman Wout van Aert (Jumbo-Visma) in a huge late-hour surprise in the Tour’s grand départ.

Van Aert had looked on course to take victory after starting earlier in the day than Lampert. However, the Quick-Step classics ace took advantage of drying roads after early downpours and a recent run of form to score the first major surprise of this year’s Tour.

“I beat the great rider Wout van Aert!” Lampaert joked shortly after finishing his ride. “I really don’t understand it … I thought I lost it every time in the corners.”

“My good time trials in the Baloise Tour and the Belgian championships had given me a lot of confidence, but I can’t believe this.”

Jumbo-Visma double-threat Jonas Vingegaard and Primož Roglič were next best of the GC pack after Pogačar. The two teammates finished eight and nine seconds back on the defending champion respectively.

Ineos Grenadiers’ leaders Adam Yates and Geraint Thomas were next fastest of the favorites, 16 and 18 seconds slower than Pogačar. Tom Pidcock didn’t play junior on the Ineos bus, beating both his GC teammates to finish 15th on the stage.

The massed Copenhagen crowds were rewarded with three Danish riders in the top-11 thanks to strong rides from Vingegaard, Magnus Cort, and Mads Pedersen.

The Dutchman set the first true benchmark of the day with his time of 15:30 after Swiss specialist Stefan Bissegger (EF Education EasyPost) saw his ride derailed by two crashes on rain-slicked roads worsened with slippery fan art and road markings.

Rain threw down heavy shortly before the stage and during the opening hours of the 13km Copenhagen kicker.

A course packed with 90-degree bends meant careful cornering had to be matched by big-motor revving on the straightaways.

💥 On a wet and tricky route, @aka_muni has crashed. He is back on his bike.

Roglič was first GC rider to finish as the rain reached its heaviest. The Slovenian blazed his race – and stayed upright – to end up eighth on the stage. Vingegaard started not long after Roglič and bettered his teammate’s ride to finish one place higher.

Every corner made a heart-in-mouth moment on the perilous parcours. Thomas took no risks but backed up his powerful Suisse TT to finish disappointed but within range.

“That was the worst first half of a time trial that I’ve ever done. I wanted to start fairly conservatively, power-wise, but everyone is telling you to go easy on the corners because it’s three weeks and there were crashes apparently,” he said.

Van Aert and Ganna started one after in what promised a true clash of the titans.

Van Aert went a fraction faster through the sodden front section of the course and looked at ease on the sketchy bends. The Jumb0-Visma ace finished a fraction faster than his Italian archrival and set what looked likely to be the winning time – until Lampert came along some 45 minutes later, that is.

The sun started to shine when Pogačar hit the Copenhagen streets and the Slovenian started his jersey defense on a tear. The 23-year-old rode an inch-perfect ride to the top of the GC pack.

The stage looked all done once the top GC contenders went through and Van Aert was settled into the hot seat.

However Lampaert started late in the day and continued the momentum from his recent victory in the Baloise tour TT and second in the Belgian nationals to make a raid on the yellow jersey no one had predicted.

We couldn’t stop him not even after the finish 😁@yveslampaert #TDF2022 pic.twitter.com/U63nzNsZa8

Up next: A big bad bridge

A huge series of bridges and blustering winds could play havoc in the flat 199km stage Saturday.

A crossing of the famous “Great Belt” could prove chaotic late in stage 2 thanks to the threat of crosswinds, throwing a wrench in the works of the sprinters – including Lampaert’s teammate Fabio Jakobsen.

Royal Gorge Bridge & Park to host out of doors job...

Wyoming Out of doors Recreation Collaboratives to Meet in Lander