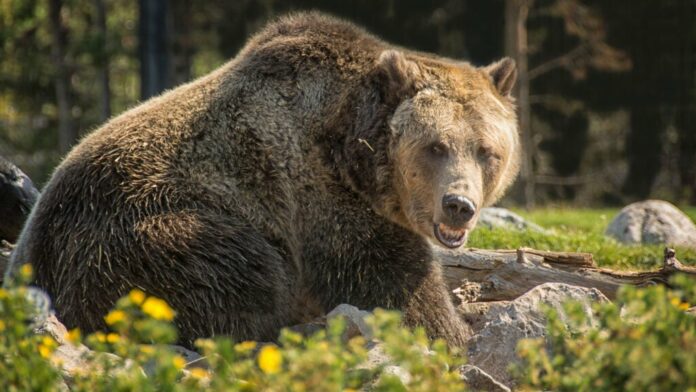 Two college wrestlers are lucky to be alive after sparring with an aggressive grizzly bear in Wyoming’s Shoshone National Forest last weekend.

Northwest College wrestling teammates Brayden Lowry and Kendell Cummings were antler hunting when the bruin came running out from the trees.

“I didn’t even see it until it was right in front of me, but I heard the crashing,” Lowry told ABC News in an exclusive interview.

The grizzly tackled Lowry first, taking him by the left arm and whipping him around. Cummings, scared that he’d lose his teammate, punched and jumped on the bear to stop the attack, it turned its attention to him. At this point, the grizzly pinned Cummings against the trees and began attacking him from that position.

“I was putting my hands in its mouth, so it wouldn’t be chewing on my neck,” Cummings told ABC News.

After the initial attack, the bear lost interest and walked away, but circled back as soon as Cummings called out to Lowry. The grizzly grabbed Cummings by the skull; even though he could hear the crunch of the animal’s teeth on his bones, he told the network that he had too much adrenaline to feel pain. After the bear lost interest again, it left, and the two students lay still until they were sure they were safe.

When Lowry and Cummings felt they could escape, Lowry called 9-11. According to a news release from the Wyoming Game and Fish Department (WGFD), this 9-11 call activated Park County Search and Rescue.

The two students were a half-mile from wrestling teammates Orrin Jackson and August Harrison, who had come out to antler hunt with them; the four are all reportedly experienced backcountry travelers. As he called 9-11, Lowry spotted Harrison and Jackson hiking down the mountain. He reunited with their teammates, and the group helped Cummings hike the 1.5 miles back to the trailhead, at points carrying him. Along the way, more people helped the injured students reach the trailhead, including WGFD personnel, a hunter in the area, and a local resident. Here, they would connect with search and rescue responders and eventually be taken to the Billings Clinic in Cody, Wyoming.

The two students had serious injuries. Cummings had to get 60 staples in his head, plastic surgery for the facial lacerations, and stitches in both his hands and legs. Lowry sustained a compound fracture in his left arm and major lacerations to his back, shoulders, and right leg and thigh.

“For us to walk out of there alive, all four of us, it’s a miracle,” Lowry told ABC News.

According to the WGFD, grizzlies have been more active than usual in the area this season, with up to 10 bears roaming between the low-elevation slopes and agricultural fields in the area. The department encouraged visitors of the South Fork and North Fork of the Shoshone River, Clark Fork, and Greybull River drainages to watch for bears.

In the WGFD news release, Cody Region Wildlife Supervisor Dan Smith said that the game and fish department would monitor local bear activity with the U.S. Fish and Wildlife Service.

Outdoors Information: Our selections matter: outside ethics | Outside

NDC cautions towards tenting of delegates