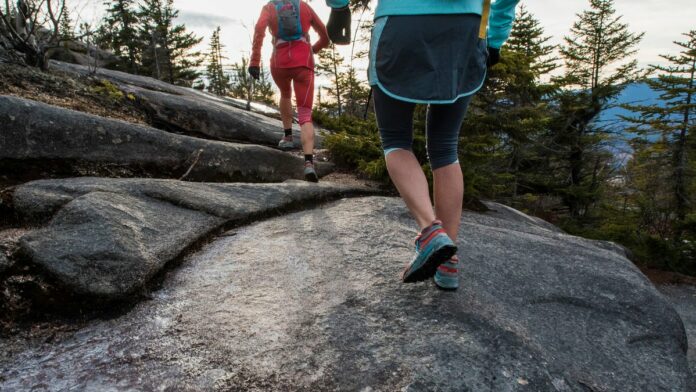 Two New England hikers have pled guilty to charges of reckless conduct, and have agreed to pay fines after rescuers had to retrieve them from an off-trail area in New Hampshire’s White Mountains earlier this year.

The hikers, a 22-year-old from Lowell, Massachusetts and a 25-year-old from Windsor, New Hampshire, will each pay a $200 fine and a $48 penalty assessment after pleading their charges down from misdemeanors to violation-level offenses in the 2nd circuit court of Littleton, New Hampshire.

On the afternoon of June 11, the pair wandered off trail in Franconia Notch State Park, and quickly became separated. Not long afterwards, one of the hikers called emergency responders and told them he was stuck underneath a ledge high on the mountainside, perilously close to a cliff. After tracking his cell phone signal, responders determined that he was located on a geologic feature known as Hounds Hump.

Officials dispatched offers from the state’s fish and game office, volunteers of the Pemigewasset Valley Search and Rescue team, and a New England K9 drone unit to the area. Rescuers were quickly able to locate the caller’s companion, who had continued ascending but had also become stuck when he failed to find a way down from the cliffs. However, after several hours of searching, they still hadn’t located the caller.

“Rescuers, who were professional guides for rock climbing, were unable to reach the location of the stranded hiker from the bottom of the cliffs, and instead were forced to climb above the hiker and descend to the area he was thought to be in,” the state Department of Fish and Game wrote in a press release. “The stranded hiker’s friend was found by rescuers, but could not lead them back to his friend’s position. Even after several hours, the hiker still had not been located because of the dangerous terrain.”

Eventually, a SAR member was able to spot the hiker from an observation point beneath the cliff. Rescuers used a drone to collect additional information about the hiker’s position, and then a responder rappeled down the cliffside to extract the hiker. The entire operation took more than seven hours.

After interviewing the victims, the department said it concluded neither of them had been prepared for the trek.

“Conservation officers learned from the two hikers they had no plan for a hike that day. They were not familiar with the area, did not stay on any trail, and did not have any equipment or even footwear for entering such a steep and dangerous location, much less ropes, harnesses, or climbing gear,” the department stated. “Both hikers were issued summonses to court for reckless conduct.”

Lt. James Kneeland of the New Hampshire Fish and Game Department’s law enforcement division added that hikers put themselves at risk, and they also placed safety personnel in harm’s way.

“The safety of rescuers is paramount in the execution of search and rescue missions,” he said. “When people put themselves into hazardous situations needlessly or by being ill prepared, and put rescuers in harm’s way, they need to be held accountable.”

In addition to facing criminal charges, hikers in New Hampshire who show up unprepared risk being stuck with the bill. The state is one of just a few places in the country that commonly charge people they deems reckless with the cost of their rescue.

Those who are in favor of charging hikers for rescue operations commonly argue that taxpayers shouldn’t have to foot the bill for the decisions of strangers. Those who are opposed to it say that hikers and climbers who genuinely need help may refuse it—or delay it until the situation worsens—out of fear of being held liable. Traditionally, organizations like the National Association for Search and Rescue have held that the state should avoid billing rescue subjects.

The bill, however, can be sizable. The National Park Service alone spends about $5 million dollars on rescue operations every year. Missions that require the use of a helicopter, or a boat commonly cost from $1,000 to $1,600 per hour. The average cost of a rescue in New Hampshire is $2,500. In 2015, a court held that one hiker, Edward Bacon, had to pay the state nearly $10,000 after he dislocated his hip during a 5-day solo hike in the state.

When it comes to consistently punishing hikers it deems reckless, New Hampshire is an outlier. Maine, Vermont, Oregon, and Hawaii all have the ability to bill rescue subjects, but generally choose not to. States like Colorado and Vermont may charge for rescues if hikers wander into areas that are closed to the public, but typically officials there refrain from charging hikers for standard rescue operations.

Between 2009 and 2019 alone, the state of New Hampshire conducted about 190 rescues per year, which cost the state about $300,000 annually; it recouped an average of roughly $180,000. Most of that came from boat, snowmobile, and OHV registrations; more funds came from the sale of voluntary Hike Safe cards for $25 per person or $35 per family, which relieve the holder from the responsibility for paying for most rescues (though the state may still charge them in cases it deems them to have acted recklessly). Of the rescues, about 32 per year were deemed negligent, and another 6 involved substance abuse. The state pursued reimbursement from the defendant in about 17–or half of the annual “negligent” cases.

Maine Out of doors Manufacturers Appoints New Board President

Regenerative Journey Is the Subsequent Section of Accountable Tourism

Andrews to move newly created Workplace of Out of doors Recreation...