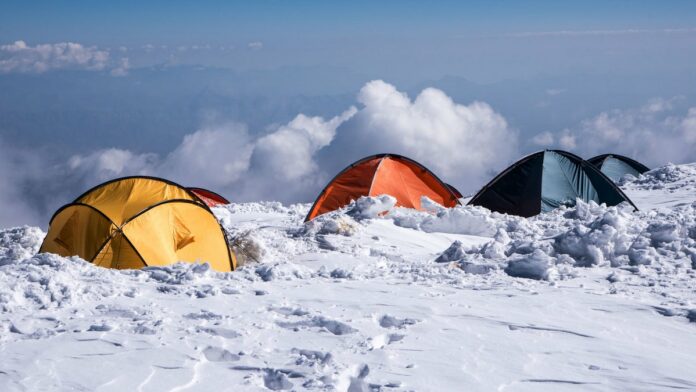 Two Russian climbers died on Kyrgyzstan’s 23,405-foot Lenin Peak on August 28. Local reports attributed their deaths to carbon monoxide poisoning, and said that the two likely used their cooking stove inside of their tent and died from inhaling the gas.

The climbers were identified as climbing guide Vyacheslav Sheiko, and his client Georgiy Veselovsky. Sheiko was an experienced mountaineer who owned his guiding service and had climbed Lenin Peak 26 times. In 2019, he placed third in the Lenin Peak Sky Marathon. Sheiko and Veselovsky were 38 and 41 years old, respectively.

Lenin Peak is the highest mountain in the Trans-Alay Range and is situated on the border between Tajikistan and Kyrgyzstan. Sheiko and Veselovsky’s tent was found at just over 19,600 feet. An investigation is ongoing.

Carbon monoxide is an odorless, tasteless gas produced by burning fuel. The heme in red blood cells has a higher affinity for carbon monoxide than oxygen, so breathing in carbon monoxide can result in oxygen deprivation to key organs. Mild symptoms include headaches, dizziness, and fatigue. Prolonged exposure can cause seizures and death.

The CDC states that you should never use fuel-burning devices, such as stoves, lanterns and heaters, within a tent. For climbers who chose to do so in high altitude scenarios, ventilation is key in mitigating risk; however, opening tent flaps can be insufficient to prevent the buildup of carbon monoxide.

Climbing reached out to Adrian Ballinger, accomplished alpinist and skier and the founder and CEO of Alpenglow Expeditions for tips on what to do if the weather turns and you need to cook inside a shelter.

“Carbon monoxide poisoning while cooking in your tent is a very real risk that I think we all deal with in the mountains,” he says. “My most recent experience with carbon monoxide poisoning was in 2019 on the north side of Everest. We arrived in Camp 4 and were setting up our camp when another team started yelling for help. We went over to [their] camp and there was a sherpa who had been cooking inside his tent. We’re not sure for how long, but he was having a seizure. The sherpa did live: we provided high-flow oxygen and worked with our expedition doctor. But of course first and foremost was getting him out of the tent and removing him from the source of the carbon monoxide.”

Ballinger recommended cooking outside or in your tent’s vestibule, with the outer door at least partially open for good ventilation. He admits: “Those best practices naturally conflict  with reality, when we have storms or high winds on the mountain.” Naturally, at that point, tired and hungry climbers tend to move their stove to the interior of their tent. Ballinger stressed this is never recommended, and with Alpenglow Expeditions, they never allow teams to do it.

“That said, if there’s a super stormy day, Alpenglow’s guides or local staff might cook inside their tent, being very very careful to stay aware of the challenges and dangers of that, and then bring hot water to our clients. So with experience, there are times where we cook inside our tents. We do it with at least half of the front door and back door open and we only do it when it’s really stormy and windy outside so we’re getting a lot of ventilation moving through the tent. Now that’s not pleasant, but it’s the only way I’ll cook inside my tent.” Ballinger says speed is key. He’ll cook inside of a tent to boil water for three to four minutes, and then the stove gets turned off. People run into trouble when they’re trying to cook something or boil snow for multiple liters of water.

“The other time I see people cooking inside their tent, or I’ve cooked inside my tent, is when I’m using a tent with no vestibule and I’m on really technical terrain,” he says. “So imagine a Black Diamond Firstlight or some other bivy tent. MSR and other companies still make hanging kits for your stoves where you can actually hang them inside your tent. And on really technical alpine [climbs], that’s still kind of standard. But once again I only use a hanging kit with the front and back door significantly open, I minimize the number of minutes I cook, and I make sure myself and my partner are checking in with each other. That we’re not starting to experience symptoms of carbon monoxide poisoning, things like confusion, tiredness, headaches, things like that. So we’re going to stay awake, we’re going to be sitting up, we’re going to do it very consciously for a few minutes, and then we’re going to shut that stove down.”

Ballinger offered up one more thought: carbon monoxide detectors can be super lightweight, and it might not be the worst idea to incorporate them into your kit, especially if you foresee dealing with challenging weather.

High 10 Out of doors Adventures In The U.S. This Fall

Metropolis of Lubbock Parks and Recreation Dept. occasions for August 20-26...