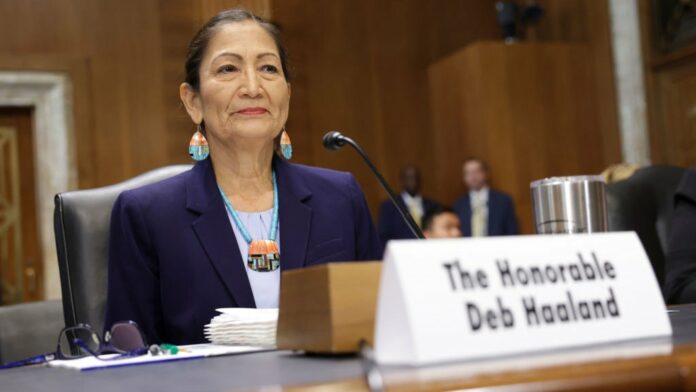 The U.S. government has completed its removal of the word “squaw” from the names of hundreds of mountains, lakes, and valleys that sit on federal land. The process began last November, when U.S. Interior Secretary Deb Haaland officially declared the term derogatory, and ordered the agency to scrub its use from all federal landmarks and places.

The word, which is a slur used against Native American women, was used on hundreds of landmarks. On Thursday, the Department of the Interior released new names for 643 locations across the country. The majority of the landmarks are in the West, according to an interactive map from the U.S. Geological Survey.

“I feel a deep obligation to use my platform to ensure that our public lands and waters are accessible and welcoming,” Haaland, the first Native American to lead a cabinet agency, said in a statement. “That starts with removing racist and derogatory names that have graced federal locations for far too long.”

While scholars disagree on the etymology of the word “sq–”, it appears to be one of several Eastern Algonquian words that English and French settlers appropriated in the early 1600’s. Historical documents show white colonists commonly used the word to derisively refer to Indigenous women, employing racist and sexist stereotypes.

In a statement last November, Haaland said Secretarial Order 3404 marked “a significant step in honoring the ancestors who have stewarded our lands since time immemorial.”

Changing offensive place names on public lands is not without precedent. The Board on Geographic names, which was established in 1890, has previously removed pejorative terms for Black and Japanese Americans from federal use.

“I am grateful to the members of the Derogatory Geographic Names Task Force and the Board on Geographic Names for their efforts to prioritize this important work,” Haaland said yesterday. “Together, we are showing why representation matters and charting a path for an inclusive America.”

Pamplin Media Group – Wyden: Outside recreation doesnâ€™t want all that...