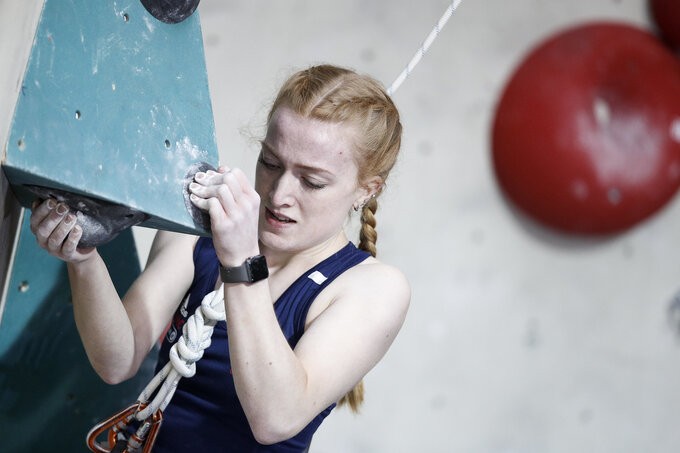 After the 2020 World Cups were cancelled due to COVID-19, the team headed out to Moscow for the first international competition since the Briançon World Championships in 2019, excited to reap the rewards of the past two years’ training and test themselves against the world standard in paraclimbing.

Qualifiers took place across two days on a set of exciting, varied routes at the CSKA arena. The routesetters rose to the challenge of setting modern, competition-style routes that suited the requirements of the different types of disability that athletes in each sport class climb with. The standard of setting for paraclimbing competitions gets higher every year and this competition was no different, with dynamic, powerful, and technically complex routes for each of the sport classes.

The team had a successful first day, with Jesse Dufton (B1), Abbie Robinson (B2), Richard Slocock (B2), Lux Losey Sail (B3), and Laurence Morgan (RP1) all competing on Wednesday. Jesse, Abbie and Rich got the competition off to an exciting start, each securing the only top in their sport class on their second routes, and heading into finals in first place. Lux cruised his first route, and fell high on his second securing third place in B3, but missed out on a final due to his category being short of competitors – a symptom of the ongoing pandemic. Laurence drew cheers from the crowd as he put in a tenacious effort, securing 7th place at his first IFSC competition.

Day two saw continued success with athletes in the RP, AU and AL sport classes securing spots in the final. In AU2, Matt Phillips climbed smoothly and confidently into his spot in finals, and James Rudge put in a valiant effort, finishing in eighth place. Stuart Sneddon (AL2) looked incredibly strong on the tough qualifier routes, but a close set of performances meant he was just points away from making the final.

The women’s RP3 sport class had a strong GB contingent this year after reclassifications against new rules, with Martha Evans, Joanna Newton and Anita Aggarwal all battling it out on two contrasting routes. Martha qualified for finals in second place, with Anita and Jo just missing out on finals. In the merged woman’s RP2 and AU2 category, I (Lea Volpe) secured my place in finals with a comfortable top on route 1 and an unfortunate slip on the dyno for route two, while Bella Walsh fought hard on reachy moves and finished up in joint 6th place.

Reflecting on her experience, Bella said: “After the past couple of years, I was so psyched to finally be competing again, even when I realised that I’d be competing in a merged category due to low numbers in my own category. Of course I was gutted not to make finals, and felt like I could have given more on both of my qualifier routes, but I enjoyed every second of being back in an international competition environment and I’m so psyched to hopefully have a much more full competition schedule again next year!”

After a standout performance in qualifiers, and six athletes through to finals, the team headed to the Moscow Palace of Gymnastics on Friday evening to battle it out for podium places on the main lead wall.

First out was Jesse Dufton in B1. Working with his sight-guide, Molly, he climbed smoothly and methodically through the sustained first section of his final route. The previous climbers had set the tone for a strong round with Aita Sho of Japan topping the route, but despite an error low down Jesse held his own and secured the bronze medal. Next, Richard Slocock, B2, climbed comfortably through the pumpy steep sections, but fell at a tough gaston crimp just before the headwall, securing second place and the silver medal.

Describing his experience, Rich said: “The 2021 World Championships was a great event, after a tense run up. Although I had hoped to take gold in the B2 category, the silver medal is still a great result. The final was amazing and the wall was incredible, and this mixed with an incredibly supportive and close GB team made for a fantastic trip.”

Abbie Robinson set out next to defend her world champion title on a technical, crimpy route. The route proved no match for her despite a recent finger injury, and she topped the route comfortably for the win, remaining undefeated for another year.

In the RP sport classes, Lea Volpe was set for a close battle with French athlete and AU2 world champion Solenne Piret. After climbing smoothly through the first two thirds of the route, she reached the high point before coming off at the powerful crux, with Solenne advancing two moves further securing gold, and Lea taking silver. Martha was the next athlete to put in an impressive performance in the RP3 final, cruising the first half of the route at a confident pace before an unexpected slip, but securing the team’s third silver medal of the night.

Matt Phillips was next out on a burly, complex route. After a tough qualifying round, Matt put in his usual strong performance to reach the high point of the night in an incredible feat of endurance. With just two athletes left to come out, it was bound to be close but both climbers fell before the headwall and Matt was the second GB athlete of the night to take the top spot on the podium for the third World Championships running.

Six medals for six finalists is testament to the hard work the team has put in over the past two years, and the progress that’s been made in the standard of UK paraclimbing thanks to the efforts of many to develop the sport.

Reflecting on the competition, Abbie said: “It was great to be back competing again with the atmosphere of an international comp. One thing that always strikes me about paraclimbing is the level of support all athletes have for other teams and fellow competitors and it was great to be back amongst that after so long. I really hope that showcasing the standard of paraclimbing on a stage like this will help the sport grow further.”

“I found classifications really challenging at times. Especially with the additional climbing session and then qualification scrutiny, although I now understand more about why it was handled that way. It was amazing to be part of the qualifications and finals, especially at that finals venue. There were some amazing moments.

“I’d say the biggest thing for me though was the conversations we had, building the relationships and understanding how people arrive at a Paraclimbing World Championships. This definitely felt the most impactful for me as a coach.”

Stone-Manning Will Protect America’s Outside Heritage

Instances of COVID-19 climbing in youngsters below 18

Bryan Rogala’s New Journey Rig Will get Its Shut-Up