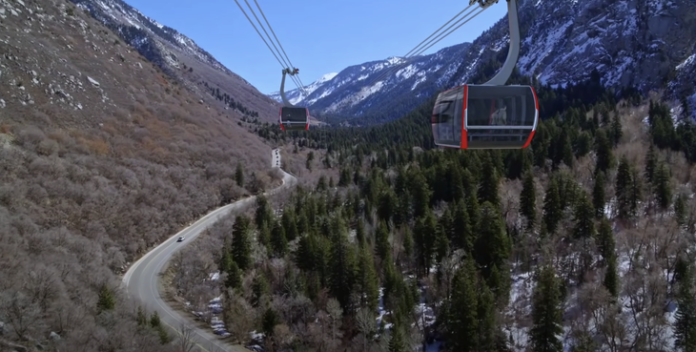 We don’t often hear about the intersection between skiing and religion, so when the Catholic Diocese of Salt Lake City came out in opposition to the proposed Little Cottonwood Canyon gondola, we were curious.

Last week the Diocese, which is the hub for the state’s 300,000 Catholics, urged its members to oppose the gondola. The project, which was recommended by the Utah Department of Transportation last month and is currently in a 45-day comment period, was found to be the most efficient option to reduce traffic on State Route 215, which accesses Alta Ski Area and Snowbird Resort. The gondola could cost up to a half-billion dollars in taxpayer money.

In an email sent to Catholics throughout the state, the Diocese took that stance that the gondola benefits a relative few who already have the means to ski, and that taxpayer money should be used to improve the lives of the state’s most vulnerable, to bolster things like low-income housing, food insecurity, and other quality-of-life issues.

“Using that kind of state funding, for an option that will not benefit anyone who is low income, seems like a pretty poor use of taxpayer funds to us,” Jean Hill, the director of the Catholic Diocese’s Office of Life, Justice & Peace, told Utah news station FOX 13 last week.

Hill asked that people sound off against the gondola during the comment period, which closes on Oct. 17. “We believe all public policy should be judged by how it impacts the most vulnerable,” she said. “This one does horrible things for the most vulnerable, because it does absolutely nothing for them. It’s a substantial amount of funding going to something that’s really only going to benefit people who can already afford to ski, first of all, and can only afford this transportation option.”

Hot Take: Utah and Colorado Have the World’s Worst Ski Traffic, But I Know How to Fix It.

The proposed gondola would carry passengers from the mouth of the canyon to stations at the base areas of Alta and Snowbird. Each cabin is slated to carry 32 passengers and arrive every two minutes. A 2,500-car lot will provide parking for those making use of the gondola. Other transportation alternatives considered were buses, a train, and widening the narrow canyon road. Utah’s Department of Transportation chose the gondola because it was the most reliable public transit in bad weather and had the least environmental impact.

The obvious question here is, if Alta and Snowbird are the main beneficiaries of this massive project, shouldn’t they have some responsibility to pay for it? Activist group Friends of Little Cottonwood Canyon thinks so, and has been opposed to the gondola for years, well before it was recommended by UDOT.

“Private businesses such as Snowbird and Alta should not expect taxpayers to foot the $600 million dollar bill for an outsized system that will only serve a very narrow segment of the population,” Friends of LCC wrote explaining their opposition to the project. “The gondola is not a mass transit solution—it’s a tourist attraction paid for by Utah taxpayers.”

Friends of LCC also argues that the fragile watershed in the canyon will be disrupted by the gondola construction, and that bringing even more people into the already overcrowded area will further compromise its longevity. “There is a proper ‘carrying capacity,’” said Friends of LCC, “one that allows us to enjoy the canyon without destroying the canyon ecology or adversely impacting local communities. We must, as a community, thoughtfully decide that capacity.”

It’s worth noting that the entity behind the gondola project, Gondola Works, comprises a host of ski industry folks, including people from Ski Utah, Powdr Corp, Alta, Snowbird, and more, some of whom obviously stand to benefit from the gondola being built. On the flip side, the resorts are willing to offer up some of their land as part of the deal. Dave Fields, who is Snowbird’s COO and GM, said the resort will put some of its private land, including 11,045-foot Mt. Superior, into easement, forever sparing it from future expansion.

It’s a complicated issue, no doubt, with the question of who should benefit from taxpayer funds at the heart of it all. It will be interesting, and precedent-setting, to see how it all shakes out over the next several years. If you want to get involved on either side of the matter, or just want to learn more about it, Wasatch Backcountry Alliance is a good resource. On the pro-gondola side of the matter, Gondola Werks lays out their case for the construction, including a video simulation of the finished product, here.

A Mountain-Bike Tour Guided by Golden Solar and Firelight