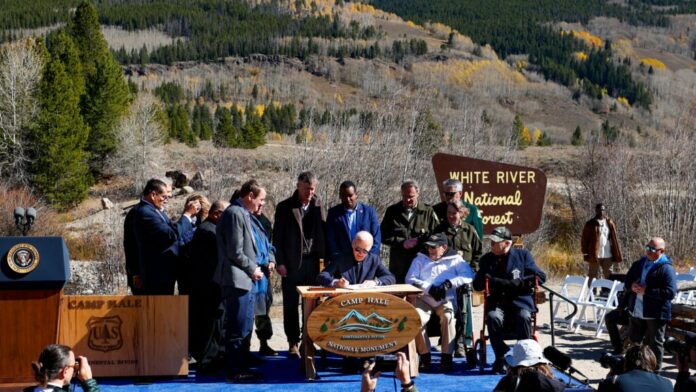 In a news release Wednesday, tribal leaders called the decision “an act of genocide to attempt to erase the history and connection of the tribe to these lands.”

“These new monuments are an abomination and demonstrate manifest disregard and disrespect of the Ute Indian Tribe’s treaty rights and sovereign status as a federally recognized Indian Tribe,” said Shaun Chapoose, chairman of the tribe’s business committee and an Uncompahgre Band member.

Biden used his authority under the Antiquities Act to designate the new 53,804-acre monument, which includes Camp Hale, a former Army base where the 10th Mountain Division trained to fight in World War II. It is located within the homelands of the tribe’s Uncompahgre Band, who were forced out of the area by the U.S. in 1880.

The Ute Indian Tribe is one of three Ute Nation tribes in the western U.S. with ancestral ties to the land. Both the Southern Ute and Ute Mountain Ute have spoken in favor of the monument and attended the proclamation ceremony on Wednesday.

Chapoose told the Associated Press that the White House only called his tribe about a potential monument at Camp Hale a week ago.

“What frustrated us is that they didn’t want us there to comment, they wanted us there for the photo opp,” Chapoose told the AP, adding that he was invited to the event, but left out of frustration. “I don’t expect them to roll out a red carpet, but I expect a little common courtesy. If I’m just going to be one of the Indians that you want to photograph, I’m the wrong Indian to call.”

A senior Biden administration official, who spoke on condition of anonymity, told the AP that officials met with each Ute tribe about the monument, and that the tribes all expressed support for it.

During his remarks on Wednesday, Biden mostly spoke of the site’s historic significance to the U.S. military, but also acknowledged the Ute tribe’s connection to the land.

“I’m also honored to be joined by several tribal leaders here, because this is your progeny, this magnificent land,” Biden said. “These treasured lands tell the story of America. For thousands of years, tribal nations have been stewards of this sacred land, hunting game, foraging for medicinal plants, and maintaining a deep, spiritual bond with the land itself.”

In their statement earlier this week, the Ute Indian Tribe reiterated their opinion that the U.S. should adopt a tribal consultation standard of free, prior, and informed consent. According to a 2021 White House report, many Indigenous leaders have criticized the current consultation process as a “box-checking exercise” that leaves tribes in the dark.

“The White House and the Administration have refused to recognize and uphold this international law principle as other developed nations with large Indigenous populations, such as Canada, have sought to do,” Ute Indian Tribe leaders said in a statement. “Failing to abide by this international standard casts a cloud on the United States and diminishes its standing among the world’s governments.”

I Can’t Wait to Chaotically Pack Once more

How At-Danger Youth Are Constructing Emotional Intelligence By Climbing

Climbing Canine Mountain: After My Divorce, A Grueling Hike Turned The...