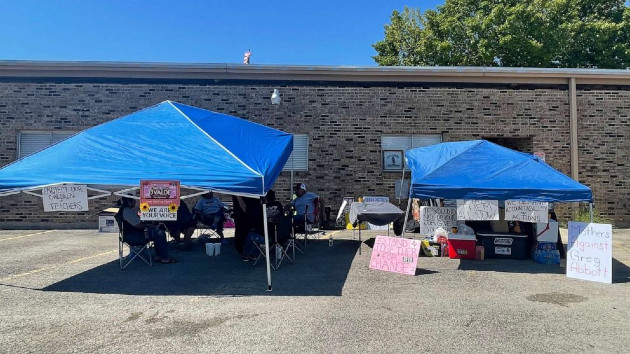 (UVALDE, Texas) — The Uvalde School District Superintendent Thursday met with the guardian of a student killed in the mass shooting at Robb Elementary School after family members of victims and their supporters spent nearly two days outside the district administration building had camped.

Brett and Nikki Cross, legal guardians of 10-year-old Uziyah Garcia, arrived at the school district office at 7 a.m. Tuesday and have not left since.

“We gave them 18 weeks to do something, so now we’re not begging — we’re demanding,” Brett Cross told ABC News earlier in the week. “I’m not leaving until they’re done with that.”

The Crosses and other families who have joined the protest throughout the week want police officers from the Uvalde Consolidated Independent School District who were present at the shooting to be blamed for their actions and alleged inaction on 24 adults were killed.

Superintendent Hal Harrell met with Brett Cross in his office Thursday morning after protesting at the property for nearly 48 hours.

Harrell offered to meet with the Crosses privately on Tuesday, but they declined, citing they wanted to meet in a public setting.

The Crosses claim they have been trying to set up a meeting with Harrell since July.

“It’s kind of embarrassing that it’s taken this long,” said Brett Cross when he finally sat down with Harrell and streamed live on Twitter Thursday morning. “You are not transparent.”

When asked why UCISD officers who were present at Robb Elementary were not suspended, Harrell said, “We’re conducting an investigation, but I need those officers [for campus patrol].”

“My son is dead because of the failure of your school district, the city, and all the police officers involved,” Cross replied. “They all failed.”

“It didn’t live up to my expectations,” Harrell Cross said on the livestream. “There were failures that day, absolutely there were.”

Uvalde’s parents accuse officers of misleading families on the day of the shooting in an apparent attempt at crowd control.

“We had [officers] lies to us “Nobody’s shooting, everyone’s fine, trust us, we have kids,” Angel Garza, stepfather of victim 9-year-old Amerie Jo Garza, told the Congressional Children’s Caucus recently.

Several fathers, including Cross, said they were physically restrained by officers and even handcuffed to prevent them from running to the school to rescue their children.

“I could hear gunshots and screams from inside, our babies screaming,” Javier Cazares, father of 10-year-old victim Jacklyn Cazares, who was protesting outside with the crosses, told ABC News. “Everyone who was there that day could hear it.”

The school district hired JPPI Investigations, a private investigative firm, to conduct an independent review of UCISD police actions on May 24, according to UCISD spokeswoman Anne Marie Espinoza.

“At this time, we do not have an estimated completion date for the reviews,” she said in an emailed statement to ABC News.

Former UCISD Police Commissioner Pete Arredondo was fired in August and has threatened legal action against the school board, describing his resignation in a statement from his attorney as “illegal and unconstitutional public lynching.”

Arredondo was the only UCISD officer to be fired or suspended after the shooting.

The Crosses and several other victims’ families, along with a growing crowd of supporters, said they will continue to camp at the administration building.

“I’m not leaving until these officers are suspended,” Brett Cross told ABC News.

Discover, join, and uncover with Asheville Parks & Recreation this fall

How Alex Honnold Climbed El Capitan With No Rope

Proposed lottery recreation could possibly be good for out of doors...