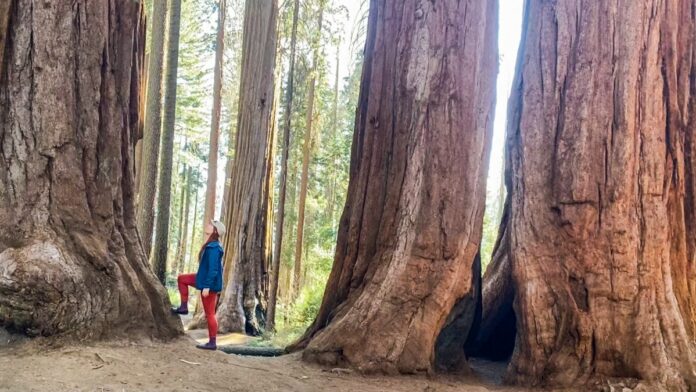 63 Parks Traveler started with a simple goal: to visit every U.S. national park. Avid backpacker and public-lands nerd Emily Pennington saved up, built out a tiny van to travel and live in, and hit the road, practicing COVID-19 best safety protocols along the way. The parks as we know them are rapidly changing, and she wanted to see them before it’s too late. Sequoia is her 58th park visit.

Sequoia National Park is my first love. It was the genesis for my yearlong journey across America’s public lands. My kindling park. Returning to it after nearly 11 months on the road felt like a homecoming of sorts, and though I was strung out and anxious from too many hours of driving solo through central California, passing almond orchards and highway haze, I knew that this park would give me a warm welcome, despite the fact that I was visiting in December.

Although I’d been to the popular park dozens of times before, at the end of 2020 there was a peace to it that I wanted desperately to inhabit. This was the first time I’d greeted its famous skyscraper-size trees during the winter. A thin film of ice clung to the Big Trees Trail as I laced up my boots and carefully set off. My low-season sojourn was an excuse to do the one thing I loved most: forest bathing sans crowds. I needed to blow off some steam.

I hung a right from the Giant Forest Museum and instantly found myself among the enormous conifers, craning my neck in awe of their waist-thick branches hundreds of feet above. I took deep breaths and tried to center myself. These trees, which could live to be over 3,000 years old, seemed to have a quiet wisdom to them. They’ve survived countless forest fires (since my visit, the 2021 KNP Complex has resulted in trail closures on the western side of the park) and western expansion. They are considered the tribal homelands of the Mono, Paiute, Yokuts, Tübatulabal, and Western Shoshone.

Arms outstretched, I grazed a patch of fuzzy, red-orange sequoia bark with my fingertips, the tree seeming almost animate in its size and complexion. I was envious of its stalwart demeanor, its ability to weather difficult storms with grace. If I could only absorb some of that perspective through osmosis, I thought to myself, maybe I could finally be at ease with my own anxieties. Eventually, I abandoned the forest for a short trek up Moro Rock.

The Great Western Divide was awash in a glow of coral and oxblood as I walked, and I watched a blue-black raven hop from stone to stone near the summit of the enormous granite dome. Away from the shady canopy of the woods, the whole of the Sierra Nevada opened up, and I could make out a handful of glistening 13,000-foot peaks across the wild landscape.

I felt the expansiveness of the space filling me, just as it had on my first visit 15 years prior. Like shining a flashlight onto the penumbra of my thoughts, I realized that revisiting a longtime favorite park can be like stepping back into the past to give your inner child a much needed hug. To soothe whatever maladies have befallen you. Every national park is an opportunity to come home to yourself.

When to Go: The park is divided into several distinct areas, each with different average temperatures due to differences in elevation. The Giant Forest and Lodgepole sections are the most popular, and summer (44 to 76 degrees) is the best time to drive up and see the tall trees and alpine meadows in person. Fall (31 to 71 degrees) brings fewer visitors, while spring (26 to 58 degrees) might have lingering snow. The main road, Generals Highway, into the park is plowed but closes intermittently during winter (24 to 44 degrees) due to blizzards.

Where to Stay: For breezy summer temperatures and the crisp mountain air so many of us crave, there’s no better park campground than Lodgepole, set on the Marble Fork of the Kaweah River; it features picnic tables, fire rings, bear boxes, and flush toilets. There’s also a camp store with showers and laundry within walking distance. Craving more creature comforts? The Wuksachi Lodge is Sequoia’s signature hotel, complete with a picturesque restaurant, private baths, and central heating.

Mini Adventure: Visit the world’s largest tree by volume. General Sherman is 275 feet tall and more than 36 feet wide at its base. It’s situated at the end of a half-mile trail in the Giant Forest section of the park. After snapping a few pictures, consider extending your day hike along the three-mile Congress Trail to marvel at even more of these colossal conifers.

Mega Adventure: Backpack the Lakes Trail. One of the most spellbinding qualities of Sequoia National Park is its immense network of backcountry trails, and fit hikers looking to escape the masses and explore the Great Western Divide won’t regret spending a few extra days taking the scenic route. This 6.5-mile (one way) trek traverses a series of breathtaking alpine lakes, framed by the imposing granite cirques that make the High Sierra so memorable.

11 Dec is #InternationalMountainDay & as vacationer sector seeks to deal...

The Greatest Journey Packs for the Stressed Adventurer