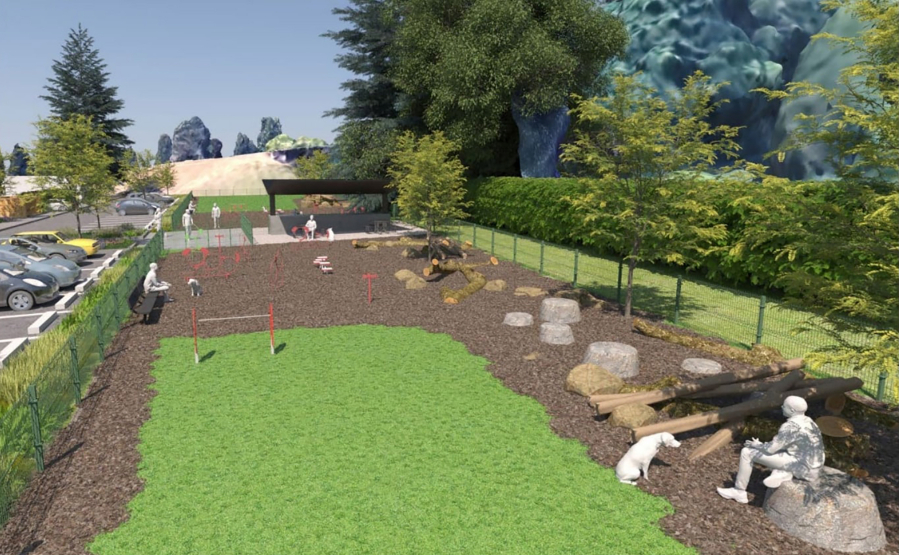 Washougal City officials have unveiled a plan to bring several popular amenities, including a dog park, to downtown Washougal.

The city leadership hopes to convert a small, vacant field just north of the Washougal Community Center into an off-leash dog park, divided into two areas that can accommodate small and large dogs, with a shelter, water fountain and seating area.

“There will be an entrance that will be partitioned off and allow large dogs to go on one side and smaller dogs to go on the other side,” Wright said. “We also have a nature playground and an obstacle course. It was suggested that allowing dogs to roam throughout the facility is really important.”

According to Wright, city officials also want to build an outdoor seating area next to the Washougal Senior Center, an amenity that could include a covered outdoor kitchen, grills, seating, a bocce ball court and a water feature.

“We met with the seniors, meals on wheels, the park board, council members and community members to find out what they would like for an outdoor recreation area,” Wright said.

Next on the list of desired city amenities is the creation of a small park adjacent to the current Washougal Community Library that would provide a splashback, local artwork, outdoor seating, a planting area and a playground.

“We’ve heard that (people) want nature-themed areas, art installations and outdoor seating with shelters. The library wall is currently blank, but the Washougal Arts and Culture Alliance has been in discussion about putting up a mural of the canyon,” Wright said.

“Not only does it add a few things that our citizens have been asking for, it makes our downtown area a little more walkable,” Ramos said. “It’s going to draw people into the stores, and potential future businesses will want to take a seat because they’re seeing some downtown life again.

“With a few banners, lighting and maybe some sidewalk repairs, I think this can draw a lot of attention to our downtown area and complement what’s happening along the waterfront.”

Scott said the city isn’t yet sure how much the project will cost, but will make every effort to secure financing options that may become available in the coming months.

He also said the city could use some of its pandemic recovery funds for the complex. The city received about $2.25 million from the US government’s American Rescue Plan Act of 2021 and expects to receive an additional $2.25 million this summer.

The council also approved an April 25 resolution allowing the city to seek a grant from the Washington State Recreation Conservation Office that would help fund the recreation complex, which will be near the Washougal Community Center and the future site of the new Washougal Library Building downtown.

The city plans to build 110 downtown parking spaces to service the new library and “meet the demand for downtown parking for events and the expected growth of the downtown area,” David Scott, Washougal’s city manager, told in January post record. The parking lots will not be part of the city’s RCO grant, Wright told city council members April 25.

Council members supported the project, although council member David Stuebe expressed concern that the amenities could attract the attention of graffiti artists.

“It’s looking great,” Councilor Michelle Wagner said. “I had questioned the size of the water park considering the weather here, but I checked it out again and saw all the rocks and it looks like it could have a double use with kids on it climb when it’s not summer. So I like that aspect of it if you’re able to bring that into the design. Children like rocks and can climb on them all year round whether the water playground is in use or not.”

Visit cityofwashougal.us/CivicRecComplexSupport to view conceptual designs and complete a support letter for the city to use in grant applications.

Vista Out of doors Agrees to Purchase Fox Racing for $540M

Fastpacking 101: What You Want for This Working-Backpacking Hybrid

Big Development of Out of doors Leisure Market 2021

GAME OVER: McCleerey’s Sporting Items is ending its 50-year run –...