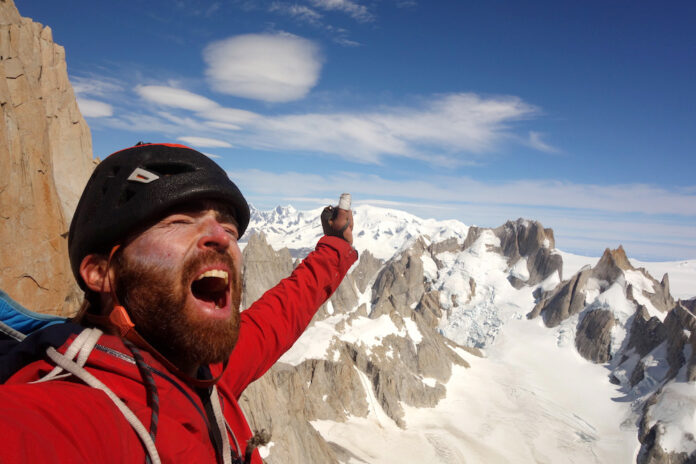 The 2022 Piolets d’Or awards for alpinism was be celebrated last Saturday at Briançon in France and awarded to Sean Villanueva O’Driscoll of Belgium for his Moonwalk Traverse of the Fitz Roy Group in Patagonia, and to Archil Badriashvili, Baqar Gelashvili and Giorgi Tepnadze from Georgia for the first ascent of the NW Face of Saraghrar Northwest in Pakistan. Nikita Balabanov, Mikail Fomin and Viacheslav Polezhaiko from the Ukraine receiver a Special Jury Award for the first ascent of the southeast ridge of Annapurna III (7,555m), while Slovenia’s Silvo Karo was honoured with Piolet d’Or Lifetime Achievement Award 2022.

Over five days in February 2014, Americans Tommy Caldwell and Alex Honnold pulled off an astonishing and much-coveted ridge traverse when they crossed the entire Fitz Roy Group from north to south – Aguja Guillaumet to Aguja de l’S. In 2015 the Fitz Traverse was awarded a Piolet d’Or.

In early 2020, stuck in El Chaltén after the start of the pandemic and with seemingly many more cases and restrictions in Europe, the Belgian Sean Villanueva O’Driscoll decided to stay, locked into this giant playground. By early February 2021, he was ready to embark on a dream: to traverse the entire Fitz Roy Massif, solo, from south to north. The project, over five kilometres in length and with more than 4,000m of total elevation gain, would follow the skyline from Aguja de l‘S, over Aguja de Saint Exupéry, Aguja Rafael Juárez, Aguja Poincenot, Aguja Kakito, Cerro Fitz Roy, Aguja Val Biois, Aguja Mermoz, Aguja Guillaumet Sur, and finally Aguja Guillaumet.

On the first day, the single lead rope he was using sustained three core shots and only just lasted to the end of the traverse. Not much later he lost cams when a gear loop broke. He climbed free, mostly on-sight, and self-belayed with a Grigri on all but the easiest (scrambling) pitches, resulting in him covering most of the ground three times. He carried no communication device and due to the quiet nature of the mountains at that time, met only three other teams. Prolific Patagonian activist, Colin Haley, felt it was undoubtedly the most impressive solo ascent ever made in this region.

The Jury felt this was an elegant and sustained line, which had been attempted or conceived by several parties, although no one appears to have considered it for a solo outing – an adventure unattainable for most climbers. Whilst, apart from a few pitches, none of the terrain was new, the style was outstanding, combining technical climbing, endurance, mental commitment, and considerable Patagonia experience. There was admiration for the optimistic attitude, at first when the country was brought into lockdown and then on the initial stages of the route, when faced with gear damage and loss.

Vandals Strike One among Yosemite’s Most Widespread Trails

Annual park passes are your ticket to Northwest out of doors...

Startup Shaped at JBU Chosen for the Greenhouse Outside Recreation Program...

Ought to Gateway Arch Be a Nationwide Park?