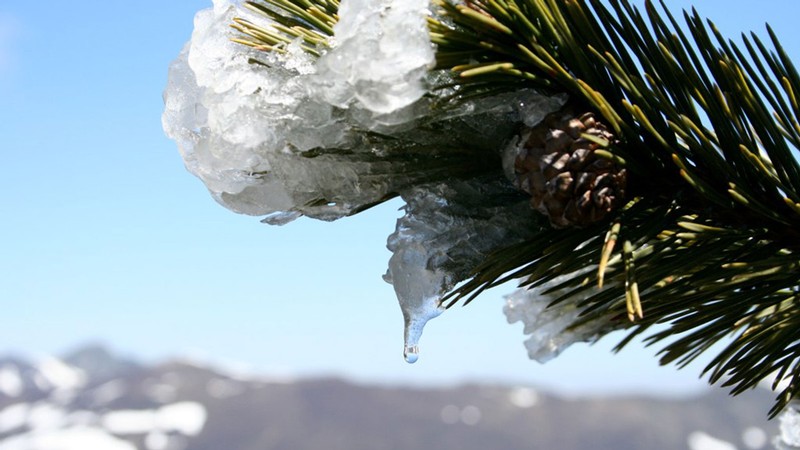 Editor’s Note: This is the third in a three-part series exploring data findings from the Utah Wellbeing Project, which tracks community wellbeing statewide.

Above-average temperatures and below-average rainfall have been the norm throughout Utah for two long decades. The snow cover, which is important for the water supply in summer, melts away in March. Huge swathes of the lake bed around the Great Salt Lake are now cracked and blown away by the wind. Perhaps it should come as no surprise that water security is at the top of Utahns’ list of concerns for 2022, according to the Utah Wellbeing Survey.

And like the rising “bathtub ring” around Lake Powell, those numbers have increased dramatically over the past year or two, said Courtney Flint, director of the Utah Wellbeing Project at Quinney College of Natural Resources. For the cities that participated in the survey over two years (2021-22), concerns about Utah’s water supply rose — sharply, for some. In Saratoga Springs, the percentage of respondents concerned about the water supply increased from 60% to 88% of respondents in just one year. Hyde Park went from 68% to 95%.

“People in the state have definitely had their eye on this particular issue,” Flint said. “They are noticing how the water supply is affecting or could affect their lives and communities.”

Providing water is a challenge for cities across the state, but this moment could also be an opportunity, she said.

“It may be the best time for city and state leaders to highlight water as a key issue and to grab people’s attention where this type of energy is needed for change.”

The well-being of Utahns appears to be uniquely linked to our shared natural resources, Flint said. The majority of high-level concerns reported at the survey center related to the Utah area, both distant and close to home. Eight of the top ten concerns listed by residents involved Utah’s land, water, or air. People in communities in Utah reported that mountains, rivers and streams, city parks, hiking trails, lakes, farmland, and red rocks had the most positive impact on their well-being. Outdoor recreation and participation in nature activities were strongly correlated with higher well-being scores.

But more than just a source of entertainment, outdoor activities seem to affect other aspects of life in Utah — how people interact with their community. Things like recreation on public lands (both motorized and non-motorized), enjoying local wildlife, using city parks, participating in city programs, and gardening have all been positively associated with community connection.

“Whether remote and rural or highly urban, residents of Utah’s towns and communities are very attuned to the natural resources on which they depend,” Flint said. “This data should serve as a call to action across the state.”

The Utah Wellbeing Survey project was designed to assess the wellbeing and local perspectives of city dwellers and provide city leaders with information to aid in their overall planning processes. As of early 2022, 33 cities with a total of 9,947 completed surveys participated in the survey. The survey questions include assessing the importance of 10 different areas or categories of well-being, participation in recreational and nature-related activities, perspectives on local population growth and economic development, the impact of landscape features on well-being, concerns for the future and much more of demographic characteristic questions.

For more results and details on your city’s wellbeing, visit the Utah Wellbeing Project website.

Why Is The Outside Retailer Present Returning To Utah?

Rapids undergo bodily 2-1 loss to Sporting Kansas Metropolis on the...

Learn how to Go to the Wildest Nationwide Park within the...