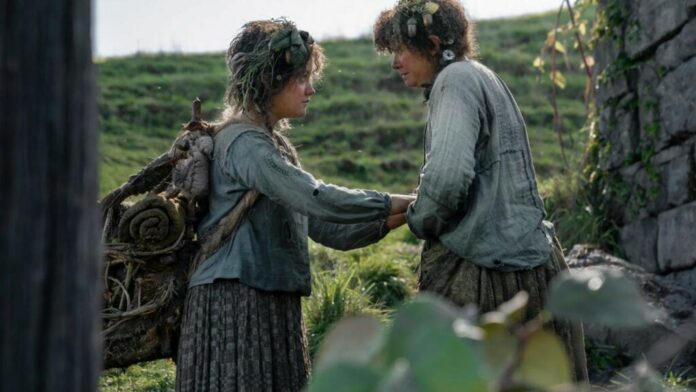 A lot of people are watching Rings of Power—like 25 million for the first episode alone. Now that the cinematic first season has concluded, we thought it would be a good time to give a brief PSA about proper equipment use in Middle Earth. TL;DR: Don’t do what Galadriel does. I can’t tell you how many times this season I yelled, in vain, at my screen: “Cotton kills!” or “Rock! Say Rock!” It might seem like an unroped ascent of a frozen waterfall in metal armor with only an elvish dagger as your ice tool is the best possible way to conquer your demons (metaphorical or literal), but we’ve got a few notes for our Tolkenian outdoors people.

Spoiler Alert: Plot details and major reveals from Rings of Power below!

In episode one, “A Shadow of the Past,” Galadriel leads a party of elves into The Northernmost Waste in her millennia-long hunt for the big baddie, Sauron. The approach to Sauron’s frigid lair involves a ropeless, vertical ice climb up the frozen sides of a waterfall that looks at least as tall as Victoria Falls in Zimbabwe. Luckily, it seems, elvish engineers have successfully designed a real-world-looking ice axe, adze, pick, and all. For footwear, Galadriel’s crew is rocking pointy, medieval sabatons which seem to offer frighteningly little purchase with just one contact point to the ice. Galadriel, who loves doing shit the hard way, is using her dead brother’s dagger in lieu of an ice axe and dynoing straight up the frozen waterfall like a beast. Clothing choice in what appears to be below-zero weather is the low point here: they are all clad in metal armor, which is likely heavy, restrictive, and cold-conducting. No helmets for this free-soloing team of ice climbers, either. Maybe loyal Thondir, who narrowly avoids being decapitated by a massive ice chunk, will invent them in the future.

Score: C. For a group of ancient hunters, pointed boots and real ice axes aren’t the worst setup. As for the heavy armor and lack of insulation? If the elves can forge weightless chainmail and weave an invisibility cloak, an expedition-style cape and flexible armor seems doable.

When Galadriel makes her very last-minute decision not to go to the Undying Lands (AKA Elven paradise), she jumps out of a moving boat and into the Sundering Seas, which we can surmise is quite large … like Pacific Ocean large. Without missing a beat, she starts swimming (with excellent form) back towards Middle Earth. The longest open water ocean swim in our real, non-Tolkenian universe was accomplished by Pablo Fernandez in 2021, when he logged a shocking 155.34 miles off the coast of Florida. Thank goodness elves have super-strength and endurance because Galdriel’s swim appears significantly longer. And she’s clad in what looks like a cotton nightgown. You could count the wooden raft of castaways as a “support crew,” although they promptly throw her back into the water for The Worm to devour. Bad karma, my dudes.

Score: D. We cannot condone reckless under-dressing and lack of support in a body of water named after a violent past participle. Galdriel still sets a new open water record despite hypothermia, poor aerodynamics, and exposure to apex predators like The Worm. Very Type A.

In the final episode of Rings of Power, pure-of-heart Nori prepares for an epic expedition with The Stranger, her buddy and probably a younger version of Ian McKellen’s Gandalf (big surprise, Amazon Prime!) Her Harfoot family sends her off with what is essentially a wooden external frame backpack. This thing looks deluxe! We can see a rolled up blanket/sleeping pad strapped up high near her shoulders and a very sizable wicker basket that’s essentially a non-stretchy external pocket for stuffing layers. We know she’s packin’ a lantern too, thanks to a safety check from best friend and Samwise Gamgee facsimile, Poppy. Ding for not having a hipbelt, which means sweet Nori has to carry all of The Stranger’s Snail Snax ™, magic apples, and juicy, face-staining berries on her shoulders—a big no-no for backpackers. As for footwear? The Harfoots started that whole barefoot hiking trend in the first place. Nothing better than a set of hairy, callused trotters for traversing Middle Earth.

Score: B. With her rustic kit and excellent foot-powered genetics, we have no doubt that darling Nori is headed for a new FKT.

Síclovía will rejoice outside recreation in San Antonio on Sunday

Injured Rock Climber Is Rescued with a Piggyback

The Berkshire cat who loves climbing Snowdon along with his canine...