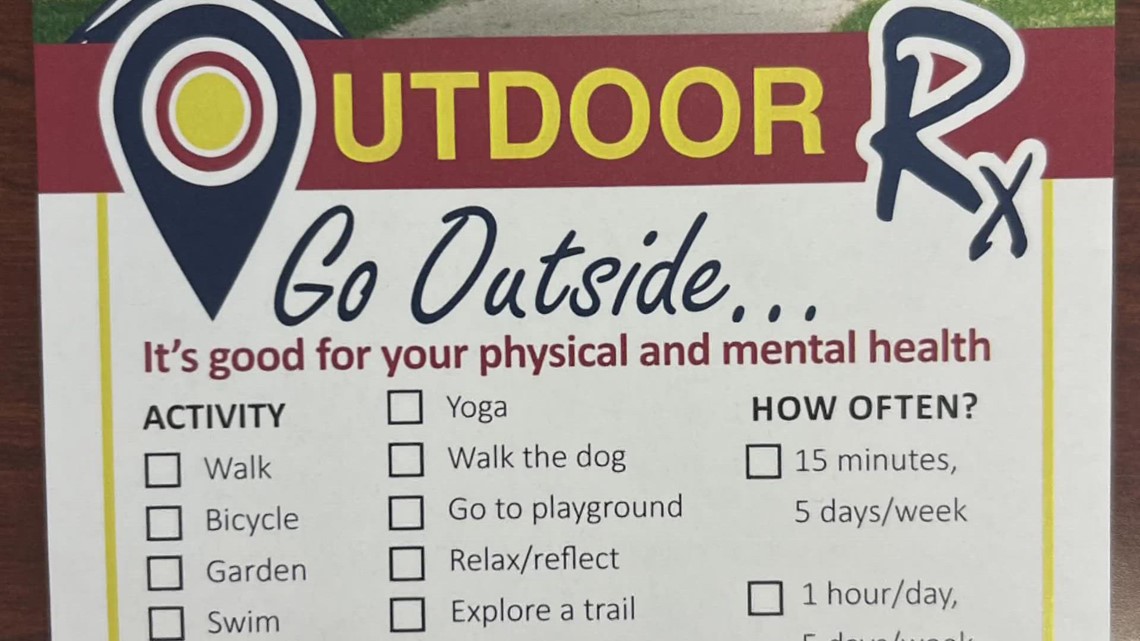 Some healthcare providers are now prescribing time outdoors to improve physical and mental health through the Outdoor RX program.

DENVER — Some doctors and therapists in Weld County are prescribing time outdoors to improve the health of their patients under a program called Outdoor Rx, which restarted this month.

It’s a simple idea that fits Colorado culture: Get outside and make yourself feel better.

Eric Aakko of the Weld County Department of Public Health and Environment said heart disease and high blood pressure are challenges there, along with rising obesity rates. He also said more and more people were struggling with their mental health.

That’s why the health department created Outdoor Rx. When the program started in 2018, health officials distributed thousands of Outdoor Rx-specific prescription pads. During this year’s reboot, they gave out another 4,000.

“When a healthcare provider writes a prescription, I want you to go outside for 10 minutes every day,” Aakko said. “People tend to do that.”

According to the Colorado Outdoor Recreation Industry Office, this is a unique idea in the state. However, it can be found in other places in the US and internationally, such as Canada.

The Canadian program’s website says the side effects of this prescription include living longer, better heart health, and less stress and anxiety.

dr Lynn Stiff, who practices family medicine at Greeley, said the general consensus is that spending two hours a week outdoors can have benefits.

“Just spending time in nature has health benefits,” Stiff said. “Just sitting with this houseplant can give me health benefits. Studies show that mood and stress improve just when I’m in nature.

“We don’t really know why,” she added. “But there’s an idea that how we grew up in nature is roughly evolutionary.”

If that time is spent outdoors doing exercise, that’s a bonus, she said.

“The third element is the connection,” she said, adding that former US Surgeon General Dr. Vivek Murthy brought to light the importance of social connections and the effects of loneliness.

Murthy previously told the Washington Post that shortening lifespan through loneliness is similar to smoking 15 cigarettes a day.

“Being out in nature doesn’t always mean connecting with other people,” Stiff said. “You might see other people, see animals, connect with them and that part of connectedness with the world.”

It says a lot about how people live their lives, connected online but disconnected at the same time. It takes some doctors and behavioral health professionals to write people a prescription so they can go outside.

The state is rethinking how to scale up programs like this, and a big part of that will be justice.

Green spaces and parks are also not always easily accessible for families. Colorado currently has grants and programs working on it and will also be exploring ways to make further improvements.

How one can make easy Carabiner Paracord Key Chain

Abbie is aiming excessive on the climbing wall

TOP ONE of the SMARTEST multi-tool!