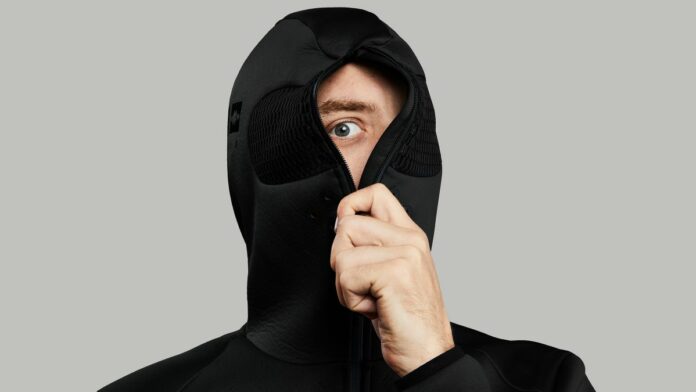 This whole Boy’s Own fantasia was arranged with military precision by Brady and Darren Roberts, Vollebak’s chief operating officer and a longtime friend of the brothers. Although Roberts, a tough ex-infantry man, only joined the company in 2020, he played an implicit if indirect role in its founding. The brothers jokingly call him “Dad.” He gets things done. They’d met years before, in the world of advertising. “We adopted Darren,” Nick says.

In 2009, the three men came across an irresistible challenge. A magazine had put out a call looking for a few guys to take on a series of famously grueling and hazardous endurance events. “We said, ‘Yeah, we’ll do that,’” says Steve. They knew that with their advertising prowess—they were then heading up the Adidas account in the UK—they could convince the magazine to pick them. But they first needed to compete in some local footraces, so they began training in earnest, getting “reignited into sport,” as Nick says. The magazine chose them, and over the next year, they competed in the Namibian 24-hour Ultra Marathon; the Ultra Trail du Mont Blanc, which circumnavigates the tallest peak in western Europe; and the Jungle Marathon, held in the Brazilian Amazon.

“That just took our life experiences instantly up to the next level, with a lot of stuff Steve and I have never experienced before,” says Nick. “What does running through the night feel like? What does running through the desert feel like? What does pissing blood feel like?” In Namibia, Steve says he got into trouble early on. Temperatures were hovering around 115 degrees, but “I was so cold my teeth were chattering, there were goose bumps on my arms. To this day, when I have a hot shower, my reaction is goose bumps.” Darren, he recalls with a laugh, told him—in the face of what was quite evidently heatstroke—not to tell the medics. “And I was like, I am definitely going to fucking tell them, because this is definitely wrong,” he says. “The doctor told me if I carried on, I’d have 20 minutes to live.” He decamped for a while to an air-conditioned Land Rover. Darren, for his part, won the race.

Going through the events produced a series of epiphanies for the brothers. The first was that they suddenly felt as if, as Steve puts it, they’d been “living life at 25 percent.” Advertising “simply wasn’t as demanding as running ultramarathons,” he says. “It was boring. You could do your work in a couple of hours a week.” The second was that time spent in the company of ultramarathoners made them realize that the people who do extreme sports “are some of the most experimental people in the world,” he says. “They make themselves test subjects: How far can I go if I eat this bar? What happens if I listen to this music at this mile?” And yet, Steve felt, so many of the brands catering to them were “relatively conservative, relatively predictable.” He remembers being in a tent in Namibia on the eve of the race, and being so wound up he couldn’t sleep. “I wondered, could a piece of clothing help me relax, help me sleep?”

This thinking ultimately led to the full-zip Relaxation hoodie, which, as the company website notes, came from a “brutal insight”: “Faced with cramped and isolated living conditions during any exploration or adventure, normally rational people would be tempted to stab their teammates with a fork just for the way they were chewing.” The Relaxation hoodie was designed to be like a go-anywhere tent in which you could nominally shut out the world. Vollebak went a step further and produced the first models in Baker-Miller pink, named after two military officers at the Naval Correctional Center, where a psychologist named Alexander Schauss reported that painting certain cells the namesake color had a calming influence on inmates. The actor Jon Glaser, who sported the hoodie as part of his short-lived TruTV show Jon Glaser Loves Gear, took it on The Jimmy Fallon Show in 2016, where he and the host, fully zipped up in pink, listened to chill-out music. “That was a conceptually complex piece of clothing,” says Steve, “in a really crazy sugar-pop-pink wrapper.”

If Namibia seemed like a revelation, Steve cautions against the tidiness of the story as he told it. It is true, he says, that there was a realization “in the desert, in the mountains, and in the jungle that, Hang on a minute, clothes aren’t as advanced as we’re made to think—maybe there’s something we could do there.” But there was no single lightbulb moment. “It was a series of very gradual lightbulb moments over the course of three years,” he says. “It was a very messy beginning.” Even from the point when they decided (with some guidance from noted Chiat\Day adman Lee Clow), “Hey, let’s launch a clothing brand,” says Steve. “It was two and a half years until we could get a product to market.”

The company tried to create a jacket that emanated blue light, inspired by the lighting system on the International Space Station. The only problem: Vollebak didn’t have the resources to run the proper tests to make sure it wasn’t going to blind people.

Part of the reason was that they had full-time jobs, families. But another reason was the huge learning curve required for the stuff they were trying to make. Their other initial product, the Condition Black jacket, was partly made from, as Steve describes, “these crazily tough three-dimensional ceramic panels.” It was, he says, “like a suit of armor—the factory broke literally thousands of needles trying to stitch this stuff on.” They spent four years on their Solar Puffer jacket, because, Steve says, “you’re trying to do so many different things in one piece of design—get it to glow, keep out rain, keep you crazy warm, and be white.”

Curiously, for a company so oriented toward the future, Nick says that he spends a lot of his time in the archives of materials companies. “Within archives are some of the most fascinating experiments—experiments that have gone wrong,” he says. The company’s Full Metal jacket, for example, was inspired by a material lurking in the bowels of the Swiss textile company Schoeller. It’s made mostly of copper, some 11 kilometers of bundled strands of the stuff. “You put a microscope onto each strand, which you can barely see, and inside, beneath the lamination, it’s got 50 or 60 more strands,” he says. “At which point you’re like, what the fuck machine built that?” They chose the material for its virus-resisting properties as well as its conductive properties; as much as material, the company envisions it as a sort of operating system, able to power the connected clothing of the future.

Not everything works out. Carbon-fiber hoodies were a failure. (“You can’t put that much carbon fiber in a hoodie,” noted Nick, “without the hoodie pretty much stopping moving.”) Clothing made from wood was also a nonstarter. The company tried to create a jacket that emanated blue light, inspired by the lighting system on the International Space Station. “If there’s a fire, the astronauts need to be really awake, and you can’t wait for them to have their coffee,” Steve says. And blue light—the glow also emanating from our smartphones that we’re supposed to avoid at bedtime—“makes you very alert very quickly.” The only problem: Vollebak didn’t have the resources to run the proper tests to make sure it wasn’t going to blind people.

From the shock troops of next-wave clothing, the company wants to evolve into an “innovation platform,” with what Steve describes as a “series of bonkers projects outside of clothing that take us into incredible new areas in architecture, robotics, and space.”

To that end, Vollebak, backed by funders ranging from Airbnb’s Joe Gebbia to ex-Rapha head Simon Mottram, is expanding. When I visited in October, it was on the verge of moving into a larger London office. The brand’s products are not sold in any stores, save for a truck stop in the Australian outback, a gag effort at being stocked in the world’s “most remote” store. And the brothers have even remoter digs in mind. They’ve purchased a small island off the coast of Nova Scotia for what Nick describes as “the cost of a garage in London.” Along with architect Bjarke Ingels, they want to run experiments on “in situ utilization,” as Steve calls it. “When we get to Mars, we’re going to have to use the stuff that’s there,” he says. “You’re not going to be dragging building materials there.” So, too, will the island feature architecture made from what’s there, from rock to kelp to thatch. They envision it as a sort of lived experience of the brand, reached via kayak by “people who like us.” It might be a prophetic statement about how we’ll have to live in a more extreme tomorrow, or it might be sheer quixotism. “No one’s got a crystal ball into the future,” says Steve. Everyone “is just having a crack.”

Campus Recreation celebrates the tip of the semester – The Blue...

Sen. Manchin’s management can shield our out of doors economic system...

Andrews to move newly created Workplace of Out of doors Recreation...