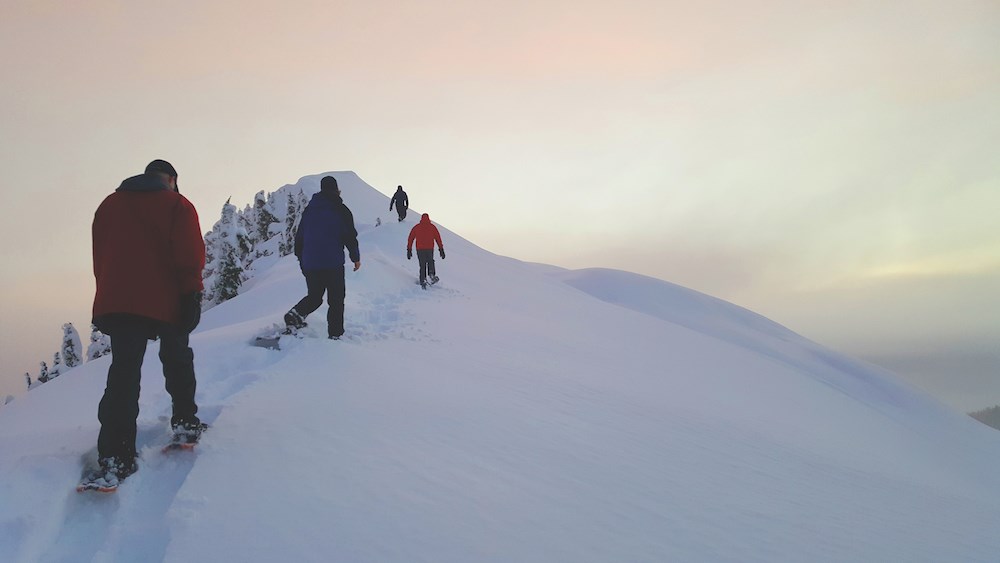 When it comes to backyards, the tetrahedron tends to be on the big side. Six thousand acres of mountains, lakes, streams, wetlands and forests make this premier provincial park northeast of Sechelt the perfect place for backcountry enthusiasts to explore.

It also makes the Tet, as it is affectionately known, an immensely challenging site for visitors. This daunting task is entrusted to the Tetrahedron Outdoor Club, a highly dedicated volunteer organization dedicated to maintaining the park’s four rustic cabins and the 25-kilometer network of trails that connect them.

“BC Parks owns the cabins and it’s their provincial park,” said club president Gerry Marcotte. “We are the managers of the park and have a great working relationship with BC Parks, which goes a long way in keeping these cabins and trails up to date.”

The most recent major project involving the club’s volunteers was the installation of a three-ton bridge over Steele Creek. The bridge, which was lowered by helicopter last month and installed by club members, cost about $20,000, of which $12,000 was funded in part by a grant from the Sunshine Coast Community Forest Legacy Fund.

It would have cost more without the donations from companies – builders, welders and lumberjacks. The mix of grants, donations, partnerships and resourceful volunteers carries on from a concept established more than 35 years ago.

In the mid-1980s, in the midst of an economic crisis, a group of backcountry enthusiasts banded together to mobilize more than 200 volunteers, 45 businesses, schools, community groups, and multiple levels of government: Their goal was to build cabins that could be crossed by a network of trails are connected.

The Tetrahedron Ski Club, as it was then called, secured more than $150,000 in federal funding and another $20,000 from the province to build the cabins at Sechelt Airport. The cabins would then be disassembled and flown in a helicopter to be reassembled on site.

An army of volunteers was mobilized to clear trails while 18 people worked on the huts, learning valuable carpentry skills and learning about surveying and wilderness first aid. By the time the booths opened to the public in 1987, the club had raised more than $300,000 for the project. Perhaps even more remarkable, a single great idea brought together government, business and local volunteers.

So what motivated such efforts then, and what still drives the club’s volunteers today?

“There’s a lot of people at Tet to chill out,” says longtime club member Melissa Rayfield. “I think the difference with volunteering is that it becomes meaningful recreation. I think any volunteer would think the same way; it’s part of their social life, part of the pleasure and fulfillment of having done something.”

Melissa’s husband, Danny Fleischhacker, agrees, adding that the loneliness and elements in the vast expanses of Tet can be hard to resist, especially in winter.

“When you go out in the backyard, out in nature, it feels like you’re going to hit the gas, hit the brakes and go slow, but look around,” says Danny, who admits he also enjoys going fast . “I really love skinning in a blizzard when the wind is blowing on me. (Skinning is the practice of gluing synthetic skins to skis, climbing a trail, and then skiing down it. Danny and clubmate Sam Preston particularly enjoy exploring ski terrain deep in the park, immortalizing perfect descents with names like “Heaven” is a half-pipe.)

Melissa and Danny are stewards of the McNair cabin and visit about once a month for maintenance and surveillance. (Visitors are asked to clean up after themselves, but that doesn’t always mean they do.) Gerry and his wife Ellen Steward Bachelor’s cabin. In between are Edwards and Steele cabins, each with their own stewards, the latter being the tallest cabin at the foot of 5,114-foot Mount Steele.

The cabins sleep 12 to 16 people on a first come, first served basis and are well equipped with mattresses in the loft, firewood in the basement, a kitchen counter and sink. The wood stove usually has the place toasty and warm within an hour.

Panther, Steele, and Tetrahedron peaks tower over the park’s 10 lakes and some of the oldest trees in the country. Amabilis fir, sycamore and western hemlock, yellow cedar and white pine are all found here.

For Melissa and Danny, winter means fun in the Tet; Summer means work. “It can take a Herculean effort from a small number of people to bring some of the projects to fruition,” says Melissa. “Trail cleaning never stops.”

The volunteers aren’t getting any younger either. “If you look at the group photos from the Steele Creek Bridge Project, the average age of the volunteers is under 60,” says Danny. “We need to lower that median age, not that our volunteers don’t have unique skills – there are some extremely hardworking people over 70. We all love the Tet and are very supportive of each other. There is never a lack of camaraderie.”

Financing is also a long-running issue for the association. Snow removal costs between $6,000 and $12,000 per year. Firewood is flown to the cabins at a cost of $18,000. Community members donate the wood, which is cut and split by club volunteers. (Visitors building bonfires outside the cabins in winter are a particular source of frustration for the club.) Then there’s cabin maintenance and major projects like the Steele Creek Bridge. A bridge over Chapman Creek will soon be needed.

Cabin takings of $10 to $15 a night help, but the club’s main source of income is the annual Banff Mountain Film Festival, held at Elphinstone Secondary School in Gibsons. Tickets for the February 3 event are on sale (see sidebar for details), which is also a great opportunity to learn more about the club and consider volunteering. Otherwise, the best way to register is online at tetoutdoor.ca.

“We welcome everyone with open arms,” ​​says Gerry. “We moved here in 2016 and were warmly welcomed and encouraged by the club and that is still true today. The people we’ve met, the friends we’ve made – it’s absolutely amazing!”

Letter to the Editor: This out of doors recreation invoice must...

Suggestions from the Cover: Carabiner Gates