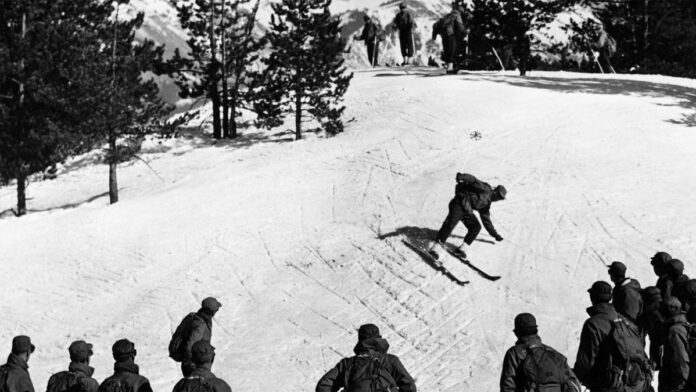 President Biden may soon designate his first new national monument, some sources predict as early as this month. What is Camp Hale, why does it need protection, and how did we get to the point where the Executive Branch might take action? I reached out to Senator Michael Bennet (D—CO), who wrote to Biden requesting the designation, to find out.

Constructed in 1942 as a training facility for the Army’s 10th Mountain Division, Camp Hale played a critical role in the creation of the U.S. ski industry—and subsequently, the larger outdoor recreation world.

“Many of the soldiers who trained at Camp Hale during WWII came back to Colorado to help start the outdoor recreation economy and now, veterans of the 10th Mountain Division come back to Colorado to find peace on our public lands,” Senator Bennet tells Outside. He’s referencing the recently passed, bipartisan Accelerating Veterans Recovery Outdoors Act, which recognizes the benefits outdoor recreation has on mental health, and provides significant funding to help veterans get outdoors.

Camp Hale’s location between Red Cliff and Leadville, Colorado, in the Eagle River valley, is what made it special. With an elevation of 9,200 feet, Camp Hale is situated right in the heart of the Colorado Rockies. The Army used those mountains to train troops in alpine and nordic skiing, winter survival, and mountaineering.

At the time, those skills were unique among world militaries, and the 10th Mountain Division would go on to put them to good use, climbing a treacherous ridge in Italy’s Northern Apennines to surprise Nazi troops, and dislodge them from artillery positions that were preventing allied troops from continuing their invasion into northern Italy. In that, and subsequent actions, the 10th Mountain Division experienced 4,072 casualties during WWII—992 killed and 3,134 wounded—nearly 30 percent of its entire strength.

Camp Hale’s importance to the ski industry cannot be overstated. The 1996 documentary about the 10th Mountain Division, Fire on the Mountain, credits its veterans with creating 62 American ski resorts, and says 2,0000 veterans who trained there would go on to become ski instructors. The Division’s surplus skis were a big part of what made skiing accessible to normal Americans after WWII.

Senator Bennet, along with Senator John Hickenlooper (D—CO), Colorado Governor Jared Polis, and Representative Joe Neguse (D—CO) are requesting that Biden use his powers under the Antiquities Act to permanently protect 28,676 acres around Camp Hale, along with 17,122 acres in the the nearby Tenmile Range where the 10th Mountain Division trained, to create the Camp Hale – Continental Divide National Monument. The areas are currently managed by the United States Forest Service.

Why Does Camp Hale Need Protection?

Today, only a few ruins remain of the former training base, but Camp Hale’s legacy forever altered the Eagle River Valley’s ecosystem.

To create a flat, level area on which to construct Camp Hale, the Army Corps of Engineers brought in millions of cubic yards of soil. The Corp also turned miles of the meandering Eagle River into a straight, uniform ditch, and drained surrounding wetlands. Asbestos, and unexploded ordinance, remain hidden in the valley’s soil. The changes to the area pose a threat to visitors, make the valley prone to flooding, and impair the environment’s capacity to support wildlife.

Proposed restoration efforts would attempt to return the river to something approximating its original course, restore wetlands, and make the area safe for visitors, while preserving what remains of Camp Hale’s structures. The National Forest Foundation even suggested retaining portions of that featureless ditch to help maintain the site’s character. Proposed efforts would enhance the area’s ability to support visitation and increase the site’s educational facilities so that future generations could better learn about the 10th Mountain Division’s legacy. Right now, Camp Hale lacks even a visitor center, and pollution from the area is able to simply wash downstream into the Colorado River.

A national monument designation would increase the funding sources available for restoration and facilities, while protecting the surrounding landscape from encroachment by residential and commercial development, and oil, gas, or mineral extraction, and would improve the health of the watershed.

The neat thing about national monuments is that each is able to operate on its own, unique set of rules, while maintaining access for historic or current recreational uses. The area is popular with snowmobilers and off-roaders, for instance, and the plan put forward by Bennet, Hickenlooper, Polis, and Neguse specifically calls for all current motorized trails to be retained in their current forms.

What’s Been Done to Protect Camp Hale so Far?

Coloradans have been working to protect Camp Hale for over a decade. In that time, the Continental Divide Recreation, Wilderness, and Camp Hale Legacy Act, the San Juan Mountains Wilderness Act, the Thompson Divide Withdrawal and Protection Act, and the Curecanti National Recreation Area Boundary Establishment Act have come together to form the Colorado Outdoor Recreation and Economy (CORE) Act.

The CORE Act was first introduced to the House of Representatives by Representative Neguse in January 2019, where it passed with 222 Democratic and 5 Republican votes in October of that year. It was then introduced to the Senate in February 2021 by Senator Bennet, but has since stalled in the Energy and Natural Resources Committee, stonewalled by Republican senators. That’s led the CORE Act’s supporters to pursue Executive action.

“This legislation has been built from the ground, up with years of dedicated stakeholder engagement and enjoys bipartisan support,” Bennet, Hickenlooper, Polis and Neguse write in a letter to the White House. “Regrettably, progress in Congress has stalled despite strong support in Colorado. The time has come to take the next step in protecting the key landscapes within the CORE Act and we need your help.”

“Specifically, we urge your action under the Antiquities Act to designate Colorado’s Camp Hale and the Tenmile Range as the Camp Hale – Continental Divide National Monument,” the letter continues. The history of this area, including the role it played in preparing the 10th Mountain Division for some of the most difficult moments of World War II, makes it the ideal candidate for a national monument designation. Many of the veterans of the 10th Mountain Division returned to Colorado after the war to establish our state’s outdoor recreation economy by starting the ski areas that Colorado is known for, further establishing the role Camp Hale and its veterans have played for our state and nation.”

What Do Opponents Say?

“For years, partisan big-city Democrats—with the full backing and support of the far-Left green energy cartel—have attempted to implement massive new land grabs through the so-called Colorado Outdoor Recreation and Economy (CORE) Act,” writes Represenative Lauren Boebert (R—CO), in a letter to President Biden opposing the designation. The letter is co-signed by eight other Republican Congresspeople, including representatives from Texas and Arizona.

“Radical Colorado Democrats are now calling on you to weaponize the Antiquities Act—an outdated 1906 law that permits the President to designate certain lands as national historic monuments—and apply it to key provisions of the CORE Act…We don’t support the efforts of extremist environmentalists who are seeking to hijack this historic place to create a new land designation—a designation that literally does not exist—to prohibit timber harvesting and mining on nearly 30,000 acres of land.”

While Bennet hopes that Biden administration will follow recommendations put forward in the CORE Act, the Antiquities Act grants the President final authority in designating national monuments. We won’t know the exact areas included, or the nature of the protections that will be established, until the designation is made. If it’s made at all. And, if recent history is anything to go by, any new national monument created by a Democrat will likely to face legal challenges from Republican politicians.

If the designation is made, one thing’s for certain: An intense spotlight will turn onto the history of the intersection between the military and the outdoor recreation world. And that’s going to add to a growing recognition that two are often intertwined in ways that benefit people, the environment, and our society.

Summer season Is Heating up Due to the Finest New Out...

The Scary Cherry Snowboarding Course at Baldface Is No Joke

Here is How COVID-19 Circumstances Are Climbing In Illinois In contrast...