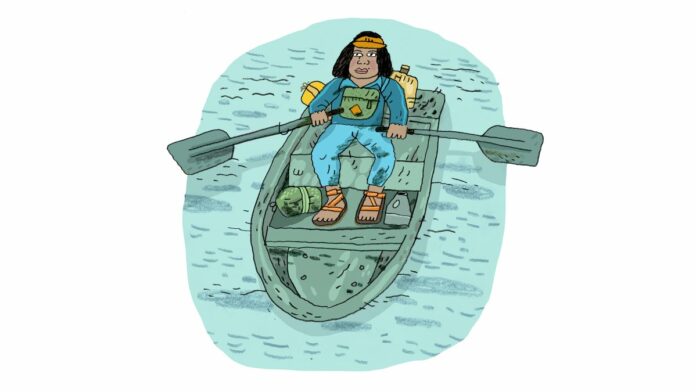 This article is part of Outside’s Sandal Battle. Vote for your all-time favorite here.

I distinctly recall the first time I heard someone bragging about their Chaco tan. It was April during my senior year in college—one of the first warm days after a long, gray Maine winter. As far as one of my classmates was concerned, it may as well have been national Chacos day. She proudly lifted one foot to show me the faint remainder of last year’s strappy tan line. It was time to start building it back up.

At the time, I laughed it off as quirky. Then I got a summer job guiding sea kayaking trips out of a campground on the Maine coast. Within days, I realized that my flimsy Crocs weren’t going to cut it. A typical day might start in the office taking reservations or on the docks carrying boats down to the beach. By 9 A.M., I was on the water for a four-hour paddling tour, which often included a stop to hike around one of the islands. Later that day, if I didn’t have an afternoon tour on the books, I might find myself answering phones or hosing down life jackets. After one week on the job, I drove an hour to the nearest gear shop to buy some Chacos of my own.

Those sandals were pretty much the only shoes I wore that summer. The lugged outsoles kept me upright on the steep seaweed-and-algae-covered docks. The secure strap system prevented my feet from sliding around, so I could shoulder tandem kayaks with confidence. The cushioned midsoles kept my feet happy even when I’d been standing for six hours. Swim, wade, hike, haul—I could put my Chacos on in the morning and not take them off until it was time to rinse away the salt and sand at the end of the day. Then I’d leave them out on the porch to air-dry while I showered and strap them back on to grab dinner in town with friends. By August, I was bragging about my tan lines too.

Don’t get me wrong—I definitely own three pairs of Birkenstocks. After a long run, the feeling of sliding my feet onto well-worn leather footbeds is among the best in this world. And Rainbow sandals will always be first in my pack for bouldering—they’re so light and easy to slide into a crash pad! But when it comes to those summer days when I don’t know exactly what I might encounter, there’s really only one pair of shoes that I want stashed behind the driver’s seat.

Have a good time Independence Day on the new Campus Park,...

Olly Murs praised after climbing off stage to test on fan...