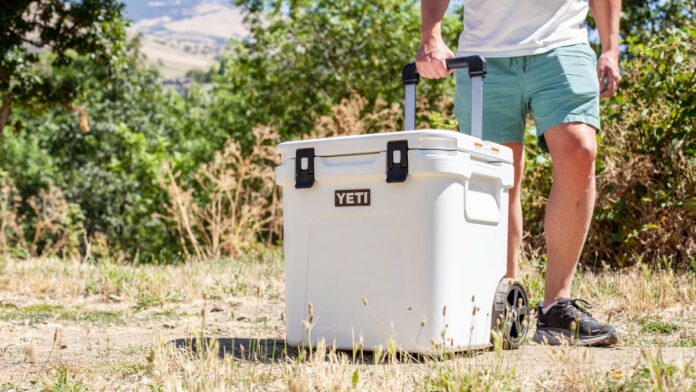 Yeti dropped two new coolers, the Roadie 48 and Roadie 60, last week. Every time the Texas brand releases a new product I find myself feeling like Bill Murray in “Groundhog Day”—as Outside’s Gear Guy, I’m flooded with inquiries about whether the new product is worth the price tag. But I’m used to it: some variation of this question is the one I’m asked the most in this position. To answer this eternal query, I’ve dropped trees on them, dragged them behind my car, and filled them with welding refuse and released them from a forklift. Depending on the results, the answers have varied from “absolutely” to “maybe” to “depends.” But after testing the new Yeti Roadie 48 for three weeks, I can say with confidence that it’s a totally worthwhile investment.

This is the most maneuverable hard cooler Yeti has created yet, and that’s a big deal. None of the brand’s products are light, so moving them around is often the crux of owning one. While it’s not the first wheeled cooler Yeti has built (that would be the Tundra Haul), this one uses a telescoping trolley handle, which more closely resembles a wheeled carry-on bag than the non-extendable, wagon-style handle on the Haul. It is also taller and thinner than its predecessor which adds to that maneuverability. I spent over three hours giving my 25-pound daughter rides around my front and back yards in this cooler in a testing/COVID quarantine multi-task. (Yeti has a large sticker saying not to put kids in coolers for obvious reasons, but since I was physically holding the cooler the whole time and my kiddo was having a blast, I did it anyway. We do not recommend this activity, although it provided good results.) During the test we rolled down stairs, ran through pea gravel, zig-zagged around raised beds, and rolled through deep dirt. The Roadie 48 thrived in each scenario. It really was remarkable, and will save me many frustrating truck-to-campsite trips in years to come. It would be an welcome companion for crowded tailgates, concerts, or beach days.

It was pretty cool when I tested coolers in my local college’s physics lab, but it honestly didn’t get me more information that is useful for your average weekend camping enthusiast. I kept this one simple. I put ten pounds of ice in the cooler with six lukewarm La Croixs. I took the temp of one La Croix from the same package, closed the cooler and rolled it to a full sun part of my back deck through a 93-degree weekend. I tested the temp of a La Croix at 48 hours and then monitored when it finally ran out of ice.

After 48 hours it delivered a frosty 38-degree La Croix. I pushed this test to four full days with highs in the nineties before all of the ice was gone and the La Croixs came out (at hour 96) at 67 lukewarm degrees. All in all: it meets the standards I hold for Yeti hard coolers. Is this a quantum leap when compared to other Yetis I have tested? No. Would I trust this cooler with raw meat on a three-day river trip? Absolutely.

I did not intentionally try to destroy this cooler. The bonded plastic is of the same quality and heartiness of the half-dozen Yeti coolers I have beaten to hell in the past and I closely combed all of the seams and found them to look both clean and sturdy. I did fill the cooler with 20 pounds of ice and drinks and swung the cooler by the telescoping handle in various contortions for a half an hour to make sure it didn’t fail. It felt as solid in hand as the single-piece metal handles in Yeti’s other rolling coolers. Credit the wide square shape of the aluminum telescoping parts and the brand’s dedication to toughness.

A hard cooler that thermoregulates well is always going to be heavy. All the more so when you load it up with food and drinks for a weekend. The 48, which I tested, is a great cooler for a family of four car camping for a weekend. The 60 would work well for a larger group or one family’s full week camping trip. The fact that this new cooler from Yeti makes moving a heavy load significantly easier brings me to one verdict: the Roadie is easily worth its high price tag.

Recovering Addict In Colorado Describes Falling To The Backside & Climbing...

Your 101 Information to Backcountry Snowboarding

How can folks help your challenge? Come to Indonesia and hike Mount...

As Ladakh Protests Over Rights, Omar Is Tenting In Kargil

He teaches mountaineering at his residence wall, Life Information & Prime...