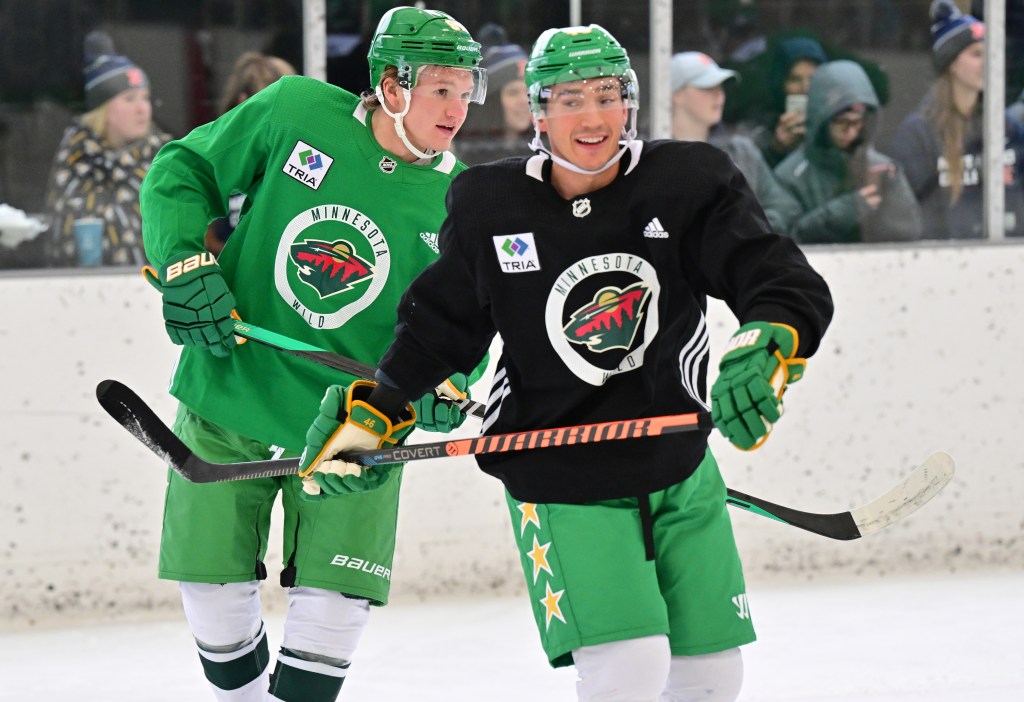 With hundreds of fans in attendance at the Recreation Outdoor Center at St. Louis Park Saturday morning, the Wild managed to entertain at their annual outdoor practice while also doing some meaningful work ahead of the West Coast road trip.

After giving his players Friday off to recharge their batteries, coach Dean Evason urged them to push themselves on Saturday, even though the environment was atypical for a workout at the TRIA Rink in downtown St. Paul. That’s exactly what he got during a spirited 30-minute workout.

“The fans generate a lot of energy when the kids are screaming,” Evason said. “It’s definitely a fun day.”

Most of the practice focused on offensive zone work after the Wild failed to score in a recent 4-0 loss to the Seattle Kraken. They’re hoping to turn things around next week with games against the Los Angeles Kings and Anaheim Ducks in Southern California before a rematch with the Kraken in Seattle.

“We could have ended up playing a game or something. We didn’t do that,” Evason said. “We wanted the guys to be business-savvy and go about their jobs and get their legs and minds moving. We had great energy today. We asked them to push themselves and we thought we got that out of them.”

Undoubtedly, winger Jordan Greenway was the most notable player to take part in outdoor training.

After missing the last few games with an upper-body injury, Greenway appears poised to return to the lineup. He skated alongside Joel Eriksson Ek and Matt Boldy, and Evason said Greenway will likely return in either the front or back end of the back-to-back with the Kings and Ducks.

“We’ll have to see how he feels tomorrow and then he’ll get another skate,” Evason said. “Honestly, our thought process is that maybe a back-to-back is a bit much at first. We will see. If he plays the first game, then maybe. If not, hopefully he’ll play the second game.”

When asked why the Wild will be cautious with Greenway next week, Evason replied, “I don’t care about the injury, it’s difficult. We don’t want to throw him too much.”

It sounds like winger Marcus Foligno could also do the west coast road trip. He was skating alone on Saturday morning and is getting healthier after missing the last few games with an upper-body injury.

“We’ll see how he comes out of this,” Evason said. “He could possibly come with us.”

Wingers Ryan Hartman and Brandon Duhaime, both absent with upper body injuries, will both not travel with the team.

Out of doors Gasoline Burner Market to Witness Beautiful Development –...

Summertime brings the high-quality and nice distress of tenting, and ideas...