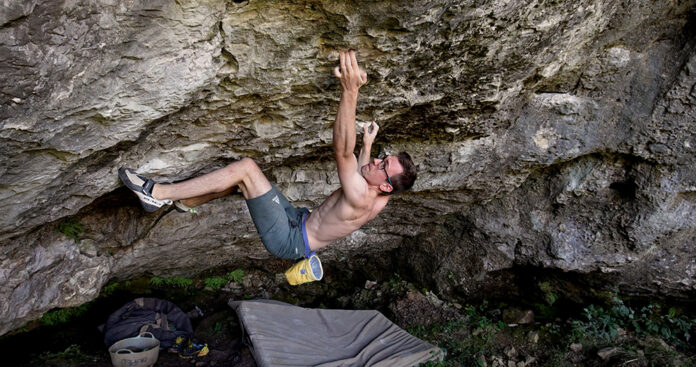 Scottish rock climber William Bosi has made the first ascent of Honey Badger, an 8C+ boulder problem at Badger Cove in the Peak District, UK.

Will Bosi has established Honey Badger, a major new boulder problem at Badger Cove in the Peak District with the proposed grade of 8C+. The boulder is twenty-two moves long from the base of the crag and navigates the steepest section of wall moving through tiny holds before joining the upper section of Rampant Rabbit (7C) and gaining the final jugs on the Dan Varian classic Bewilderness (8B+), leaving only the treacherous top out via the gully.

The boulder took Bosi five sessions to complete with a stopper deadpoint move from a tiny crimp to a two-finger sized pocket being the crux to unlock the whole problem. Bosi took advantage of the prolonged dry weather to clean the steep section which previously stayed damp all year round. With the assistance of established Peak District bouldering developer Ned Feehally, they were able to clean the rock and ensure it was stable enough for the ascent.

Bosi commented “This is by far the hardest boulder problem I have done to date and one of the best. The climbing is so varied throughout from technical at the start, through to raw power and eventually hanging on for dear life at the end!”

Bosi continues “I say this is a boulder but it is funny to think that this has twenty two moves of hard climbing and is a boulder problem and Brandenburg Gate (Bosi’s first ascent sport route at Raven Tor) only has 7 hard moves and is considered a sport route. Climbing is a funny sport!”

Commenting on the grade, “This was a step up from the previous 8C’s I have done at Badger so in that regard, I felt the 8C+ grade is warranted but the margins at this top level are so fine I would happily be persuaded otherwise. Hopefully, I get the opportunity to try some other boulders at the grade and I can start to get a sense of where it is but for now, I will leave it at 8C+ and hopefully some strong climbers will come and give it a go.”

The problem joins Aidan Roberts’ Superpower and Isles of Wonder Sit as the UK’s only boulder problems at the grade of 8C+. All three are currently unrepeated.

Greatest Outside Weekend of Yr

Startups in U of A’s out of doors recreation incubator showcase...