One day last summer, trail designer Mariah Keagy climbed a hill in Waitsfield. She climbed over tree trunks and under branches and checked her GPS again.

Audio for this story will be released.

“So my goal is to have just enough side slope to make sure we have adequate drainage,” said Keagy, partner at Sinuosity, a Stowe-based trail development company.

Mariah Keagy marks a trail she designs in the Scrag Mountain Town Forest in Waitsfield.

During the pandemic, beautiful places like this one saw a lot more runners, dog walkers, and day hikers. And according to the Outdoor Industry Association, more than 60% of Americans surveyed said they would continue these activities.

In Vermont, this has led the trail industry experts to think about how to sustain the increase in traffic.

These were all things Keagy thought about as we made our way to a waterfall.

“So we have this beautiful natural feature that we want people to point out,” she said. “The question is: are we going to do the entire main path in that direction? Or is it a spur? Do we invite everyone to see the waterfall on their way up? Or is it going to be something that you have to try a little for? “ 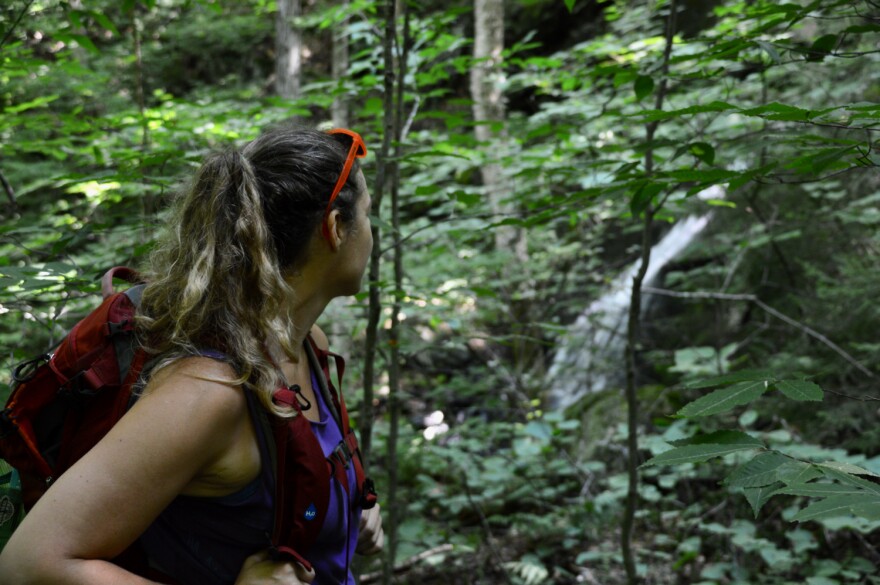 Mariah Keagy, partner at Sinuosity Trail Designers and Builders in Stowe, looks at a waterfall she is trying to build into a new trail in Scrag Mountain Town Forest in Waitsfield.

Both have advantages and disadvantages, she emphasized. For example, all of these dogs may be cute along the way, but they poop, trample, and dig. Too much pedestrian traffic near water can accelerate erosion.

Sustainability on hiking trails does not only mean dealing with ecology, water or elk habitat.

According to the Vermont Trails Alliance, over 70% of the state’s recreational trails are on private property, so sustainable relationships with property owners are also vital. 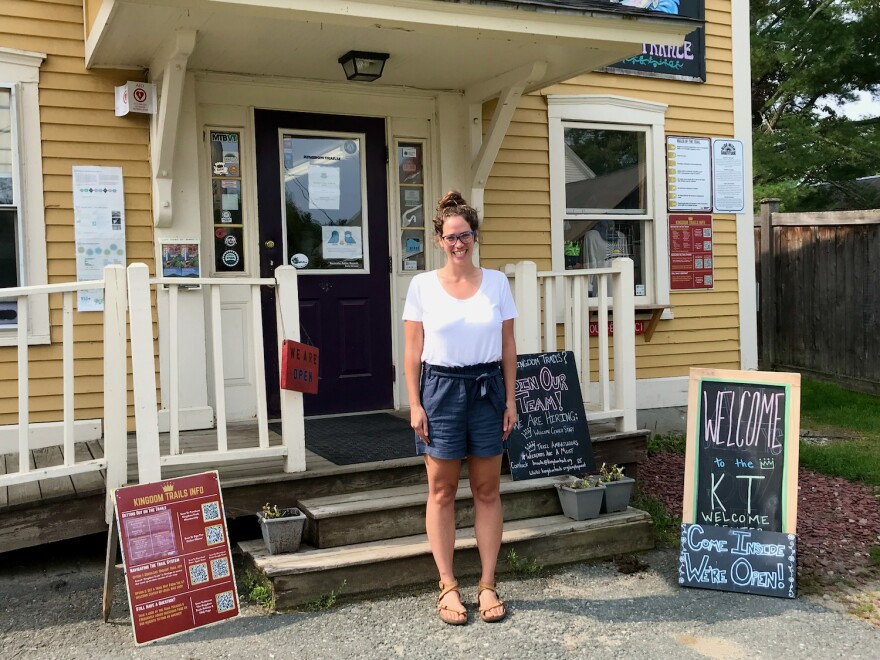 Abby Long is the executive director of the Kingdom Trail Association, a nonprofit that services approximately 100 miles of multi-purpose trails in northeast Vermont. From 2013 to 2018, mountain bike traffic here increased by 132%, according to Long. And while pandemic-induced travel restrictions limited that growth, she said passenger numbers rebounded over the summer.

Abby Long knows this only too well. She is the executive director of the Kingdom Trail Association, a nonprofit that manages 160 miles of multi-purpose trails in northeast Vermont.

On a Wednesday in early August, a steady stream of mountain bikers came and went in the parking lot near the Kingdom Trails Welcome Center.

The popularity of these trails grew long before the pandemic. According to Long, mountain bike traffic increased 132% from 2013 to 2018.

Connecticut-based Athena McAlenney is a perfect example. She got ready to ride a horse with her two young sons.

“We got a condo up here in Burke Mountain last fall and we went skiing during the winter season when the boys were in correspondence school,” said McAlenney. “And now we literally got our first mountain bikes in May and this year we are on the trails of the kingdom for the first time.” 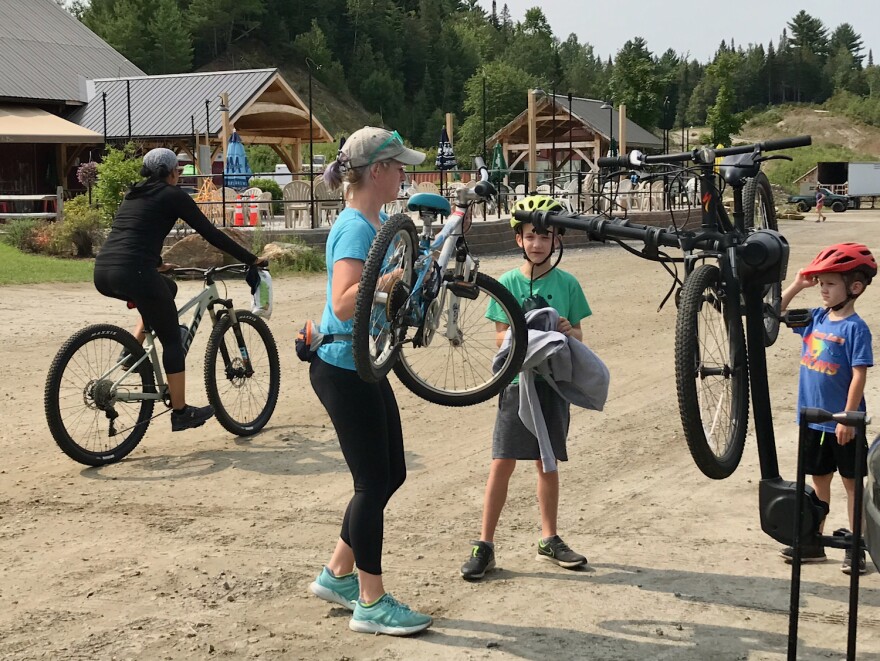 Athena McAlenney, of Westport, Connecticut, helps her sons prepare for a ride. “We literally got our first mountain bikes in May and this year is our first time on the trails of the kingdom,” she said. She and her husband bought a condo in Burke last fall when their son’s school was out of the way. She says activities like skiing and mountain biking felt safe this year.

Long is thrilled to have her and the many other first-time riders.

But everyone who uses the paths has to make one thing clear: “It is a privilege to be here and to have access to private land.

Long has good reason to emphasize this point. In late 2019, the Kingdom Trails community was shaken when three landowners restricted access because of bad biker behavior.

“So … it’s my responsibility as the leader of this organization to make sure that this doesn’t happen again,” she said.

Long says they committed to better communicating with property owners, created a code of conduct for trail users, and expanded their Ambassador program.

“People we pay to be present on the go, these people are there to provide information, but also to hold people accountable,” Long said.

The nonprofit also worked with local leaders on a capacity study that Long said will help them align future development with community needs.

“We now have recommendations for safe traffic flow, safe pedestrian crossings in the middle of the community,” said Long, “and an ideal location for the Welcome Center.”

The results of the study will also help them better integrate things like parking, signage, water and bathroom needs into each new path.

Long said land protection is another tool that helps them maintain their network of trails.

The nonprofit partnered with the Vermont Land Trust and others to buy 271 acres in Lyndon, much of it owned by former Jay Peak owner Ariel Quiros. The contract, which was signed last year, ensures that several miles of popular hiking trails will remain open to the public. 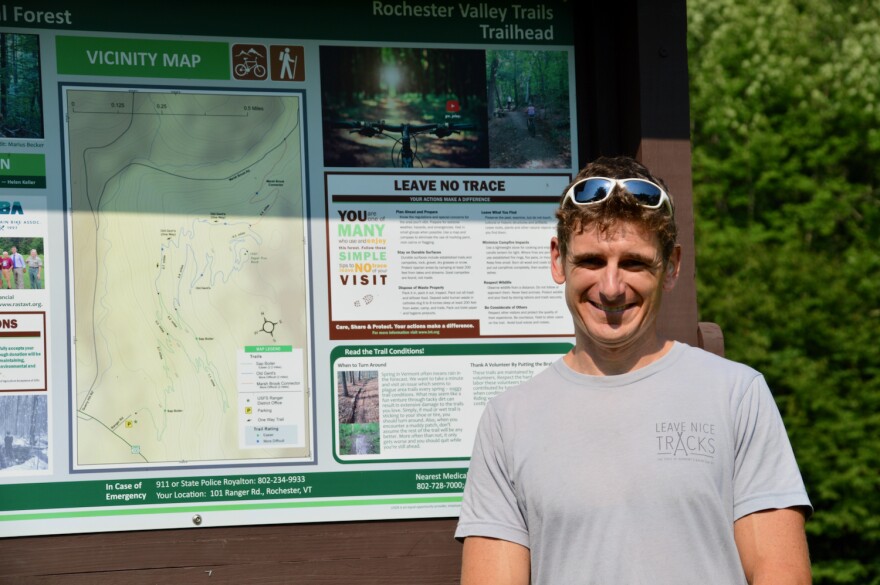 Angus McCusker leads a group working to create the Velomont Trail, a partnership between 19 hiking trails in Vermont and the Vermont Huts Association that aims to connect the state’s hiking trail network from Canada to Massachusetts.

Angus McCusker believes another way to preserve the state’s recreational bike path networks is to connect them.

McCusker has worked with private landowners and state and state foresters in the Rochester area for years on developing multi-purpose trails.

He also leads ambitious efforts on the Velomont Trail, which would run from Canada to Massachusetts.

“It’s a new approach to mountain biking, but it’s proven itself in Vermont and is helping people spread across your state,” he said.

McCusker and others believe this not only helps with the increasing congestion, but can also be a great economic engine for the state and fund the ongoing upkeep of the trails. 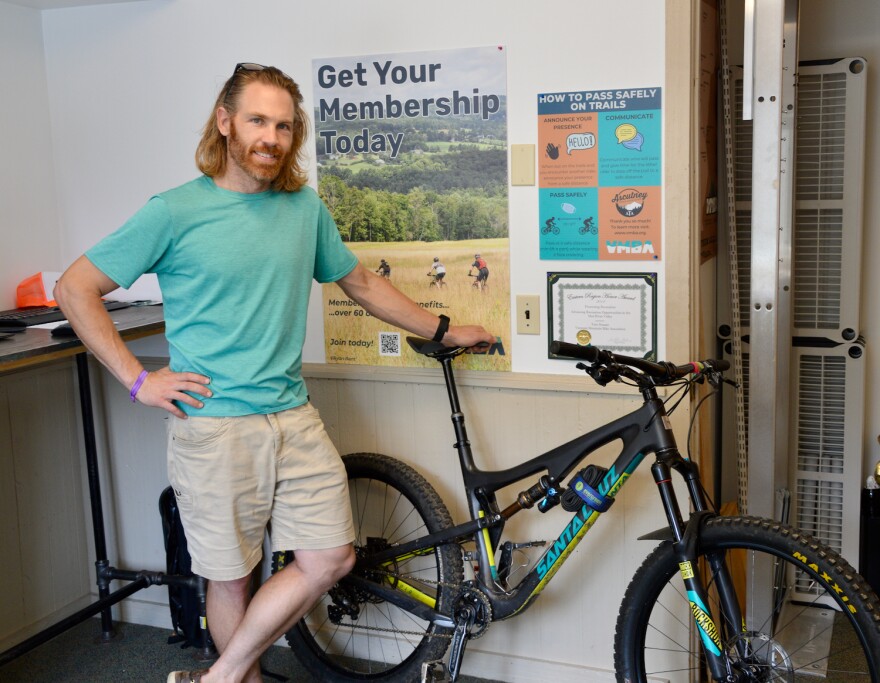 Nick Bennette, executive director of the Vermont Mountain Bike Association, hopes lawmakers will update the state’s Act 250 licensing process to better support the development of recreational trails, something he believes has tremendous potential as an economic engine for the state Has.

Nick Bennette, executive director of the Vermont Mountain Bike Association, agrees, and believes the governor and other state officials see the potential for outdoor recreational activities. And he says groups like the Vermont Trails and Greenways Council help create a unified vision for thoughtful trail development.

However, he believes these efforts will stall if the state’s Act 250 licensing process for trail development is not updated.

“Everyone recognizes the need to modernize and understand that trail building has evolved over the past 20 years,” said Bennette, environmentally sustainable trails that are socially beneficial, and we follow practices and the like. “

Trail enthusiasts also want state lawmakers to create a tax credit or other reward to encourage landowners to keep their property open for public recreational use.

“And I don’t know what that looks like,” admitted Abby Long of Kingdom Trails. “Perhaps in the form of something similar to the current forestry utility program that has a tax credit that includes recreation along with logging and conservation.”

Long, who serves on the Vermont Trails and Greenways Council and the Vermont Outdoor Recreation Economic Collaborative, says these talks are taking place at the state level.

Do you have any questions, comments or tips? Send us a message or contact reporter Nina Keck @NinaPKeck.