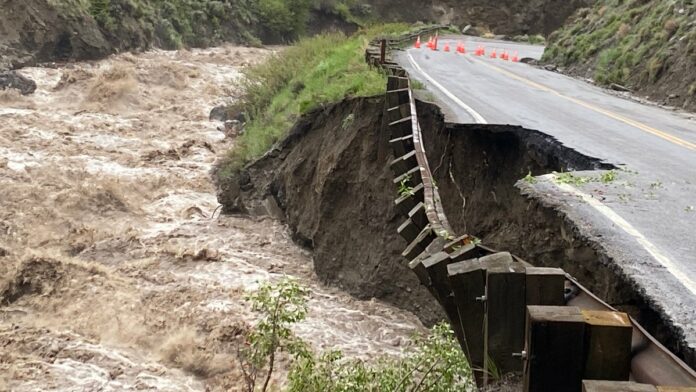 Amid unprecedented flooding, Yellowstone National Park has closed all of its entrances and is evacuating all visitors in the park. Videos and photos from the scene show extensive damage to major park roadways. According to a Park Service release, Yellowstone is likely to remain closed for a substantial period of time.

Local communities are also being heavily impacted, although at this time there are no reports of injuries or deaths. Both Gardiner and Cooke City, Montana, at the park’s northern and northeast entrances, respectively, are reportedly completely cut off due to flood waters.

Videos and photos posted across social media demonstrate widespread destruction, with houses and bridges swept away.

“It’s bad, really bad,” said Forrest, Rowland, a wildlife guide who lives in Gardiner, on Tuesday morning. While the guide’s house is safe from the flooding, he’s lost electricity and running water. He was attempting to contact a helicopter to fly he and his partner out when we last spoke.

An Instagram video posted by outdoor retail brand Simms Fishing, which is based in nearby Bozeman, Montana, reports that the Yellowstone River, which runs north out of the park through Gardiner, is running at a record 50,000 cubic feet per second. The previous record, set in 1918, was 30,000 CFS.

Another widely distributed video shows a house in Gardiner being swept away in that river.

The flooding is being caused by a weather event known as an  ‘atmospheric river,’ and it has dumped “200 to 300 percent of normal moisture” onto the area over the weekend, with rain falling on watersheds already saturated by seasonal snow melt. Many river basins in southwest Montana were at 200 percent or more of average snowpack last week. Mid-June already sees rivers reaching flood levels with that runoff; adding huge amounts of rain on top of that is what’s taken them to record levels.

And all that rain falling on already saturated soil has also caused mud and rockslides, further impacting roadways houses and town, even in areas the floodwaters haven’t reached. “This looks to change the park for many months to come,” said Rowland.