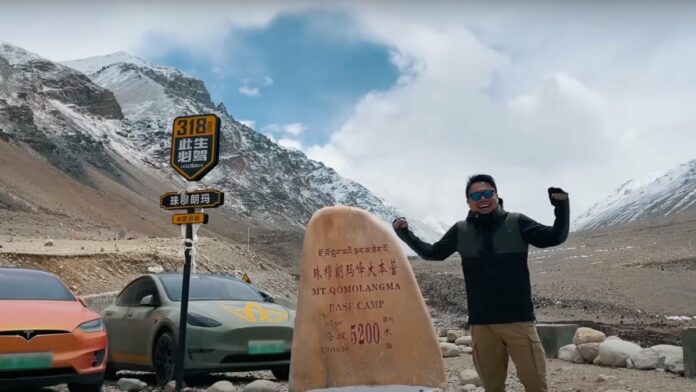 Last week, a pair of Tesla owners drove their electric vehicles into Everest Base Camp North.

The feat is not necessarily an impressive test of the car’s performance at high altitude or on rough terrain. Electric motors don’t require oxygen, so they can operate even in the vacuum of space, and EVs are routinely drive in sub-zero temperatures. Plus, Base Camp North sits at just 16,900 feet, and China completed a paved road to it eight years ago (not to be confused with the Nepali Base Camp South, which requires a ten-day hike to reach). Busses carrying tourists routinely drive into the camp.

It’s also not an impressive indication of the EVs’ range. The distance from the camp to the nearest Tesla Supercharger station is only 60 miles, and a Tesla Model 3 can return up to 358 miles of range.

What is impressive is the fact that there’s a Tesla Supercharge station located just 60 miles from Mount Everest.

China has over 2.2 million EV charging stations, a number that’s increasing monthly at a rate that exceeds the total number of EV charging stations in the United States. The U.S. only has a total of 108,000; China built 112,000 in December, 2020, alone.

As a couple of Tesla owners driving right into Everest Base Camp North indicates, China’s EV charging station network also covers rural and remote areas. That’s a notorious problem here in Ameristan, where most stations are concentrated in cities in only a handful of states.

Take Montana, my home state, for instance. There’s a grand total of 64 EV charging stations across the entire state, compared to the 13,658 located in California. And that’s a problem for people like me, who would very much like to own a zero-emissions vehicle, but can’t, since we just don’t have a place to charge them.

This weekend, my wife and I invited a friend visiting from California to join us at our cabin, near Glacier National Park. But that friend had to decline, after mapping out the route, and realizing their Rivian R1T simply couldn’t make it. Meanwhile, a couple dudes in China just drove straight to Mount Everest in their Teslas, without any evident planning or hassle.

The barrier to EV adoption in this country remains infrastructure. Without massive public investments in clean energy, transmission networks, charging stations, and more, we’re not only falling behind the rest of the world, we’re continuing to worsen the climate crisis even as we’re already experiencing its disastrous impacts.